Summer Changes in the Mansion 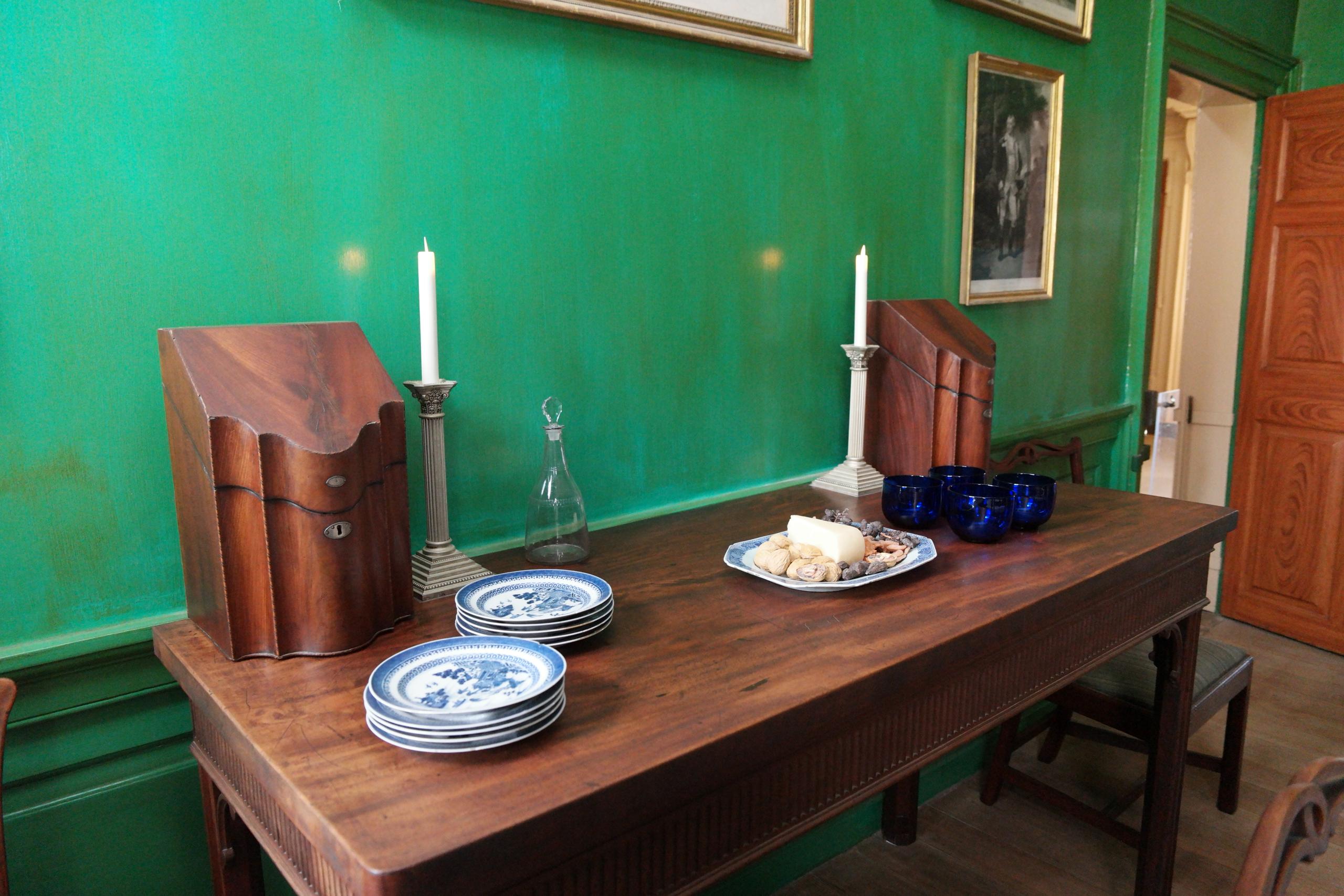 To celebrate the start of summer, the collections staff made some changes to the Mansion. The scenarios in the New Room, Dining Room, Washington Bedchamber, Butler’s Pantry, Kitchen, and Greenhouse Slave Quarters reveal this seasonal change. 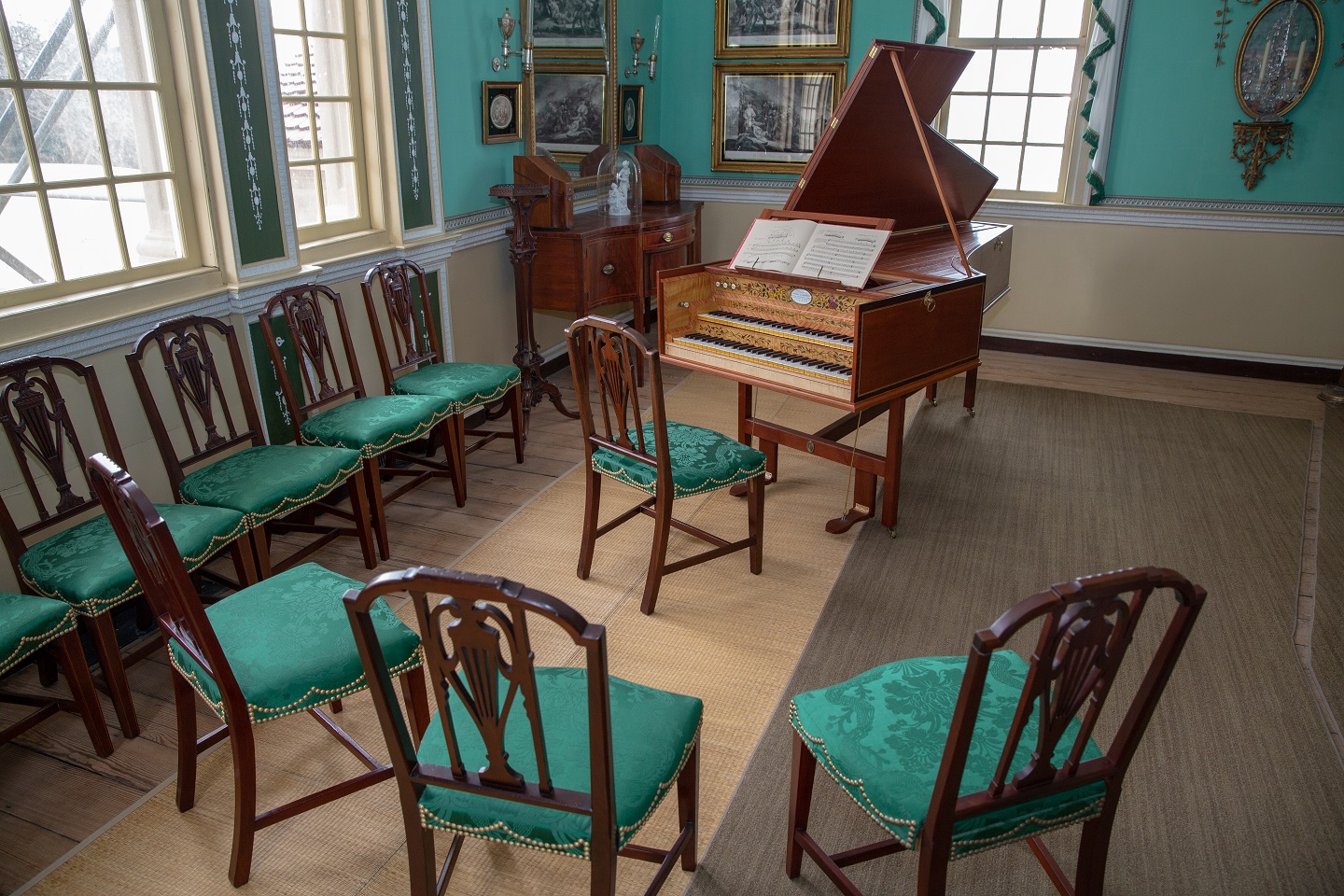 A striking addition to the New Room remains “Nelly’s New Harpsichord.” This replica of the original instrument belonging to Eleanor (Nelly) Parke Custis was recently completed after two years of intensive work by John Watson, retired conservator and curator of musical instruments at Colonial Williamsburg. The New Room is set with a cluster of chairs arranged near the harpsichord awaiting Nelly’s performance of a small informal concert. The chairs are positioned behind the player to her right, where the acoustics were best and Nelly’s hands were visible playing the keyboard. 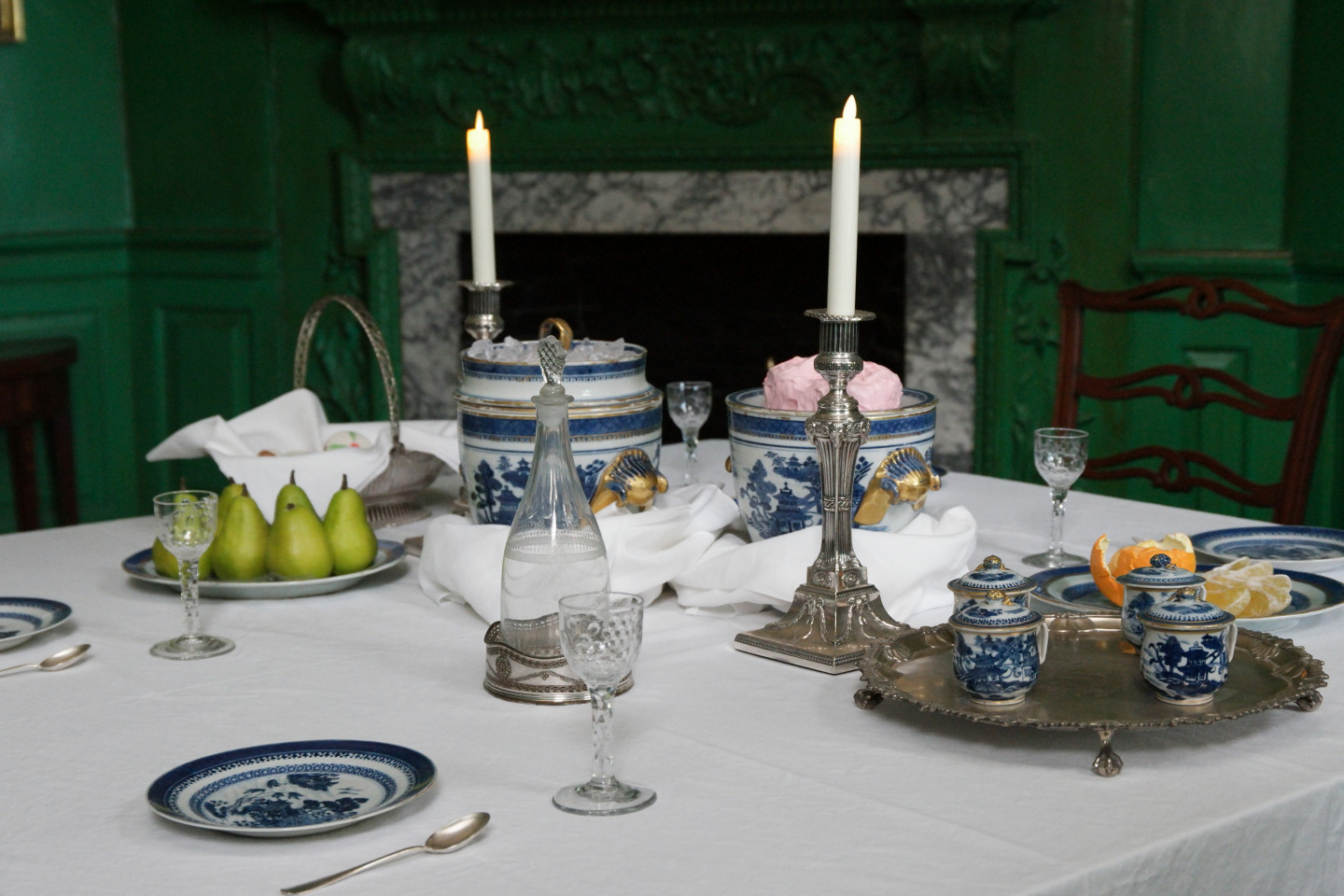 A pair of blue-and-white Chinese export dessert pails, also called iceries or glaciers, takes center stage in the dessert course offered in the Small Dining Room. The strawberry ice cream made in the Kitchen by enslaved cooks was dished into the dessert pail and ice was packed around the liner and onto the lid to keep the delectable contents chilled. Eighteenth-century porcelain services often included such pieces for the serving of this fashionable dessert. The French white-and-gold porcelain service George Washington purchased from the Comte de Moustier in 1790 included “2 Iceries compleat,” “12 ice plates,” and “36 ice pots.”

Other sweets tempting guests include tarts in the silver basket, crèmes in the covered cups, and fresh plums and pears in the pierced porcelain baskets. A final course of dried fruits and nuts sits on the sideboard. Once the ice cream course was complete, guests retired to the New Room to hear Nelly Custis play the harpsichord.

The enslaved house servants replaced the white dimity curtains from the Washingtons’ bedstead with a shield of mosquito netting. This lightweight material protected against mosquitoes and other pests while still allowing cool night breezes to pass through during the sweltering summers along the Potomac River.

Dishes and tablewares used in earlier courses of the dinner taking place in the Small Dining Room were removed from the table and placed in the Butler’s Pantry by enslaved waiters. 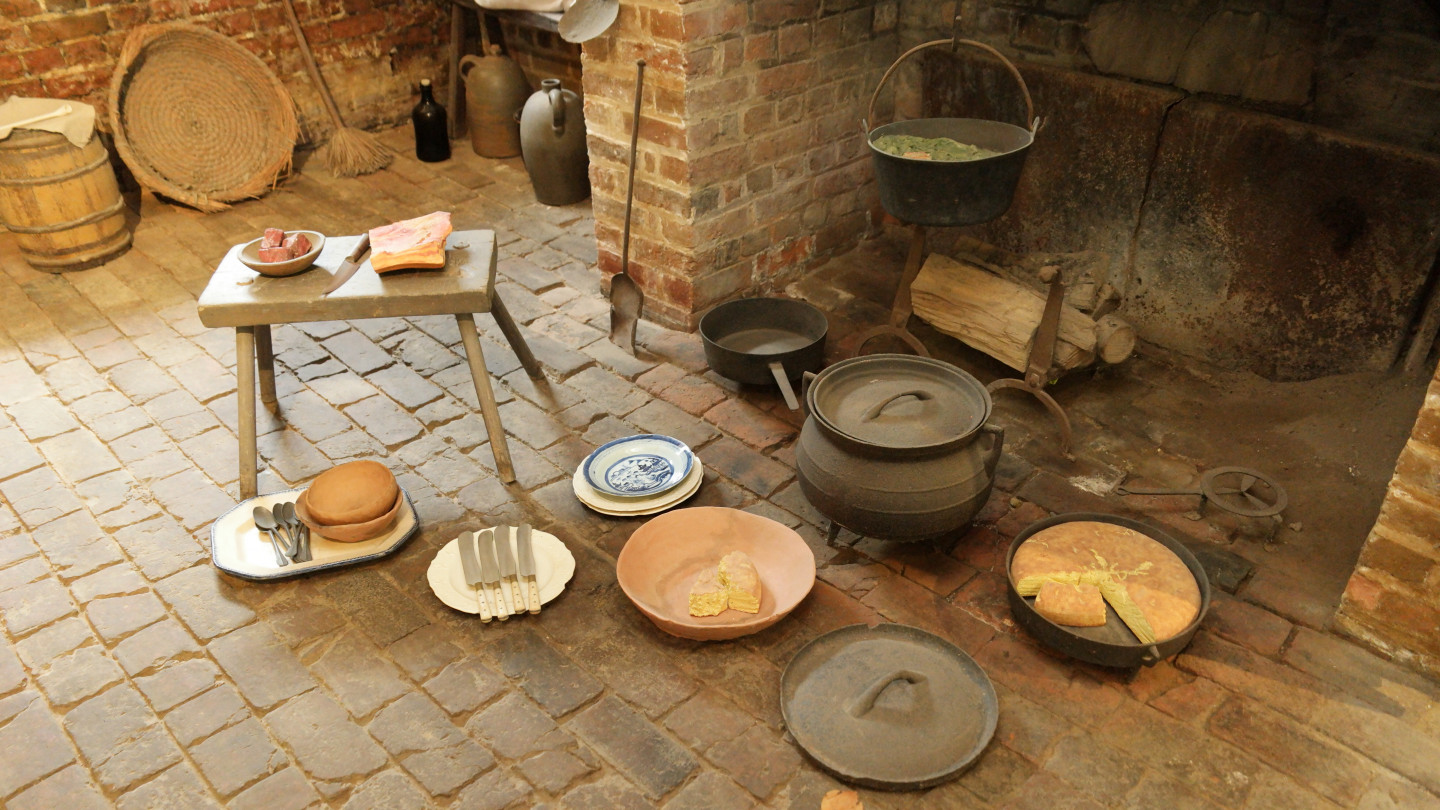 New summer fruits and vegetables have been introduced to the Men’s and Women’s Sleeping Rooms in the Greenhouse Slave Quarters. Many of the slaves at the Mansion House Farm tended small gardens. Based upon botanical remains excavated at the House for Families site possible fruits and vegetables in the Slave Quarters include musk melons, pattypan squash, cucumbers, peaches, cherries, and peanuts. In addition to supplementing their diet, Mount Vernon’s enslaved community sold some of this produce to George Washington, including melons and cucumbers. Nat, Davy, Sambo, and Isaac are all known to have sold honey to George Washington. These men may have kept bees or collected honeycombs in the surrounding woods. 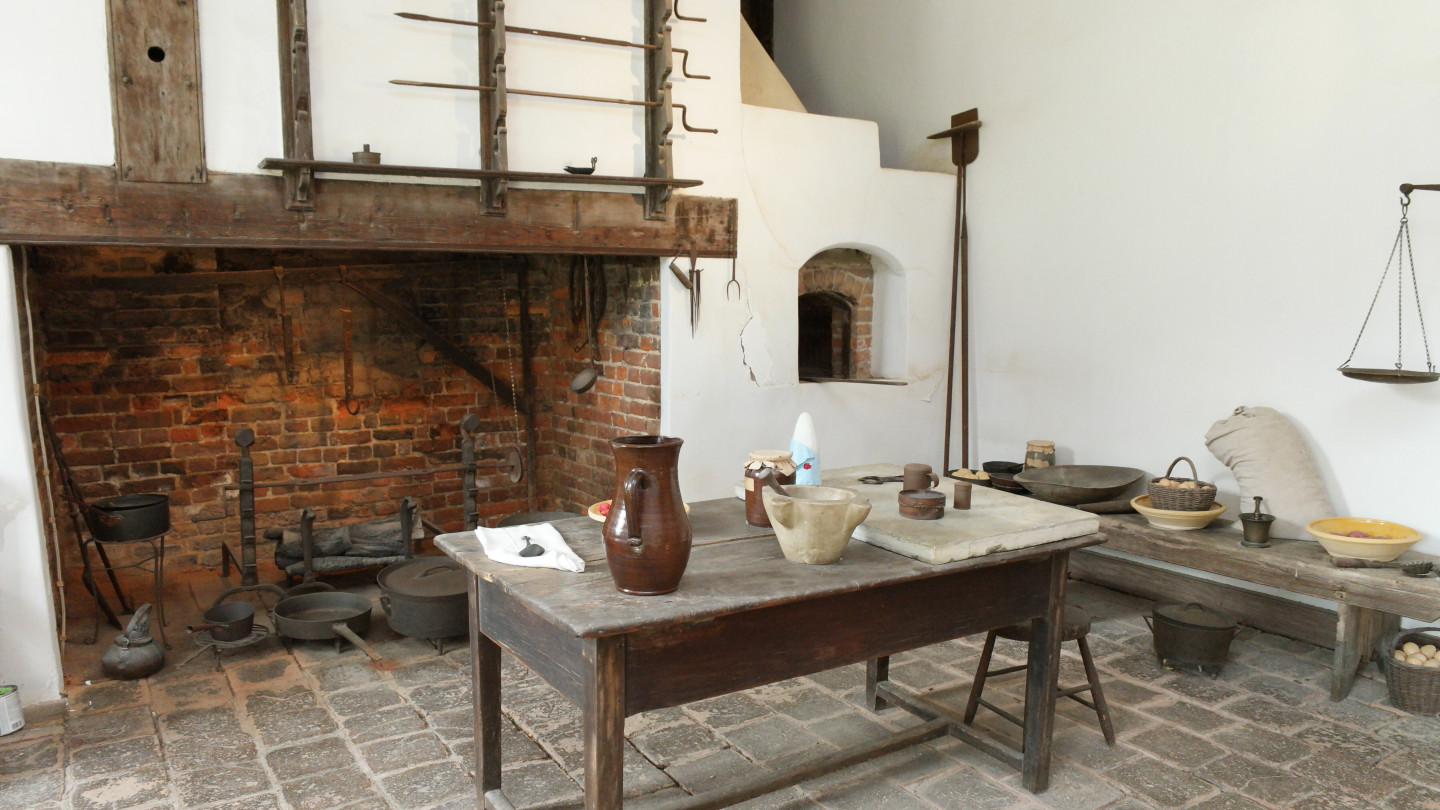 The Kitchen has once again become the spot for making a favorite treat of the Washingtons: ice cream. On the floor in front of the table, a wooden bucket holds a tin ice cream freezer packed in ice and salt. Cream, sugar, and flavorings (such as fresh strawberries) were added to the freezer, which was then turned by hand using the handle built into its lid. Sugar nippers, a mortar and pestle, a sifter, and an earthenware pitcher are displayed nearby.

George Washington’s accounts include several purchases of utensils for preparing and serving ice cream, including a “Cream Machine for Ice” in May 1784 (the first reference to the dessert at Mount Vernon), as well as ice cream molds and an ice cream spoon (purchased in Philadelphia in June 1796). During Washington’s presidency, Mrs. Washington is known to have had ice cream served at her weekly Friday levees. Attesting to the dessert’s popularity at Mount Vernon, the inventory taken after George Washington’s death lists two pewter ice cream pots, valued at $3.00, and another eight made of tin, valued at $1.00, stored for the winter on the second floor of the Kitchen. 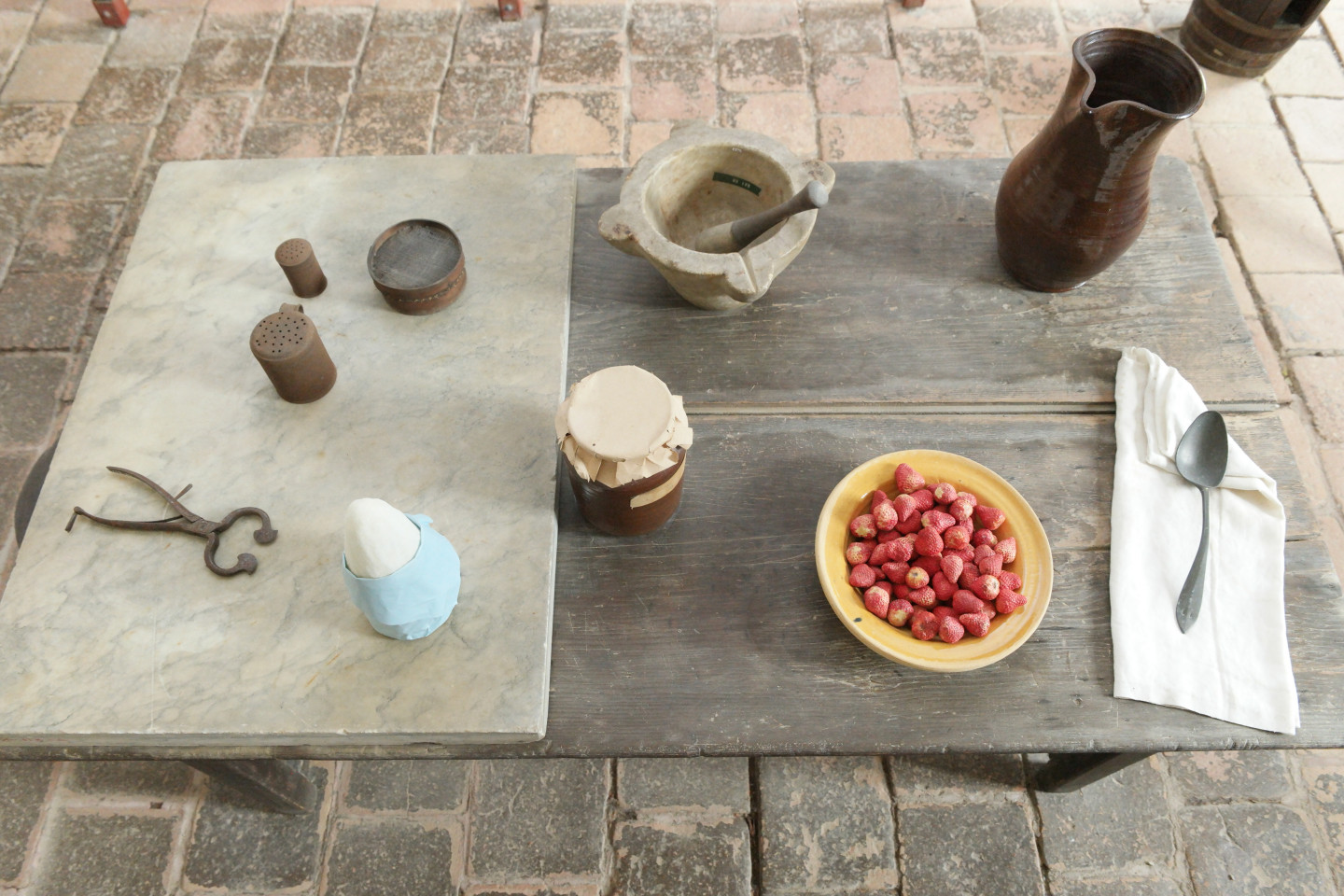 The strawberries in the yellow earthenware bowl might be some of the first fruits born of the “few seed of the Scarlet Alpine Strawberry” that George Washington received as a retirement gift from Winthrop Sargent of Cincinnati (then part of the Northwest Territory) on June 16, 1798. Sargent boasted that this variety “produces most excellent Fruit during all the Summer and Autumn and which have not been till lately known to me in America – for twenty Years I was unsuccessfully essaying to procure it.” Mount Vernon’s Horticulture team reestablished a “berry bed” in the Fruit Garden and Nursery, installing 600 strawberry plants, 30 red currants, and 30 red gooseberries.

Other summer produce on view in the Kitchen and Larder includes cucumbers, cabbage, melons, artichokes, figs, and peaches. Some of these fruits and vegetables went fresh to the table, but a portion of the season’s yield would be pickled for winter.