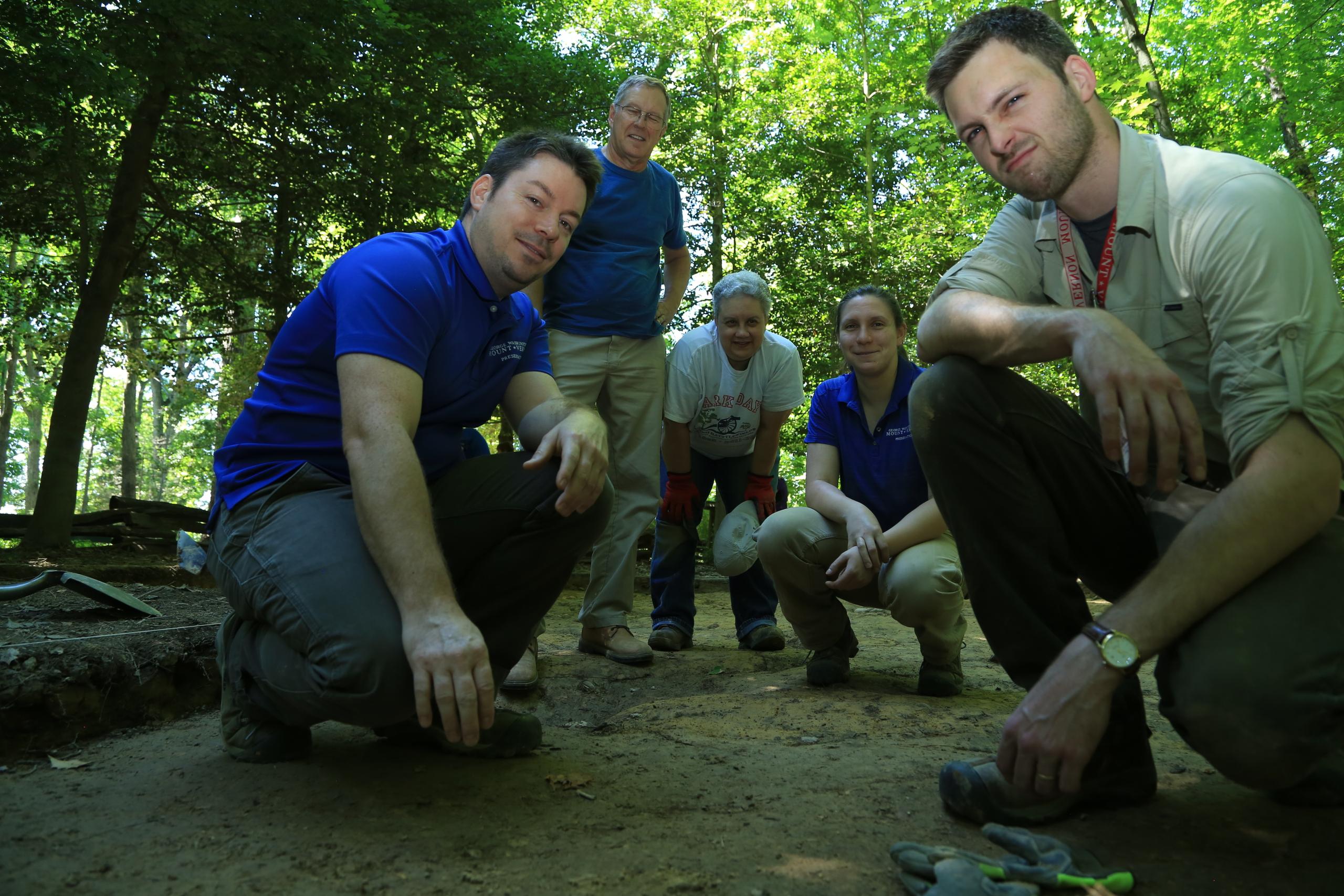 As archaeologists we use diverse bits of evidence to learn more about how people have shaped the landscape of Mount Vernon over time, and in turn how the landscape has shaped the interactions of people with each other throughout the past. This evidence is incredibly diverse in form and age. Everything from a building foundation to a small seed bead used to adorn a dress, a several thousand-year-old stone tool to coins dropped by a tourist twenty years ago, can be encountered by our staff on a daily basis. But large or small, ancient or new, each piece of evidence is valuable as a window into a moment in time.

Every year our staff works on multiple projects where we use physical evidence unearthed from the ground to learn more about how the estate has changed over the course of its long history. The first few months of 2018 saw one of our most exciting projects related to the main house in several decades, as our archaeological team undertook excavations in the Mansion basement. Beneath the brick paving in the cellar, our archaeologists found evidence of the evolution of the house during its ownership by the Washingtons. These excavations revealed a series of drains and wall foundations each built at different periods of the basement expansion. By carefully uncovering the relationships between each of these drains and foundations, our team contributed to a more detailed and accurate understanding of when and how the cellar was created and reshaped by George Washington during his lifetime. Combined with a detailed structural analysis by our architectural colleagues, this information ultimately will help guide on going preservation efforts related to the Mansion through the coming year. 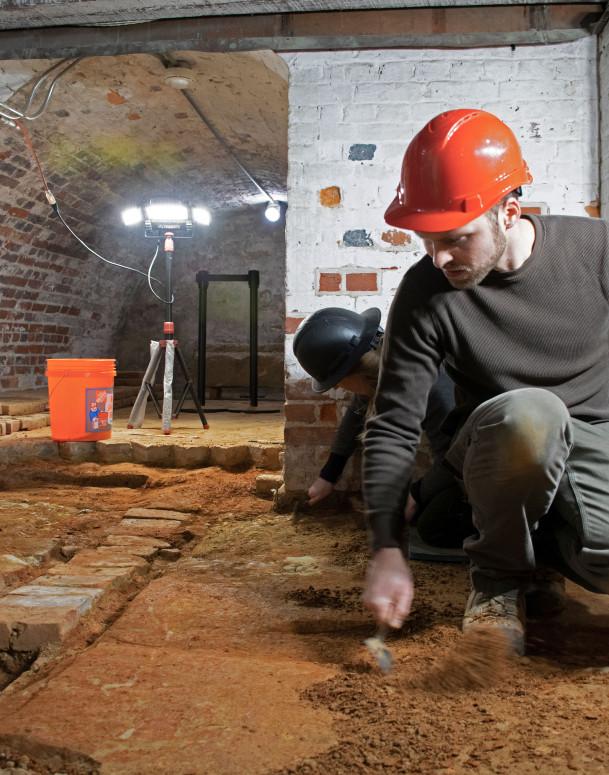 In 2019, our staff will continue excavations in the vicinity of the Mansion and outbuildings in preparation for infrastructure improvements. In a major upcoming project, our archaeologists will be exploring the east lawn. This work will be in conjunction with efforts to restore the ha-ha wall, which was damaged in 2017. It will also entail an opportunity for our archaeologists to explore whether evidence for a “necessary” or privy structure, likely torn down in 1796, remains intact beneath the east lawn. This project will enable the department to continue to learn more about the historic landscape at Mount Vernon.

Likewise, excavations behind the kitchen prompted by infrastructure needs have revealed a series of archaeological features associated with the use of this space throughout the eighteenth and nineteenth centuries. Our archaeological team has uncovered numerous trash pits, drainage ditches, planting holes, and even an undocumented building. Additionally, our analysis of the artifacts we’ve recovered from this space demonstrates numerous items such as milkpans, porcelain plates, wine glasses, and even wig curlers found in the current excavation are similar if not the same as items previously excavated from the South Grove Midden. The Midden was the main trash pit for the kitchen and Mansion during the George and Martha Washington period.

[See examples of the material recovered from the midden.]

Together these discoveries suggest this space was a workyard for the kitchen. As opposed to the manicured lawn we see now, this space would have been a hive of, likely quite messy, cooking and cleaning activities for much of George Washington’s time at Mount Vernon. Moreover, it was enslaved African Americans who primarily would have performed these activities in service to the residents and guests of the Mansion. Therefore, our team will continue to contribute to our understanding of the daily experience of labor and enslavement of African Americans throughout the eighteenth and nineteenth centuries through our ongoing analysis of these materials in 2019. 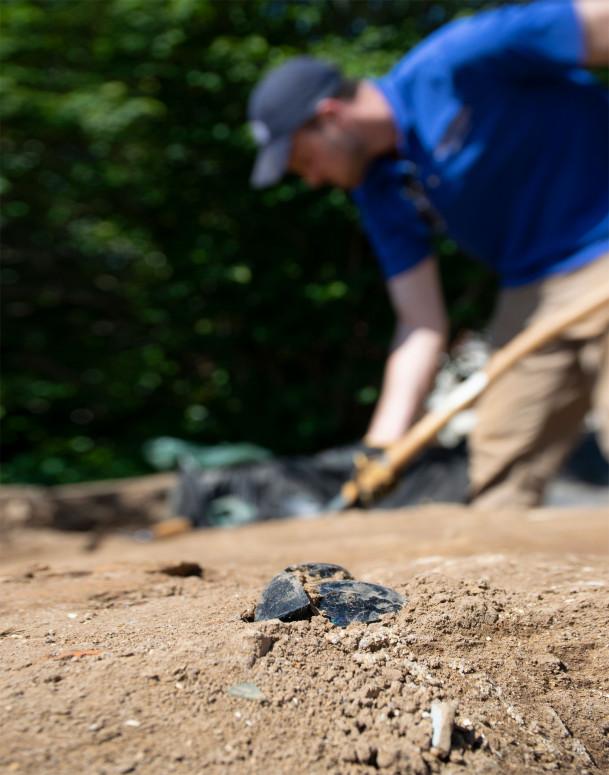 Indeed, throughout the past year archaeological excavations in the African American Cemetery continued to illustrate the key contributions of diverse communities to the long history of Mount Vernon. Oral history suggests this site was the final resting place for enslaved individuals who were held in bondage at Mount Vernon, and possibly some of their freed descendants, during the 18th and 19th centuries. Since consulting with stakeholders in 2014, Mount Vernon’s archaeology team has conducted excavations to document the extent of the cemetery. The goal of this project is to ensure the site will not be disturbed in the future and to facilitate its preservation. Therefore, the effort is limited to the identification of the location of graves and does not include excavating those burials or disturbing human remains. Our archaeologists and volunteers have identified 79 graves of children and adults as of the end the 2018 field season. The legacy of these individuals is remembered through both daily wreath laying ceremonies and an annual event held in concert with Black Women United for Action. 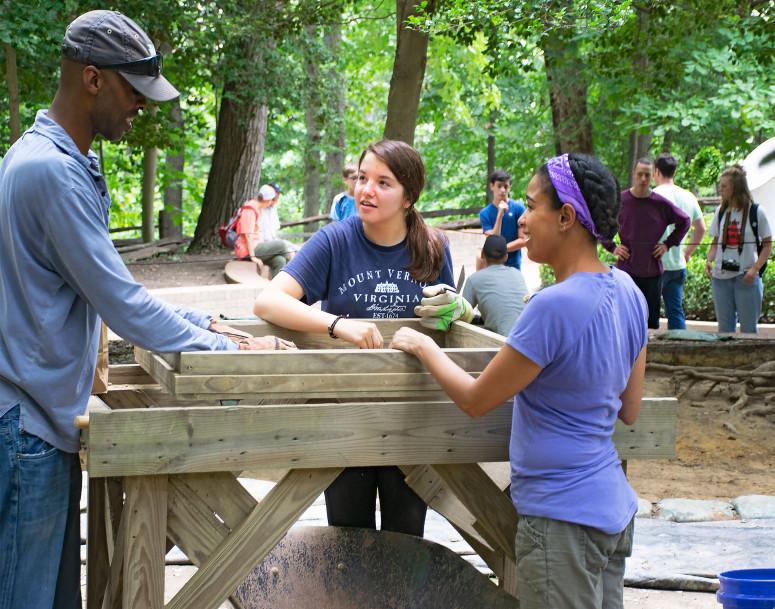 While this site tells a critical story of Mount Vernon’s history as a plantation, our team is also revealing evidence of a long history of human habitation. The ridgeline upon which the cemetery sits was used by communities of Virginia Indians beginning as long ago as the Middle and Late Archaic periods (roughly 6,000-3,200 years ago) and continuing for several thousand years afterwards based upon the archaeological evidence. While the site appears to have been repeatedly occupied over this period, the location was probably one of many temporary stopping over points for communities as they traveled along the river or exploited the resources of the area on a seasonal round.

Mount Vernon as a place has a long history, central to the American story. Within the archaeology program, we hope to use our expertise to reveal the hidden aspects of this history to the visiting public. In 2019, our staff will be continuing our excavations in the South Grove and on the East Lawn and are always happy to discuss our work with visitors. Additionally, staff archaeologists and volunteers will again be conducting excavations in the African American Cemetery beginning in the spring of 2019.