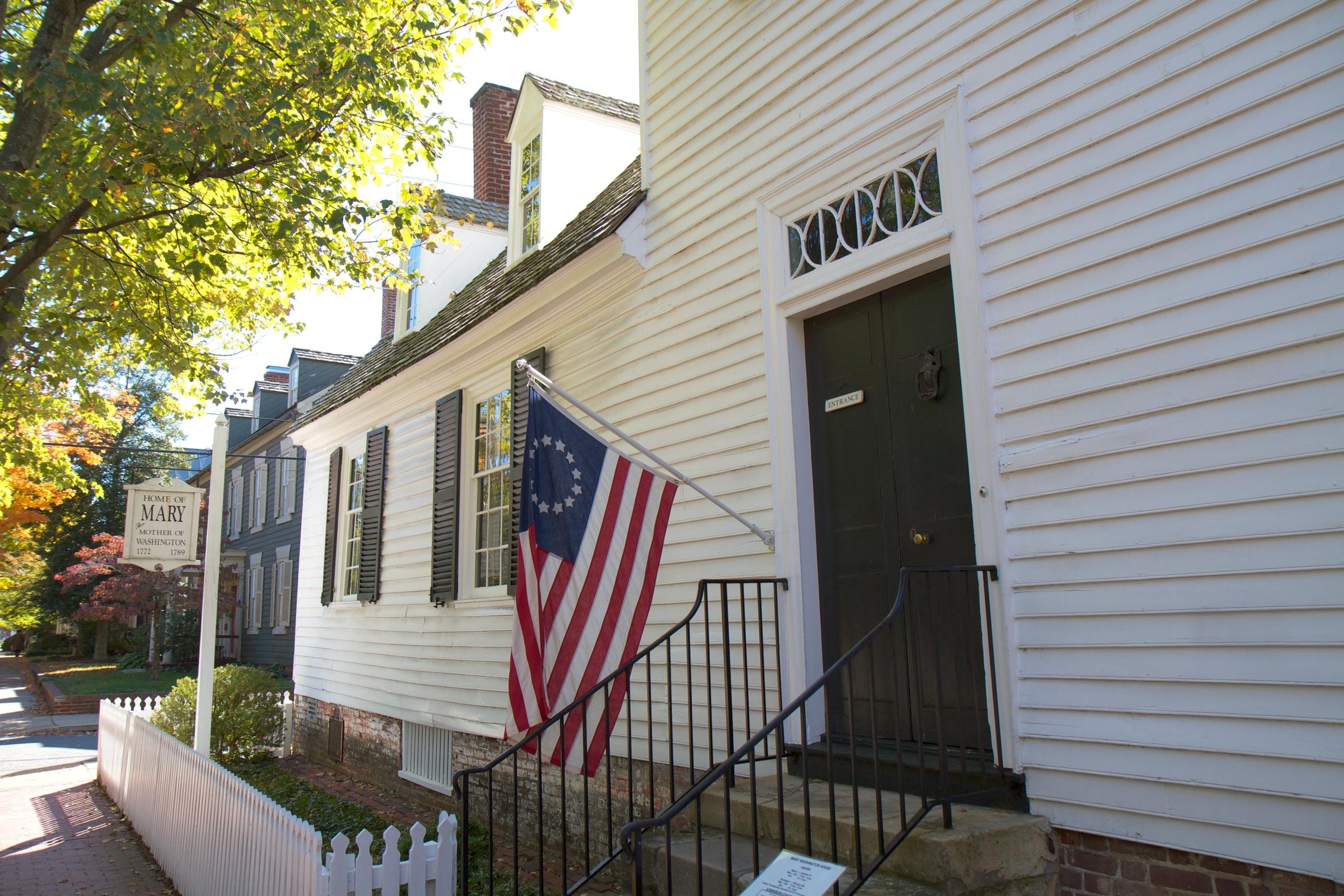 In the spring of 1787, as George Washington was preparing to leave Mount Vernon to attend the Constitutional Convention in Philadelphia, an express rider arrived, carrying an emergency summons to Fredericksburg, Virginia. In telling a friend about his change of plans, Washington noted that “not a moment is to be lost,” because his elderly mother, Mary Ball Washington, and “only Sister,” Betty Washington Lewis, were thought to be “in the agonies of death.”

The previous six months had been a difficult time for him. One of his arms had been in a sling for much of that time, because of arthritis. Someone who saw him about this time reported that his appearance was ”much altered” and that “one arm swung with Rheumatism,” suggesting that he had little control over it. Not even four months earlier, his favorite younger brother, John Augustine Washington (1736-1787) of Bushfield Plantation, described as “the intimate companion of my youth and the most affectionate friend of my ripened age,” had died suddenly at the age of 51.

This latest news prompted Washington to set off almost immediately for Fredericksburg. He arrived there in the early afternoon to find both women doing better than he expected. Betty was thought to be “out of danger.” Their mother, on the other hand, he described as being in an “extreme low State,” which “left little hope of her recovery as she was exceedingly reduced and much debilitated by age and the disorder.” To another friend, Washington confided that Betty’s illness had been brought on by her “watchful attention” to their mother “during her illness.” He felt that Mary could not “long Survive the disorder which has reduced her to a Skeleton, tho’ she is some what [sic] amended.” No one spelled out exactly what this illness was or any of its symptoms, leaving us to wonder if it had any connection to the breast cancer that would eventually take her life.

Two years later, it was clear that Mary Ball Washington was suffering from breast cancer. Not knowing for sure, but harboring a suspicion that he would soon be travelling north for his inauguration as president, Washington made another visit to Fredericksburg, as he described it, “in order probably to discharge the last Act of personal duty, I may, (from her age) ever have it in my power to pay upon my Mother.” Washington would stay with his mother from the evening of Saturday, March 7 until the morning of Monday, March 9,1789.

Early in her experience with breast cancer, Mary might have been treated with home remedies, such as a recipe for “Lumps or Swelling in the Breast,” which was recorded in the manuscript housekeeping book of Martha Washington’s youngest granddaughter, Nelly Custis Lewis (1779-1852). It called for spreading the whites of two raw eggs on a piece of linen and applying it while wet to the problem area. The recipe closed with the reminder that the linen “must be frequently moistened in the egg.”

By the summer of 1789, two Fredericksburg physicians were treating Mrs. Washington. The first, Doctor Elisha Hall (1754-1814), was a first cousin of Doctor Benjamin Rush (1746-1813), a prominent doctor, politician, and civic leader in Philadelphia, who was actually consulted on this particular case. The following letter from Rush to Hall gives a good idea of the treatment options available, as well as Mrs. Washington’s prognosis:

“The respectable age and character of your venerable patient lead me to regret that it is not in my power to suggest a remedy for the cure of the disorder you have described in her breast. I know nothing of the root that you mention is found in Carolina and Georgia, but from a variety of inquiries and experiments I am disposed to believe that there does not exist in the vegetable kingdom an antidote to cancers. All the supposed vegetable remedies I have heard of are compounds of some mineral caustics. The arsenic is the most powerful of any of them. It is the basis of Dr. Martin’s powder. I have used it in many cases with success, but have failed in some. From your account of Mrs. Washington’s breast, I am afraid no great good can be expected from the use of it. Perhaps it may cleanse it and thereby retard its spreading. You may try it, diluted in water. Continue the application of opium and camphor, and wash it frequently with a decoction of red clover. Give anodynes when necessary, and support the system with bark and wine. Under this treatment, she may live comfortably many years and finally die of old age.”

Mary Ball Washington’s second doctor was Charles Mortimer, also of Fredericksburg, who had served at an army hospital in that town during the Revolution. He also served three terms as Fredericksburg’s mayor (1782-83, 1786-87, and 1788-89). Although he was then far away, George Washington knew both doctors. Hall appears to have had dinner at Mount Vernon with one of his brothers on June 11, 1788, while Mortimer had treated Washington’s stepson John Parke Custis (1754-1781) in the summer of 1768, when the teenager became ill while visiting relatives.

A few weeks after Dr. Rush’s communication, Betty Washington Lewis wrote to her brother in New York, to let him know that their mother’s breast “still Continues bad.” Betty expressed pessimism about the outcome of the disease, noting that Mary understood what she was facing and “is Perfectly resign’d.” What their mother really wanted was to get a letter from her son, because, according to Betty, “she will not believe you are well till she has it from under your Hand.” The doctors treating Mrs. Washington were anxious to get a supply of hemlock, which they thought would “be of Service to her Breast,” and were hoping that the President could find some in New York, because “there is none to be got hear [sic].”
On September first, George Washington had dinner with two old friends, Baron Friedrich Wilhelm von Steuben (1730-1794) and General Arthur St. Clair (1737-1818), who was then the governor of the Northwest Territory. Steuben was described that day as “remarkably cheerfull [sic] and facetious,” in addition to being “greatly devoted to the President.” Betty’s son, nephew Robert Lewis (1769-1829), then working as one of his uncle’s secretaries, recorded that “[i]n the midst of our mirth my Uncle received a letter from Col. Ball.” Written from Fredericksburg on August 25, Burgess Ball (1749-1800), the husband of George Washington’s niece, Frances Ann Washington (1763-1815) broke the news that Mary Ball Washington had succumbed to breast cancer that same day at about three o’clock. For fifteen days prior to her death, she was “deprived of her speech,” and for the last five days she had “remain’d in a Sleep.” Ball continued: “She has lived a good Age &, I hope, is gone to a happier place than we live at present in. Mrs[.] Lewis being in much trouble, and all her Sons absent, she requested I wd write to you on the Subject, and, as it may be necessary for you also to be acquainted with the last Will of the Old Lady, I herewith inclose [sic] you a Copy thereof—Mrs[.] Lewis wishes you to communicate your wishes & directions to her as early as convenient….”

Robert Lewis confided to his journal that an “event so long expected could not create so much uneasiness, -- as [in a] person less advanced in life.” He was, however, very concerned about his own mother’s health, writing that “I am solicitous to hear from home, -- my apprehensions for the health of my Mother is [sic] great, knowing how attentive she was always during the indisposition of the Old Lady.”

George Washington wrote his sister Betty on September 13, telling her that Colonel Ball’s letter had been the “first account of my Mother’s death” to reach him (he had since received another letter from Betty’s daughter). He also noted that “previous to both I was prepared for the event by some advices of her illness communicated by your son Robert.” Seeking to comfort Betty, he went on to remind her that:
"Awful, and affecting as the death of a Parent is, there is consolation in knowing that Heaven has spared ours to an age, beyond which few attain, and favored her with the full enjoyment of her mental faculties, and as much bodily strength as usually falls to the lot of four score. Under these considerations and a hope that she is translated to a happier place, it is the duty of her relatives to yield due submission to the decrees of the Creator—When I was last at Fredericksburg, I took a final leave of my Mother, never expecting to see her more."

In October, Betty wrote her brother again to say that “the Docters [sic] bills is more than I expectted [sic]”; Dr. Hall was requesting payment of £45, while Dr. Mortimer was asking for £22.

Upon the death of Washington's mother, black cockades, sword knots, and armbands were acquired from a Mrs. Daubeny for the men in the president's household, including the male servants (both hired and enslaved), and official entertaining was cancelled for the period of one week. In order to comply with a Congressional resolution dating back to 1774, however, Washington did not go into full mourning for his mother. This decision won him praise from the newspapers, which noted that the country had been drifting away from the rather spartan commemorations of death, which had been followed during the war, when Congress had resolved that "on the death of any relation or friend, none of us, or any of our families, will go into any further mourning-dress, than a black crape or ribbon on the arm or hat, for gentlemen, and a black ribbon and necklace for ladies, and we will discontinue the giving of gloves and scarves at funerals." There is some indication, however, that while Washington never went into deep mourning for his mother, he did adhere to custom as he entered the next phase of the outward grieving process. According to Senator William Maclay (1737-1804) of Pennsylvania, when the president came to address both houses of Congress on January 8, 1790, a little over four months after the loss of his mother, he was dressed in “second Mourning."