Excavated from the South Grove, these five objects offer an interesting chance to explore eighteenth century life and how archaeologists attempt to learn more about it through material evidence. In this discussion, I want to walk you through how archaeologists approach interpreting artifacts. Step by step, we explore the form and origins of objects, then we attempt to situate such objects within broader social functions, and finally begin to untangle how those broad social contexts can inform our interpretation of object use in daily life of the communities in the past.

Measuring roughly two inches in length when complete, these artifacts are fragments of wig curlers. The curlers are made from white clay that was rolled to a shape resembling a dumbbell and were often cut at the ends to the appropriate length. Each of our fragment represents roughly half of the complete object, which broke at the narrowest portion of the curler near the middle of its length. Once cut to length, the clay curlers were hardened through firing in a kiln. The similarity of the clay to white ball clay pipes and the ready accessibly of kilns to pipe makers has lead most scholars to associate these objects with that industry. 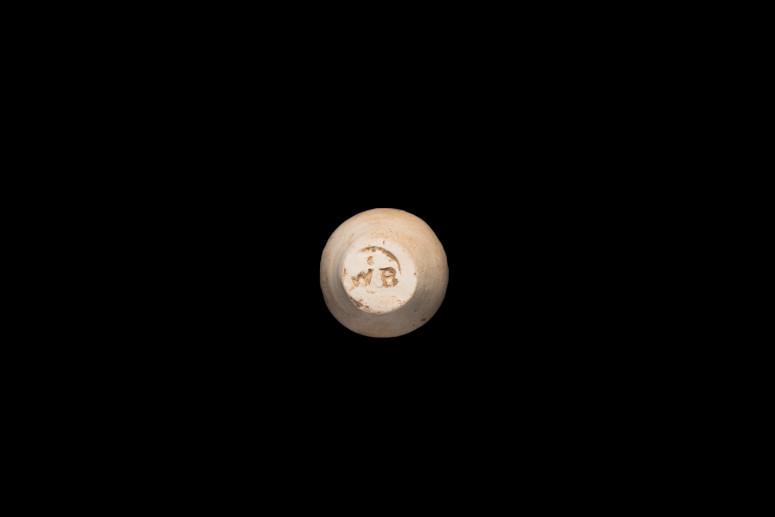 The wig curlers can be seen in the embossed “maker’s mark,” often a set of initials or unique symbol stamped into the soft clay prior to firing in the kiln. Pipe makers used such marks to denote their identity. Indeed, something similar was happening with the marks seen on our curlers. All five of our examples bear a mark (see photo). Four of the objects are marked with a clear “WB”, though there is the variation that two of those have small crowns above the lettering while the others have a simple dot. The fifth curler is clearly marked, but only the second letter, also a “B,” is fully legible. By collating archaeological data from England, we can say with a fair amount of certainty that the “WB” curlers were produced in England, and perhaps more specifically in the London area in the latter half of the eighteenth century. With an understanding of where and when these objects were produced, we can begin to ask questions about how they were used.

Wigs came into fashion in the mid-seventeenth century among the royal court of France, and their popularity spread throughout European society in the following century. Interestingly, while this was not a hard and fast social convention, throughout much of the eighteenth century wigs were most often associated with male fashion. To achieve the intricate and precise curls of the wig, a complex process had to be undertaken to condition raw hair. This was documented by James Stewart in his 1782 text The whole art of hair dressing:

“Hair which does not curl or buckle naturally is brought to it by art, by first boiling and then baking it in the following manner; after having picked and sorted the hair, they roll them up and tie them tight down upon little cylindrical instruments, either of wood or earthenware….in which state they are put into a pot over the fire, there to boil for full three hours; when taken out they let them dry, and when dried they spread them on a sheet of brown paper, cover them with another, and then send them to the pastry-cook, who making a crust or coffin around them, of common paste, sets them in an oven till the crust is about three fourths baked.” 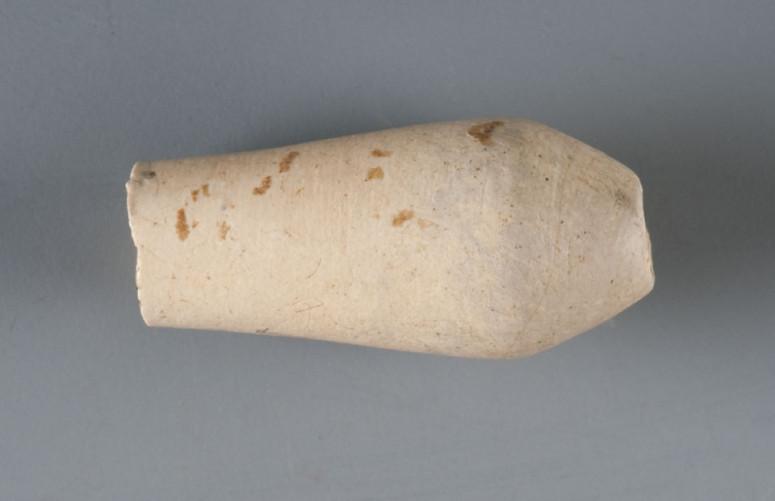 Colonial towns, such as Williamsburg, were the home of professional hair dressers, barbers, and wig makers who likely would have employed processes similar to that described above. A large number of wig curler fragments found at Ferry Farm, George Washington’s boyhood home, suggest such intensive production might also have been conducted at domestic sites which did not have access to professional hair dressers, as well.

What does that tell us about who might have used these curlers at Mount Vernon then?

The presence of two fragments in the South Grove midden, along with other refuse from the main house, suggests wigs were present among individuals at the main house – but whose? Washington himself did not use wigs, instead preferring to dress and powder his natural hair in the style of a wig. The Washingtons' hosted large numbers of guests throughout their time at Mount Vernon, however, and many of these overnight guests were of the gentile class. Given that wigs were a key way for such members of the colonial elite to express their status, we gain insight into one of the ways guests would have presented their conversancy with fashion and appropriate dress for the gentry when visiting Mount Vernon. Additionally, the fact that three of our fragments are from the workyard of the kitchen, suggests wig maintenance, perhaps heating or boiling to refresh curls, might have been occasionally been undertaken by enslaved individuals in that outbuilding. Thus, we can also see how such fashion was dependent, as much of plantation life was at the time, upon the labor of enslaved African Americans.

Mount Vernon’s archaeologists use material evidence to learn more about the eighteenth century here at Mount Vernon. One of our primary sources of evidence is objects, or artifacts, recovered from our excavations on the property. By studying these artifacts closely, we can often gain insights into where and when they were made, and also how they were used in the past. In turn, with this information we can begin to reconstruct the ways objects were used in the everyday lives of the free and enslaved individuals who formed the Mount Vernon community in the past.