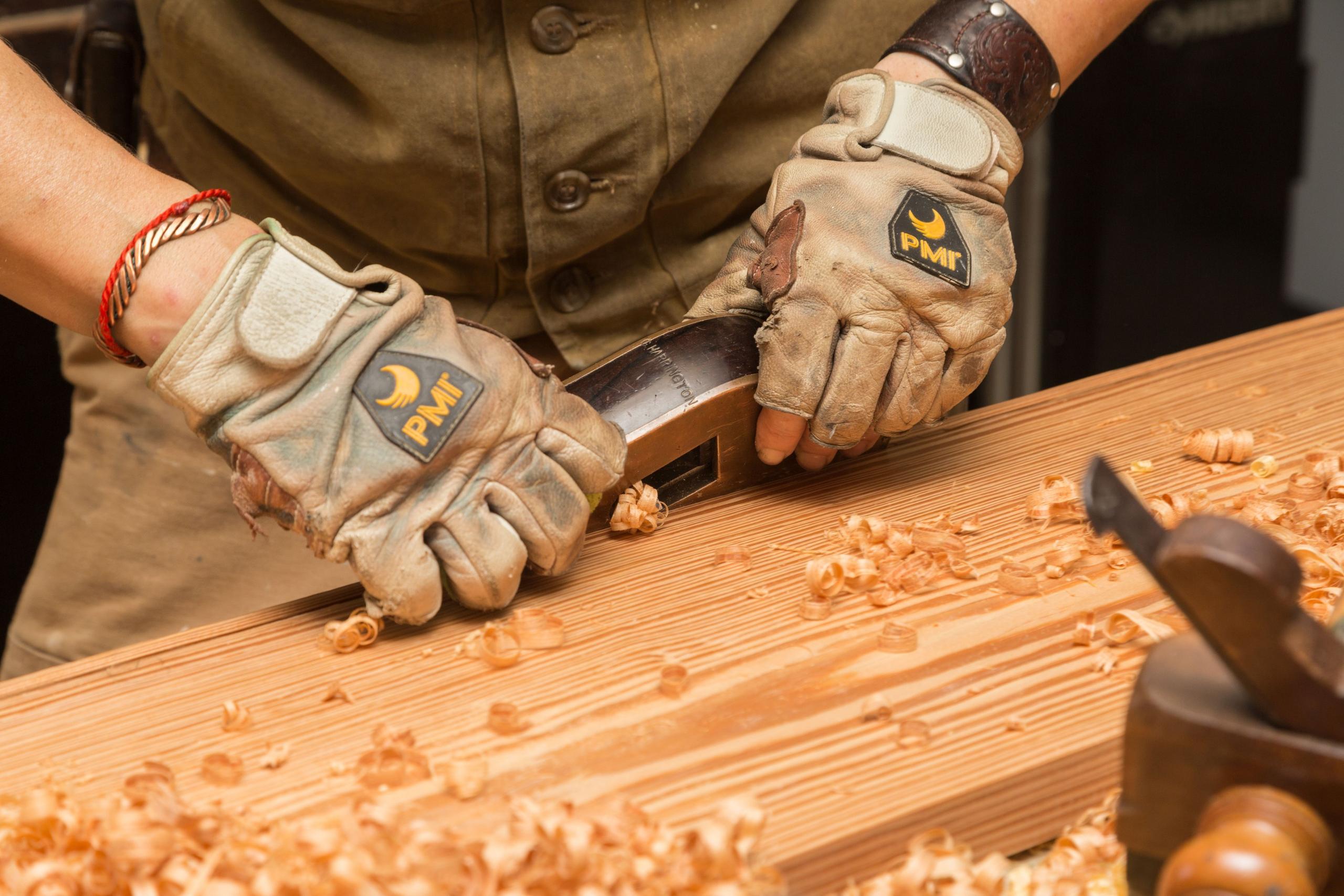 The double doors leading from Mount Vernon’s piazza to the Mansion’s central passage serve as the gatekeepers to George Washington’s beloved home, granting access to Mount Vernon’s visitors and keeping the interior safe from the elements. These overlooked architectural marvels have weathered 63 years of devastating storms and heavy usage. Mount Vernon’s architecture staff monitored their condition and determined the doors required replacement. They hired carpenter Amy Harrington McAuley of Oculus Fine Carpentry to make the new doors using only the hand tools available to an 18th-century craftsman. 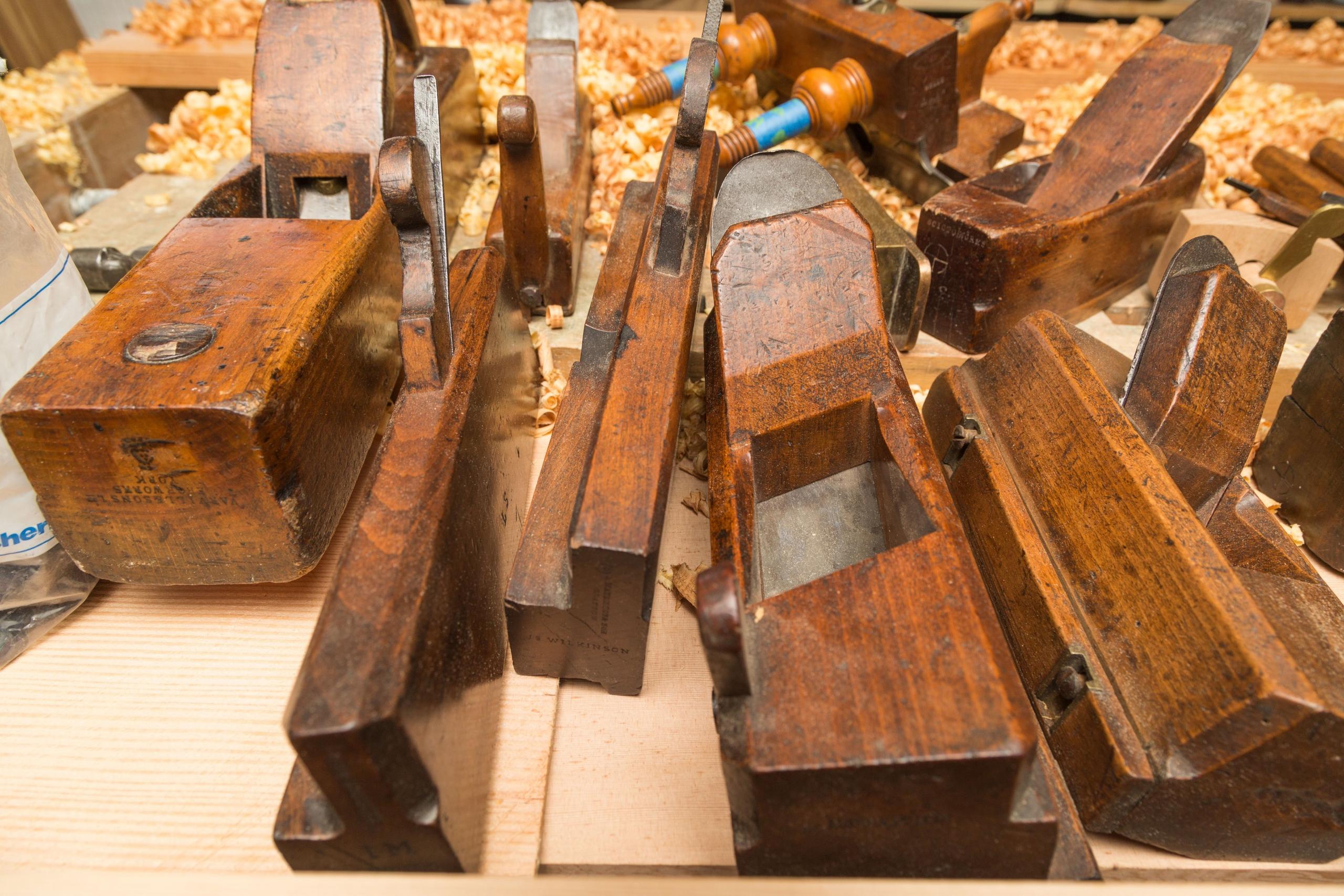 For this project, Mount Vernon’s carpenters, John O’Rourke and Dave Weir, selected large beams of old-growth yellow pine salvaged from a demolished mill. McAuley began by surfacing the lumber with a scrub plane, traversing the plank at a 45-degree angle, then pushing with the grain to smooth the surface. 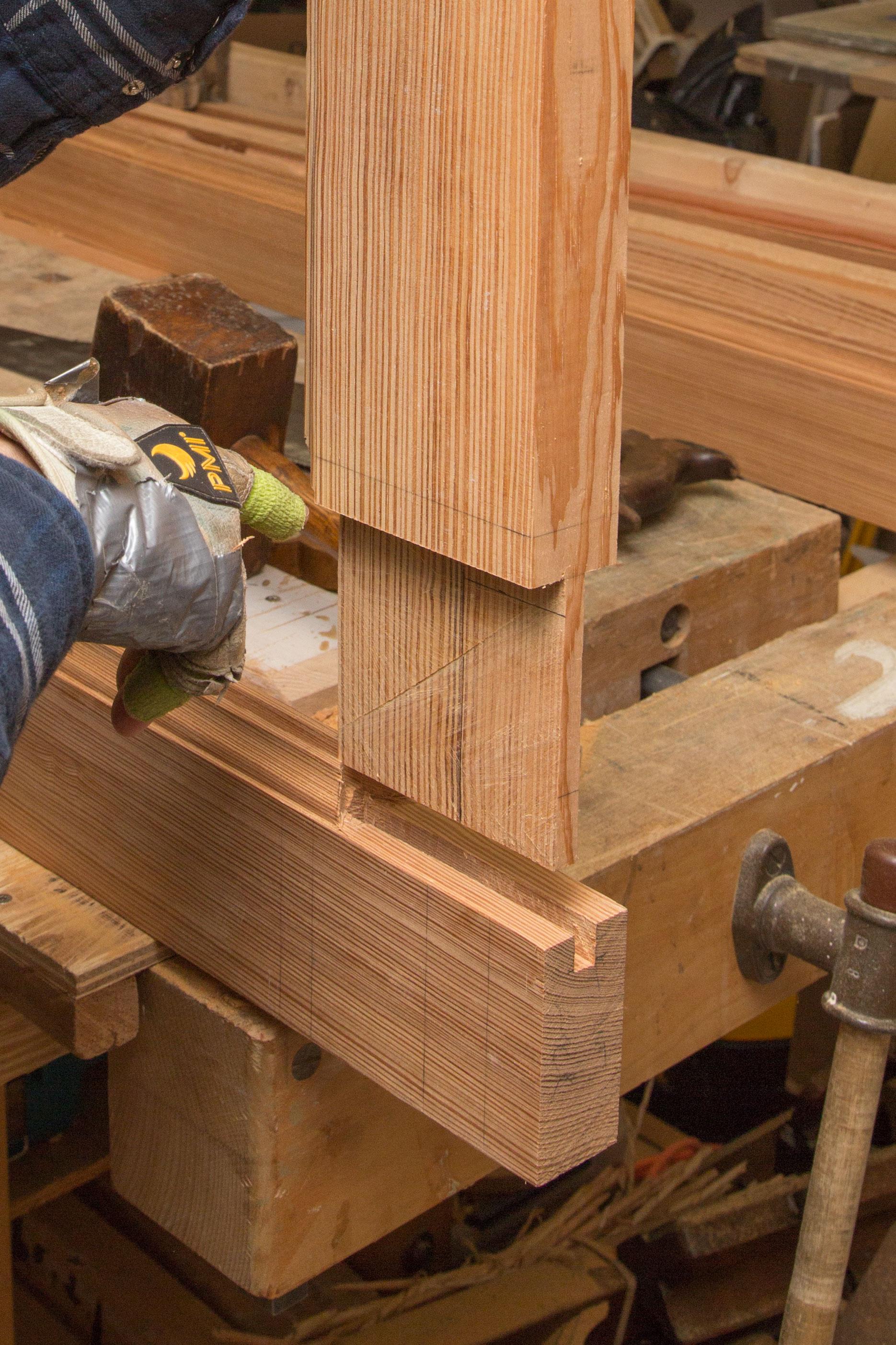 The stiles and rails fit together with 24 mortise and tenon joints: simple mechanisms that require careful planning and execution. McAuley measured the mortise’s rectangular opening and chiseled through the entire vertical stile. She cut the rails’ edges slightly smaller than the mortise to create the tenons. While carving the tenons and mortises, McAuley also sawed a groove along the entire length of the pieces where the panels would sit.

Since McAuley did not have a plane that matched the S-shaped molding, or ogee, adorning the Mansion’s doors, the team was forced to find a creative solution. McAuley first drew the exact molding profile on cardboard, then stenciled the pattern on the rail. She cut two grooves and leveled them off into steps before establishing the curve with a round plane and a convex, or hollow plane. These guideless planes teeter if the carpenter’s hands are shaky, but McAuley’s skill created an identical replica.

The moldings on the edges of the stiles and rails meet in a 90-degree angle. In modern joinery, this corner would be created using a miter joint, where each molding is cut at a 45-degree angle. The original Mansion door did not use miter joints; instead the moldings on the rail were undercut to ride over the moldings on the stiles, an old technique called a scribe joint. Although McAuley knew about scribe joints, she had never made one before. To proceed, she reverse engineered the joint. She and Stuckey documented the joinery used on all of the Mansion’s doors and studied the 18th-century door fragment Litchford found in the architectural study collection to see details of the woodwork inaccessible while the door is intact.

Ultimately, McAuley ventured to North Carolina to consult an expert to learn the precise method to create the complicated joint. First she measured and cut the desired angle through the molding, then she thinned the molding and gouged out a space for the stiles to fit snugly. By the end of the project, she completed this process 60 times and had perfected her method and speed. 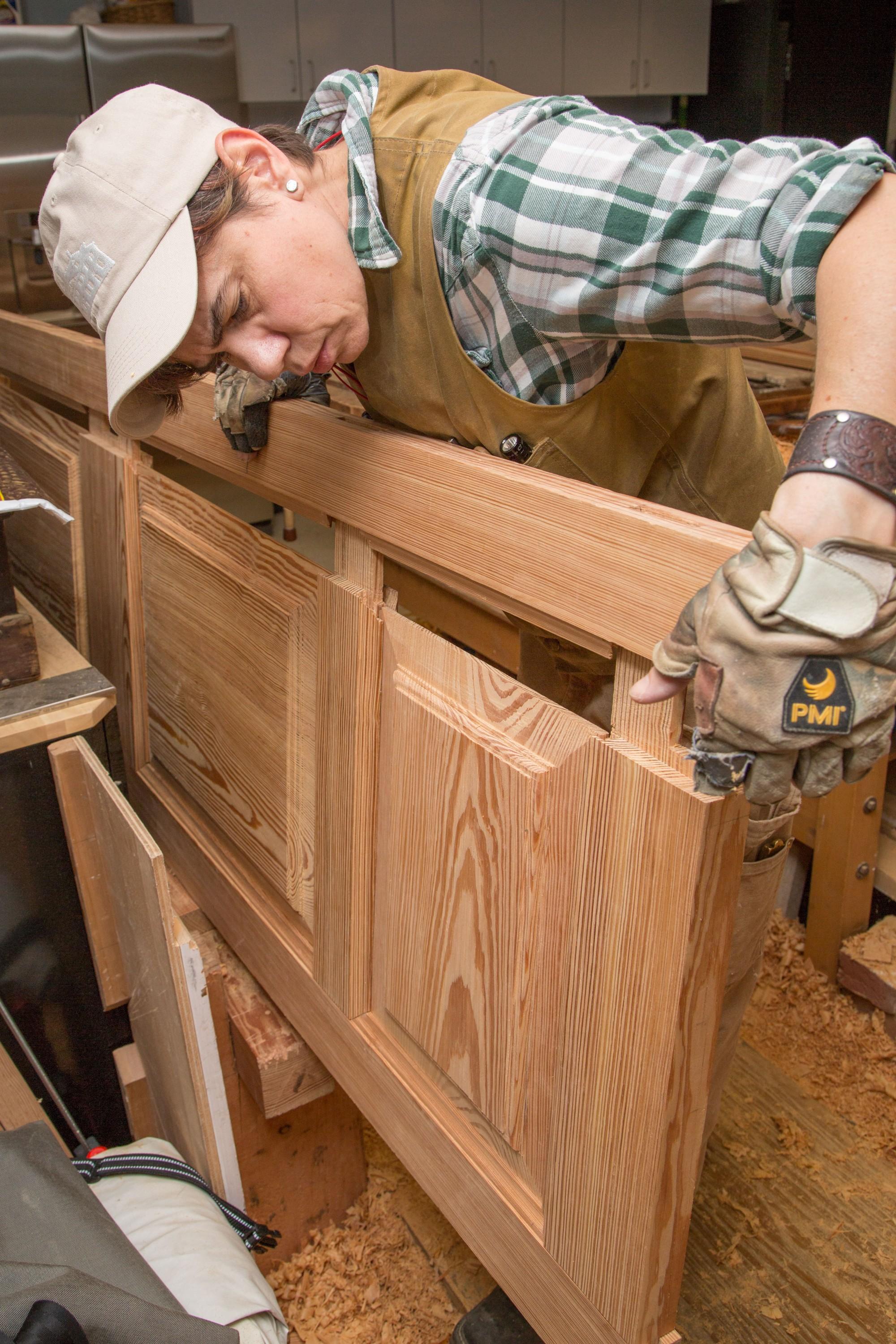 Once the frame was assembled, McAuley turned to the panels. Their large sizes required several boards to be glued together; a single large board would likely warp out of shape. She used planes to create the raised field at the center of the panel and the beveled edges, working the panel on all four sides and moving with and across the grain. Running a plane across the tough grain of the pine was an exhausting task that yielded beautiful results. After ensuring the panels fit, she fastened the frame together, wedging the tenons tightly and locking the joints with wooden pegs.

After approximately 450 hours of work spread across 36 days and consisting of countless miles paced while running hand planes along her workbench, McAuley completed the Mansion doors. McAuley and Mount Vernon’s architecture staff chose the traditional process used by their 18th-century predecessors to create a more authentic product and to open the door for a fading craft to flourish.

Excerpted from "An Architectural Puzzle: Piecing Together 18th-Century Doors" by Kathryn Priebe with Thomas Reinhart. Read the complete piece in the Spring 2018 edition of the Mount Vernon Magazine.

Before the doors can be hung, the Mansion's frame must be stabilized. Through your generosity, these doors will overlook the Potamac River for the next 100 years, granting future generations passage into the home of George Washington.