On March 2, a severe nor’easter brought strong winds to the Mid-Atlantic, relentlessly bombarding power lines and property throughout the region. The estate lost power for more than 36 hours and closed its doors the day of the storm. The wind storm struck down two historic trees on the estate, a circa 1791 Canadian hemlock and a 100-year-old Virginia cedar overlooking Washington’s tomb. 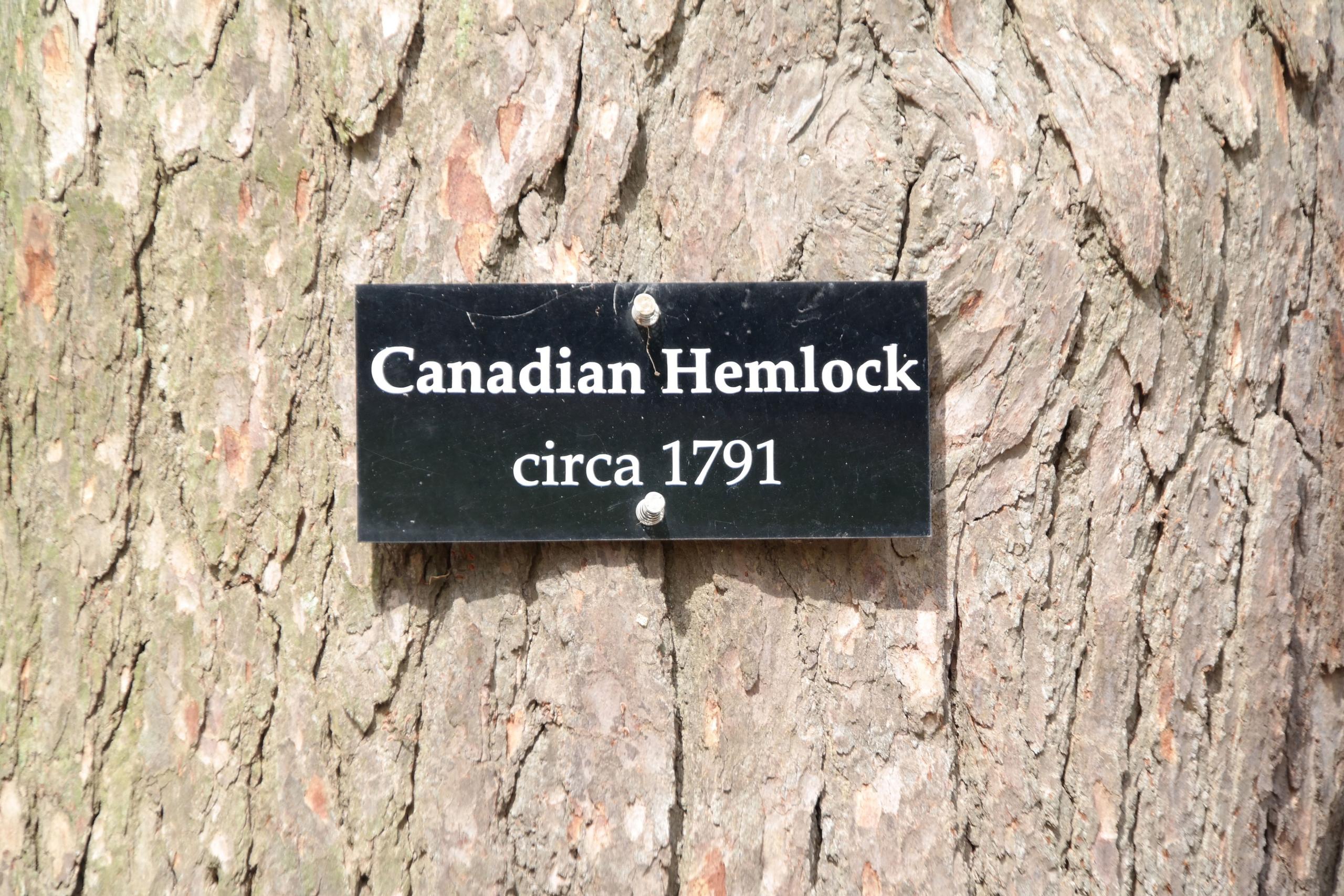 The Canadian hemlock towered over the serpentine path by the upper garden gate and was a living witness to the lives of George and Martha Washington. Washington’s diary indicates he received the hemlock from General Benjamin Lincoln on July 6, 1785, and transplanted the tree from its box to his “Walks by the Garden Gates” a week later.

Since the Mount Vernon Ladies’ Association secured the services of tree expert and head of Harvard’s Arnold Arboretum Charles Sprague Sargent in 1917, Mount Vernon has provided the estate’s trees with top-notch care. The estate’s full-time horticulture experts oversee their care--fertilizing, watering, and pruning the plants when needed. They also monitor the trees for pests and disease to act quickly and remedy the situation, as well as protect the soil near the base of the tree with mulch.

The video above shows a hollow space in the center where the tree had decayed—a common occurrence. Decay occurs when bacteria and fungi enter a wound in the tree’s wood. The tree attempts to compartmentalize the damage by sealing off the damaged cells from the healthy ones, limiting the inevitable decomposition to the damaged cells. The amount of decay or hollowness that will occur in the tree depends on the severity of the wound and the tree's ability to compartmentalize.

A hollow tree does not necessarily mean the tree is weak. Arborists measure the ratio of weak tissue and hollowness to the structurally sound wood to determine the overall integrity of the tree. Additionally, professionals visually inspect the trees to identify new damage to the trunks and branches that could affect its structural soundness. Most importantly, if any part of the tree is determined to be hazardous, it is removed, regardless of the value or historical significance of the tree. 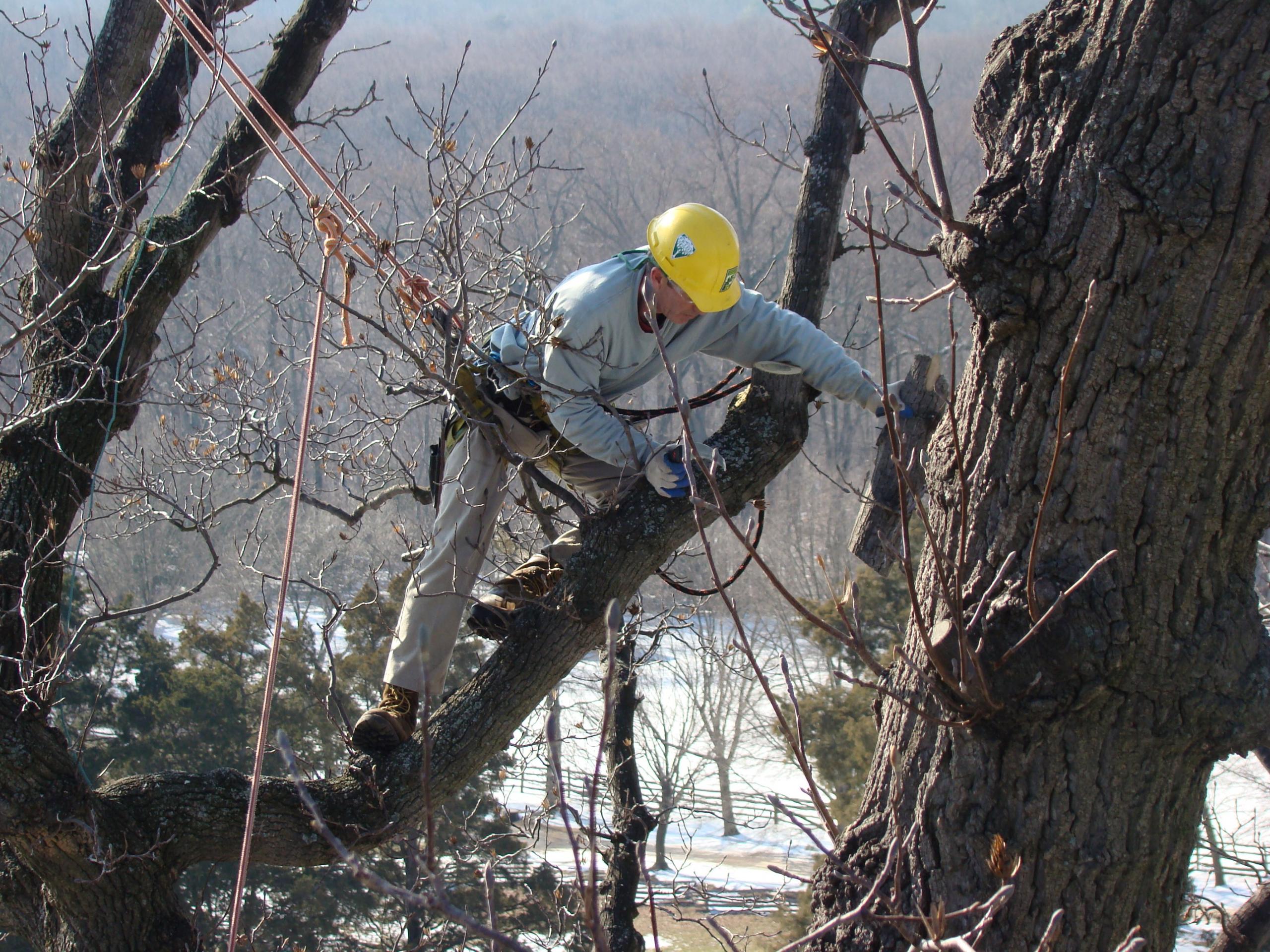 How old was the tree?

The tree’s approximate age of 227 years was determined using dendrochronology: the scientific method of dating trees by counting the ring growth patterns that are formed each year. Dendrochronologists count these rings by extracting a small sample of the tree’s core with a hollow tool called an increment borer. They manually drill a hole into the center of the tree’s trunk, insert a metal slide, and pull out a core sample smaller than a pencil. This process allows scientists to accurately read the tree’s age without damaging it.

These samples offer a wealth of information about the tree beyond its age. The width of these rings fluctuate depending on the year’s climate—wide rings signal a year with good weather. Core samples taken from beams in a building can help determine the date the structure was built. While every tree has a unique ring pattern, dendrochronologists can compare cores from the same species of tree to determine what year and season the tree was cut down to build, in our case, an 18th-century structure. 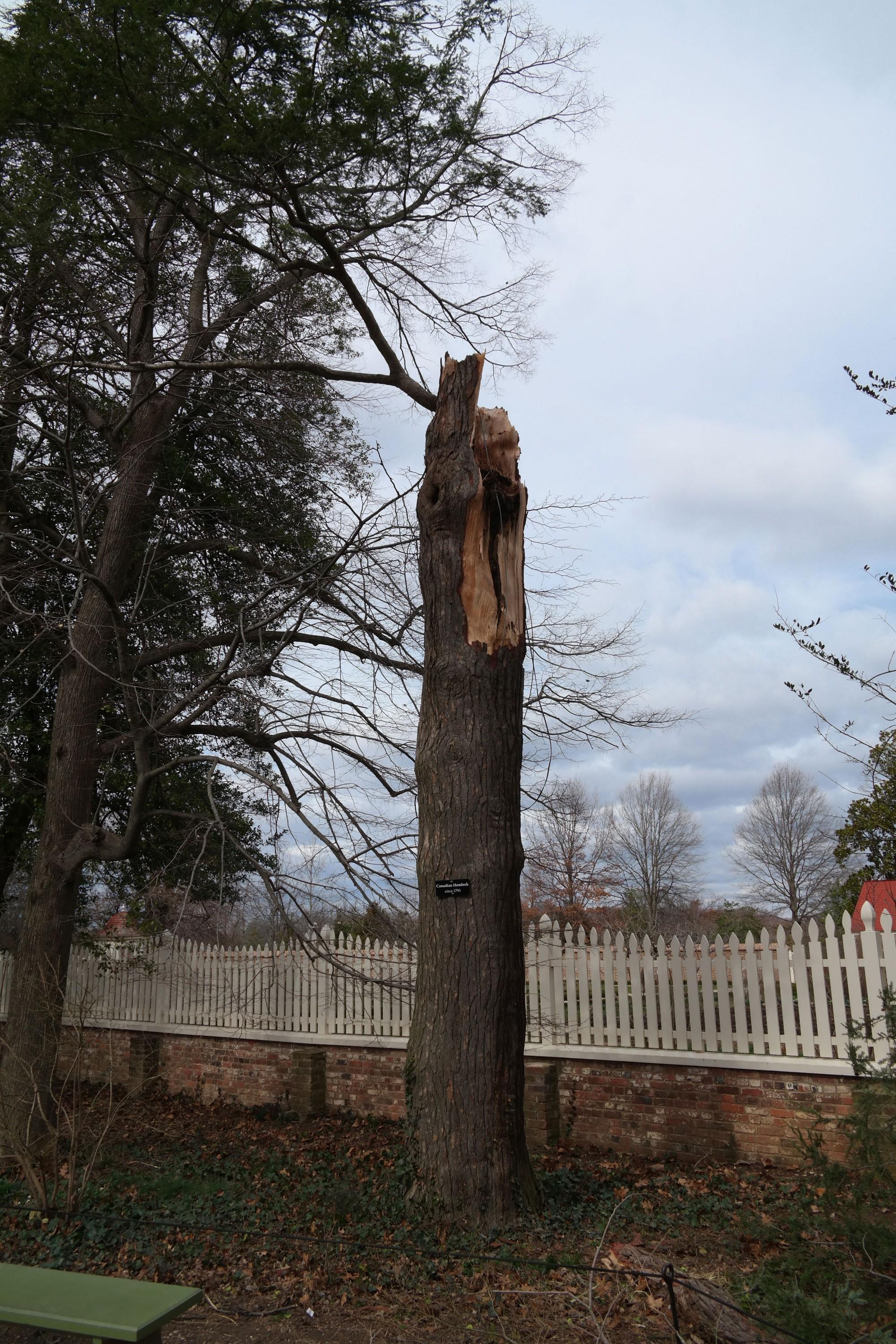 The Canadian hemlock was 30 inches in diameter, and the best core sample available was 11.1 inches in length. Because nearly 4 inches of the core was missing, the dendrochronologists used a mathematical formula to estimate its age. They determined the tree dated to 1791 at the earliest, or 227 years old at most.

If the tree ring dating indicates it was no older than 227 years old, how could this tree be the one Washington referenced in his diary in 1785?

After the storm, Mount Vernon’s director of horticulture Dean Norton found a solid piece of the trunk from about 30 feet off the ground. He cut a slice and counted 213 rings on the sample. After calculating the number of rings absent due to the height compared to the base, he said, “I can confidently say that this tree dates to around the 1782-1783 period."

In order to maintain the landscape’s appearance as it looked in 1799, the horticulture staff will eventually replant a hemlock in the same location. In 2004, the staff tried to clone the original trees on the bowling green, including the hemlock, with no success. They have since tried to propagate the tree by taking cuttings, which also failed. Sprouts grew from seeds collected from the tree, but they did not survive. Seeds and cuttings were taken after the hemlock fell and staff will give it one more try with what remains. If unsuccessful, the team will locate another hemlock for the bowling green.

The wood collected from these historic trees will be used exclusively by the Mount Vernon Ladies’ Association for preservation and special projects. Some items made from previously felled trees are available at the Shops at Mount Vernon.

George Washington oversaw all aspects of the landscape at Mount Vernon.