A Teacher's Perspective: George Washington and the Creation of the Professional American Army

Thirty-nine miles south of Crestview Local Schools (Convoy, Ohio), in the present-day town of Fort Recovery, Ohio, stands a physical reminder of one of the costliest days in the history of the United States Army. The rural agricultural town looks a lot like my community except for the large obelisk-shaped memorial across the street from Fort Recovery High School and the recreated, blockhouse-style fort that stands at the entrance of the town along route OH-49.

Incoming eighth graders often comment that they struggle to see the connection between the American Revolution, the development of the early American republic, and the history of where they’re from: rural western Ohio. The memorial in Fort Recovery and the rebuilt fort structures and local museum serve as great opportunities to talk about an incredible turning point in American history during the Washington administration.

The anecdotal history of Ohio also provides a chance to discuss something of incredible significance to all Americans—the development of the professional, standing army during the Washington administration (1789-1797). By utilizing local resources along with content from Mount Vernon’s collection of Washington materials, I am able to use these moments in Ohio history to elevate my students’ local connection to history and help them realize how closely connected they are to something that was of vital importance to President Washington’s agenda.

I begin by introducing the concept of the fear of a professional, standing army to my students. Most of my middle school students have at least one family member that is currently serving or has served in the military. It baffles most students that a fear of the military might have ever existed, and this typically becomes a point of interest going forward. We study General Washington’s resignation of his military commission to the Continental Congress in 1783, in order to outline Washington’s belief that the civilian government should be responsible for the control and operation of the military, as well as Washington’s example to the country that this new nation would be safeguarded through the involvement of active citizens rather than the mere protection of the sword.

We also examine General Washington’s farewell orders to the army and the farewell reception for his officer corps in New York City at Fraunces Tavern as moments where Washington commanded the attention and respect of his men. As the retiring general prepared to return to his beloved Mount Vernon with his wife, Martha, he departed with a direct challenge and order for his men to become active citizens in their communities. He encouraged them to be more concerned with the future of the United States than with holding a grudge about a lack of pay or quality treatment during the eight-year campaign for independence from Great Britain.

From year to year, my students generally connect with the idea of civil service and sacrifice (they definitely enjoy the parallels between General Washington and Roman general, Cincinnatus) but it can be a stretch for students to completely embrace how and why our young nation chose to continually underequip and ill-compensate our veterans and their families during and following the Revolutionary War. During our discussion of the Newburgh Conspiracy, prior to the ratification of the Treaty of Paris in 1783, my middle school students admire the leadership demonstrated by General Washington to prevent a military coup from marching on the temporary capital in order to hold the Continental Congress hostage in exchange for compensation. These students, at the same time, also strongly sympathize with the soldiers who were willing to fight for the pensions and bonds that they were promised in the service of their country’s founding ideals and values. 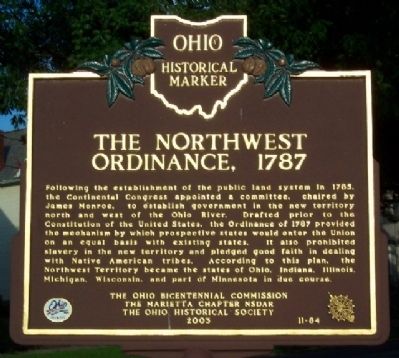 When we transition to discussing the Articles of Confederation that attempted to create Union and foster organization and collaboration among the several States, we examine the inability of the Confederation Congress to adequately sustain a standing army in the field and its continual failure to compensate military veterans and new recruits to the American army. Additionally, the first attempts to expand into the West, in places like the Ohio country, through land ordinances were also convenient methods to encourage the resettlement of cranky war veterans to remote, rural regions far away from the seats of government on the Atlantic coast. Large elements of the remaining army would be offered prime land speculation opportunities in the West as long as they were at the tip of the spear with expeditions to clear land and deal with the Native Americans in the years that followed.

In 1791, an expedition of soldiers, militia, and families set off from protected outposts along the Ohio River in order to create trails and identify waterways that might expedite settlement of the Ohio country. Led by the Governor of the Northwest Territory, General Arthur St. Clair, this body included 1200 soldiers from the US Army—nearly the entire organized force in the country—many of whom were veterans of the American Revolution. Along the banks of the Wabash River, the American encampment was ambushed and overrun in a coordinated attack of confederated Native American warriors. During the fighting, over 900 of the professional soldiers were killed or severely wounded. The casualties also included the men, women, and children that accompanied the expedition. The survivors haphazardly made their way back to the safety of outposts along the Ohio River, and the alarming news of incredible defeat was dispatched to Philadelphia, the Federal Capital.

Following the horrific news of the massacre in the Ohio country, President Washington and his Cabinet motivated members of Congress to abandon previous reservations about an enlarged, professional army in order to rebuild the decimated units that returned from Ohio. Washington used his past experiences as commander-in-chief of the American army and his current leadership as the chief executive in order to grow and develop a legitimate professional army under the leadership of General “Mad” Anthony Wayne. The trust that Congress and the American people had in President Washington allowed today’s modern military to begin real development in the early 1790s. By 1793, General Wayne returned to the Ohio country to “recover” the remains of the Americans that perished at the Battle of the Wabash (St. Clair’s Defeat), as well as to open up settlement of the Northwest Territory. This newly invested military would be utilized to protect settlers, drive out Native American tribes, and establish treaty language with Indian leaders in the region. From this point on, because of the careful management of President Washington, the American army would be used to protect American interests in domestic and foreign matters/policy.

Attending the George Washington Teacher Institute in 2015 was one of the most influential professional learning opportunities that I have had as an American history teacher. On-site immersion and tangible manipulation of key primary resources at Mount Vernon have continued to inspire me to develop and plan better lessons for my students at Crestview Middle School in Convoy, Ohio. I’d like to thank the Mount Vernon Ladies’ Association for continuing to support the legacy and mission of General Washington in our nation’s schools.