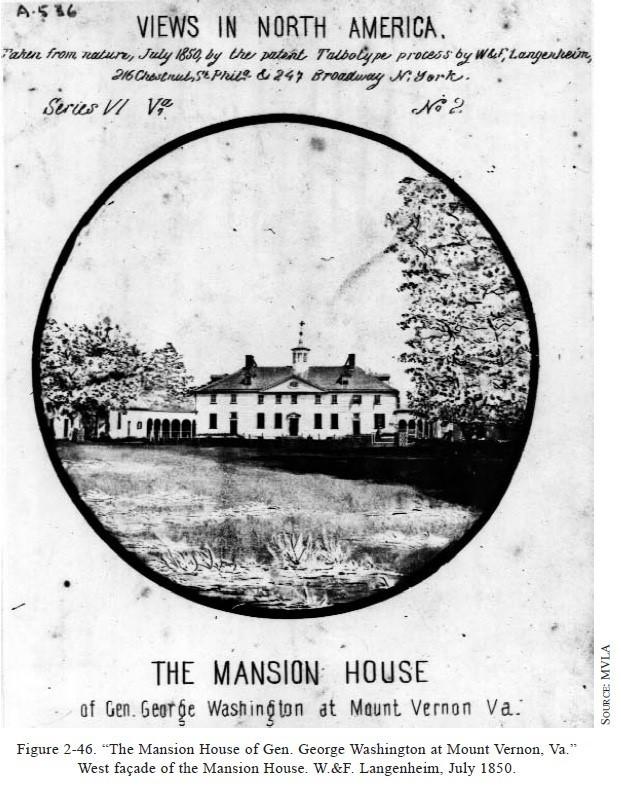 Mount Vernon recently acquired a rare nineteenth-century carte-de-visite for our historic photograph collection. It shows an elderly African-American man sitting in the Washington, DC, studio of photographer Alexander Gardner. The subject is seated in a wooden sidechair, wearing a hat with a worn, round brim, knitted scarf, heavy jacket and vest, trousers, and shoes. There is a serious expression on his deeply-lined face. Beside him to the right is what seems to be a secretary or desk with a glass-fronted bookcase on top, which is partially obscured by a heavy drapery. Leaning against the desk is a tepee-shaped arrangement of straight sticks or canes. On the other side is another piece of paneled case furniture.

While there are many collectors, both institutional and private, who specialize in early photographs of African-Americans, Mount Vernon would not ordinarily bid on a piece like this. The difference in this case was a Mount Vernon connection, documented by a penciled inscription on the back, noting that the photograph was taken on April 15, 1870, and that the sitter was a man named Jim Mitchell, who was 75 years old at the time. This carte-de-visite was our first opportunity to look into the face of this gentleman, who had been enslaved at Mount Vernon by later members of the Washington family, after the deaths of George and Martha Washington. The canes beside him hearkened back to souvenirs—often canes—made from wood taken from trees growing near the Washingtons’ tomb, and sold to tourists throughout the nineteenth century.

Jim Mitchell first appears in the surviving plantation records of John Augustine Washington III, the last private owner of Mount Vernon, as Jim Mitchum. According to four slave lists from the 1840s and 1850s, Mitchell was born in 1795 and was inherited by John Augustine from his father, who died in 1832. He very likely came to Mount Vernon in the 1830s or 1840s with other slaves from Blakeley, another plantation owned by the Washington family. Once here, he labored in the fields. We know from other estate records that he was seriously ill in September of 1844. When 200 acres of the estate were sold to the Mount Vernon Ladies’ Association on the eve of the Civil War, John Augustine Washington still owned over 1,000 adjoining acres, where his slaves continued to live and work. Shortly after the Union Army captured the nearby city of Alexandria, Virginia, Jim Mitchell, then described as 66 years old and valued at $500, was one of 17 slaves, worth more than $16,000, captured by “Federal Hordes” from the 16th New York Regiment, along with several thousand dollars of livestock and farm equipment.

[Mount Vernon during the Civil War]

Following the war, Mitchell came to work as a freeman for the Mount Vernon Ladies’ Association. In these years, he had frequent interaction with visitors, to whom he related stories about having belonged to George Washington (he never did), about having been a teenager when George Washington died (not possible), and of having initially come to Mount Vernon with Bushrod Washington in 1802 (a subject for further research, but probably not true). Historian Scott Casper’s work on the African-American employees of the Association indicates that the stories Jim and others told at Mount Vernon, “recognized and played on visitors’ predispositions, recycling stories from a previous generation of black workers. He adjusted his own life story to provide what each visitor wanted to hear.” Among the visitors he greeted was Charles Douglass, the son of former slave and noted abolitionist, Frederick Douglass, in 1868.

Jim Mitchell was probably the gardener, who, as a fund-raising effort, sold bouquets of flowers from the gardens he tended for the Association. Sarah Tracy, the Association’s representative at Mount Vernon, during the Civil War and for the first years thereafter, noted that the nosegays were sold by “old Jim . . . but he cannot count, so he stands under the window and one of us makes change through the blinds!” He also assisted the founder of the Association in her efforts to restore the original paint colors to the interior rooms of the mansion, telling Ann Pamela Cunningham that the New Room “had always been yellow.”

Like many of the other employees, Jim lived in quarters on the estate with his wife Agnes. He was seriously ill in the summer of 1869, possibly with malaria, since quinine was brought in. He survived that threat and three years later, at the age of 77, he was being paid $6.00 a month “for such small services as he is able to render.”

Research will continue into both this marvelous little photograph and the life of Jim Mitchell, hopefully allowing us to put together an even fuller story of this man, whose history is interwoven with Mount Vernon’s.