The special exhibition Lives Bound Together: Slavery at George Washington’s Mount Vernon opened to the public on October 1, 2016. But visitors might not realize that there is always something new to see: because paper is very light-sensitive, curatorial staff change the documents on display twice a year.

In September, we placed 21 new documents or books in the galleries and flipped the pages of 8 additional letters or volumes. Some of these items are from Mount Vernon’s collection; the rest are loans from other institutions, including the Library of Congress, the National Archives, the Gilder Lehrman Collection, and Fairfax County Circuit Court.

Swapping out documents is necessary for preservation reasons, but it also provides an opportunity us to tell a wider variety of stories. In the latest rotation, we have one particular document that illuminates the lives of George and Lydia, a married couple who were enslaved at Mount Vernon. George was freed on January 1, 1801, by the terms of George Washington’s will. Lydia and their young daughter, also named Lydia, were the property of the Custis estate and remained enslaved.

The document now on display is a receipt, dated January 12, 1803, showing that George was paid $50 for serving as the blacksmith at Mount Vernon for the year 1802. Though small, this slip of paper contains several important clues about George and Lydia’s lives. 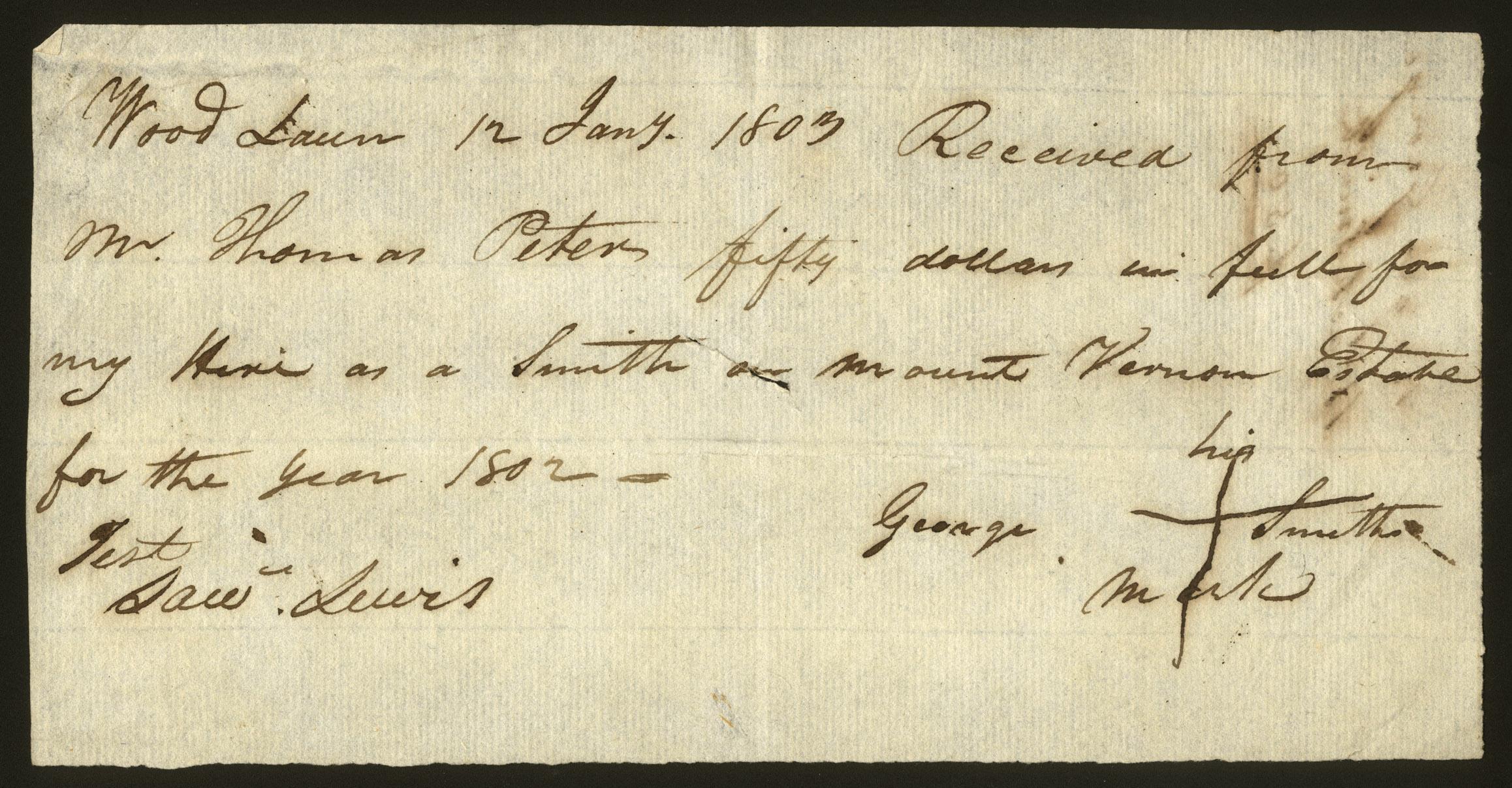 The receipt shows that after being freed, George was hired by Martha Washington to work as Mount Vernon’s blacksmith (he was paid by Thomas Peter, who married Martha’s granddaughter and, as one of George Washington’s executors, helped Martha manage the estate after her husband’s death). Martha was likely familiar with the craftsman’s skill—he had served as one of the plantation’s blacksmiths since at least 1786 (and likely earlier). As a free man, George now received compensation for his labor.

There is another reason George may have remained on the estate, even after he was emancipated and free to go elsewhere: to stay close to his family. Until May of 1802, his wife and daughter were still enslaved at Mount Vernon. After Martha Washington died on May 22 of that year, the two Lydias were inherited by Martha’s youngest granddaughter, Eleanor (Nelly) Parke Custis Lewis, and her husband, Lawrence Lewis. Their plantation, Woodlawn, was just four miles away from the Mount Vernon Mansion. Remaining at Mount Vernon allowed George to stay within a few miles of his family. Indeed, the fact that this receipt was written at Woodlawn by Lawrence Lewis suggests that George spent time there, perhaps even living there with his wife and daughter. 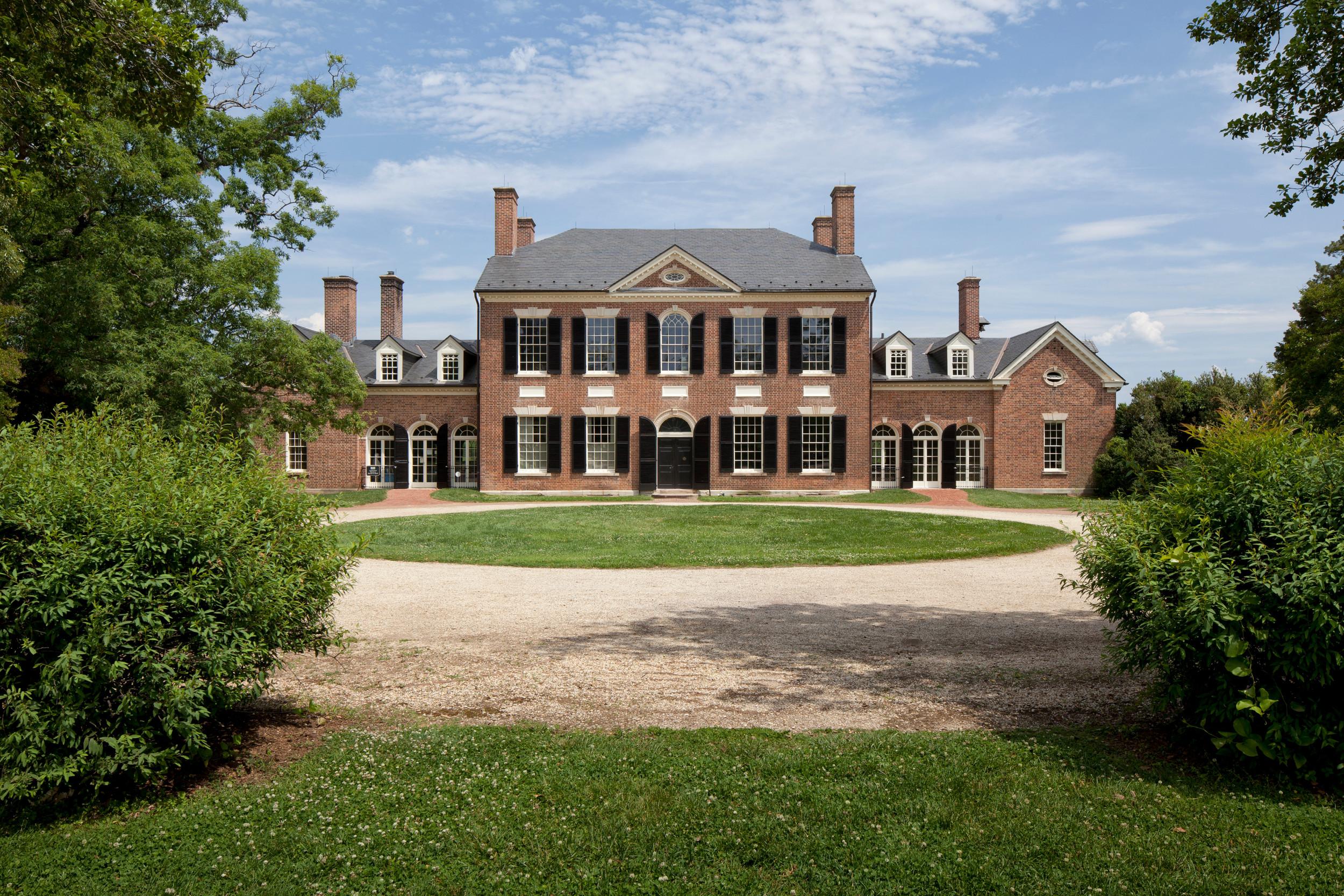 In this document, George signed his name with an “X,” meaning that he could not write and likely could not read (in the 18th century, these skills did not always go together—some people were able to read but not write). Like most enslaved people, George never had the opportunity to receive a formal education. As a result, few documents survive written by the enslaved, so their perspective is often missing from history. To tell their stories, we must read between the lines and look at other forms of evidence, such as archaeology and oral history. Though it is just an “X,” this is one of the only moments when we see something written by someone who was enslaved at Mount Vernon.

Finally, this receipt is also significant because it shows the last name that George selected to use as a free man. Most enslaved people did not have recorded surnames (though many likely used last names privately). For slaveholders, denying the enslaved last names—a key part of family and identity—emphasized that they were “property,” not people. Emancipation allowed free people to legally establish their identity and officially pass down family names from one generation to the next. George chose the name “Smith,” a reference to his trade. In doing so, he followed a trend used in Europe for centuries (common surnames such as Miller, Cooper, Tanner, Mason, Baker, and Taylor all originated from occupations). While some freed people took the names of their former master, very few of those from Mount Vernon adopted the surname “Washington.”

This receipt offers a snapshot of George Smith’s life. Unfortunately, we don’t know what happened to him or his family after this moment. Indeed, the stories of Mount Vernon’s enslaved community are often fragmentary and incomplete, but through documents like this, Lives Bound Together endeavors to piece together as many details as possible.