The cellar played an important role within the Mount Vernon Mansion. 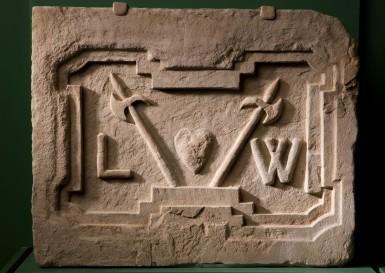 The Mansion was erected and then extensively expanded during several building campaigns undertaken over a period of several decades, from circa 1734 until 1787. The cellar (or basement) is a place where structural evidence for these changes is readily visible. The earliest periods of construction are not well documented, but it appears most likely that the center section of the current house is made up of an early house constructed by Augustine Washington, George Washington’s father, in 1734. This early house appears to have stood on shallow brick foundations.

George Washington began residing at the property in 1754 and during his residence, he twice enlarged the house, first in 1758 when he raised the structure by a full story, and in 1774-76 when he added wings to the north and south ends. As part of the 1758 expansion, he had a full cellar dug out under what is now the central block of the house, reinforced the earlier foundations with sandstone, and added partition walls. When the wings were added, the cellar was extended underneath, and the cellar plan was soon changed to incorporate a passage and storage vaults. As it is currently configured the basement consists of several rooms arranged to the west of a passage that runs approximately three-quarters of the length of the cellar. At the south end of the passage is a single large room that occupies the entire space, with doors separating it from the passage. Three arched vaults lead off of the passage to the east, extending beneath the piazza. 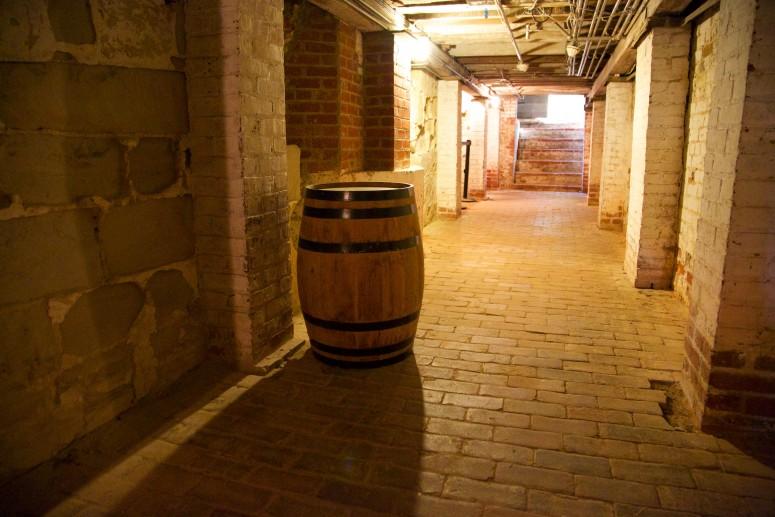 The passage was likely created under George Washington's direction soon after his 1770s building campaign in order to improve circulation within the reconfigured space. This entailed repurposing a portion of the earlier stone reinforcing wall. The stones then were re-laid to form the west wall of the passage, and a stone tablet with the initials “LW” was set in the wall as well. The stone is ornamented with a heart and crossed halberds, and the design resembles a type of 17th-century heraldic imagery. The "LW" is thought to refer to Lawrence Washington, George's grandfather, who inherited the property in the late-1670s. During Virginia’s settlement period, land had to be “seated” in order to maintain ownership, by planting tobacco and erecting a building. The elder Lawrence may have marked such an early house with this stone. In any case, it was George Washington who had the stone set in the wall. In order to preserve the fragile stone, the original tablet was removed and placed in the architecture collection. It has been replaced by an exact copy. 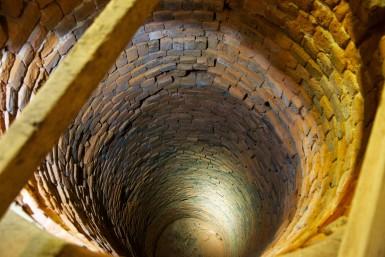 In George Washington’s day, the basement was used for a variety of functions. The large room at the south end of the building was designated as the “Cellar Kitchen” on a plan prepared by George Washington at the time he planned additions to both ends of the building in 1774. This space appears to have been used as a kitchen for the individuals assigned to serve the Washington household. On the plan, three smaller spaces are shown subdividing the room on the west side. These rooms are not extant, but structural evidence indicates that they were constructed, along with a staircase which connected the basement to the lobby adjoining George Washington’s study on the floor above. At least one of the rooms probably served as quarters for an enslaved servant named Frank, who is known to have acted in the capacity of “butler.” A 22-foot-deep brick-lined dry well set into the floor of the north room in the basement was initially intended for the storage of ice but was later used to store pork.

Documentary records, including the inventory of Washington’s estate that was made after his death in December 1799, indicate that a variety of supplies and foodstuffs were stored in the cellar. Wine, whiskey, and brandy were stored in at least one of the vaults, and foods such as turnips, potatoes, butter, beef, and pork were placed in the cellar as well. Even sand for sand-casting the exterior of the Mansion once found a home in the north room.

Explore each of Mount Vernon’s three floors in our Room by Room presentation.

This one-hour walking tour goes behind-the-scenes to areas where "National Treasure 2: Book of Secrets" filming took place, including the Mansion basement, and explores how these locations were used during George Washington's time.