Few of the original furnishings from the Chintz Room survive, but the rich documentary evidence from account books, letters, and probate inventories, combined with the physical evidence from the room enabled curators to select period and reproduction furnishings similar to those that would have been used by George and Martha Washington. 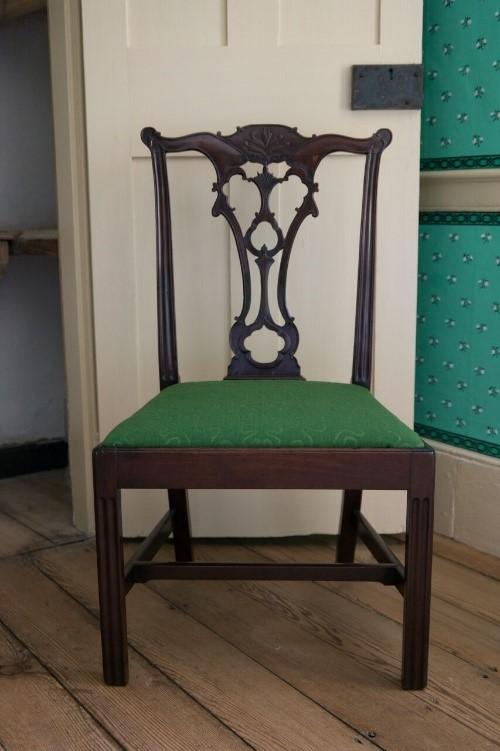 By 1799, the Chintz Room would have taken on a distinctly layered look, indicative of the many changes in fashion, in the house, and in the Washington family over the forty years since the room had first taken shape in 1758.

The oldest furnishings in the room were likely the set of five mahogany chairs that appear on the inventory, valued collectively at $16. A look at Washington’s purchase records suggests the chairs used in the bedchambers in 1799 had initially been purchased to use in the public rooms of the house in the 1750s and 1760s.

As fashions changed and the Washingtons updated the rooms on the first floor, the good quality, but old-fashioned, pieces would have been moved upstairs. Washington acquired a set of English mahogany side chairs with “Gothic” style backs in 1757, and curators represented their use in the Chintz Room with a period set of English chairs. 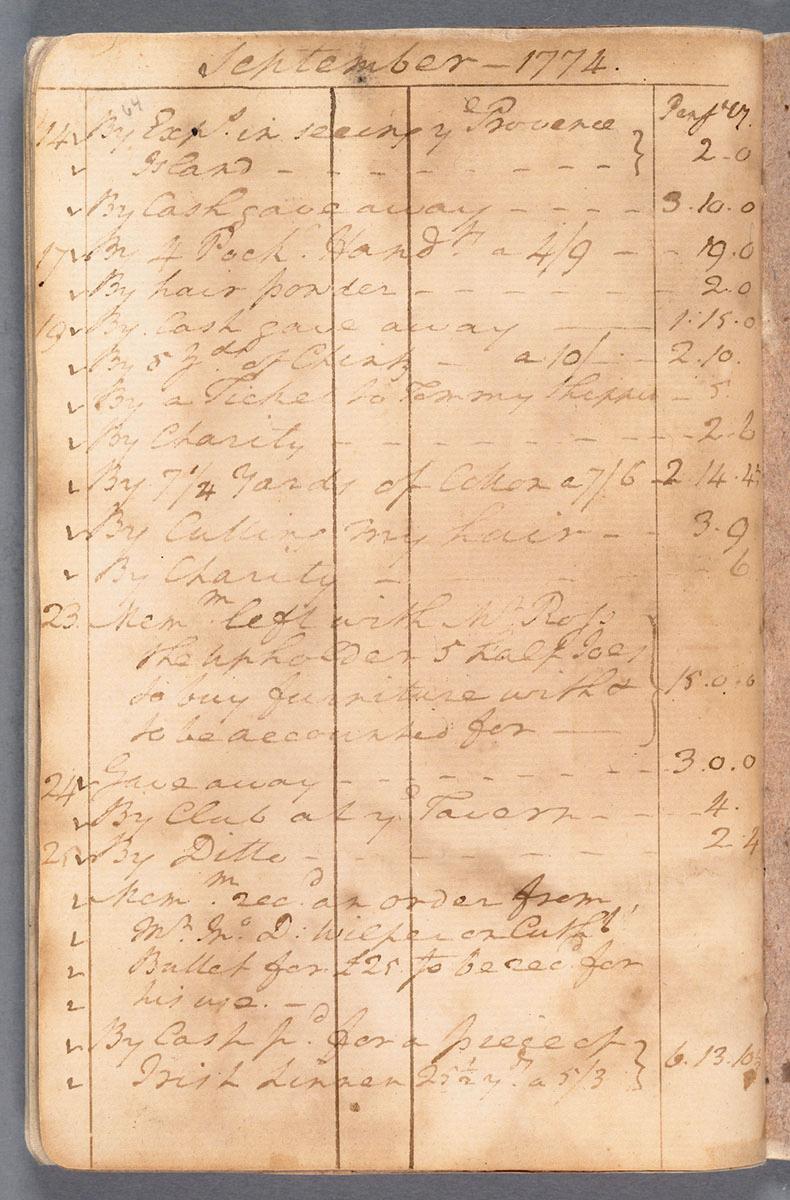 From the Shop of Betsy Ross

Further research revealed that the bedding suite in this room was likely one of the three bedsteads and upholstery sets that Washington purchased in Philadelphia in 1774. For the upholstery, Washington chose to patronize the up-and-coming business of none other than Elizabeth Griscom Ross, better known to history as Betsy Ross. Elizabeth Griscom and John Ross met while working in the upholstery shop of John Webster, and after eloping in November 1773, set up their own shop.

Neither the original bedstead nor bedding from this room survives. In their absence, the curators commissioned reproductions consistent with the 1774 purchase evidence. The reproduction bedstead was based on a surviving Philadelphia example in the collection of Colonial Williamsburg. The form of that bed, from its simple, column-turned footposts to its Marlborough, or squared, legs with cuffs, was one of several options available to customers in the period, as outlined in the 1772 Philadelphia “List of Prices of Cabinet and Chairwork”.

On the reproduction bedstead, the footposts and cornice are of mahogany, but the rest of the frame is tulip poplar stained to match. This was a common cost-saving combination in the period, and was consistent with Washington’s other bedstead purchases: he strategically chose to invest his money where it most mattered, and not to waste it in areas where the material would hardly have been seen.

For the bedhangings, a custom reproduction was commissioned of a historic “chintz” textile found in the collections of Winterthur Museum. The original textile, dating to ca. 1775, is an English print inspired by the bold floral designs of imported Indian cottons. In the period, both English and Indian cottons would have been known as chintzes. The elaborate, double-drapery design of the bed hangings is based on period sources and other known Ross commissions.

Textiles in the Chintz Room

Some of the textiles in the room, such as the window curtains and the slipcovers for the chairs, may also have been renewed at that time. In the current installation, furniture covers and curtains of white-striped dimity, the most fashionable furnishing textile in 1790s America, allude to these changes.

A careful examination of the floorboards indicated that the room would not have had wall-to-wall carpeting in the 18th century.

Washington’s purchase records suggested that the carpets in this room were most likely a pair of relatively narrow runners designed to go on either side of the bed. Manufacturers in Wilton, England, turned out bedside carpets in a variety of patterns during the second-half of the 18th century, from bold floral patterns to imitations of Turkish carpets and Roman mosaic and tile designs.

Washington purchased several of these Wilton bedside carpets over the course of his lifetime, including a few second-hand ones from the 1774 sale of the Fairfax family estate at Belvoir. Close friends of the Washingtons, George William Fairfax and his wife Sally Cary Fairfax were then returning to England.

When the Washingtons returned from the presidency in 1797, they embarked on renovations throughout the house, and updated the rooms with new furnishings acquired in New York and Philadelphia. The five prints in the Chintz Room were among the items Washington brought back.

Artwork in the Chintz Room

There were more personal items in the room as well. In 1799, Nelly Custis Lewis and her first child are believed to have occupied the room, and it would have been outfitted to suit their needs.

Before receiving visitors, Nelly Custis Lewis, assisted by an enslaved attendant, would have prepared for her day at her dressing table. The 1800 inventory listed a pine dressing table in the room, but did not go into detail regarding the personal effects that might have been on it. Using visual and documentary sources, curators recreated a typical dressing table setup. The table is draped with a fine cotton cover and an embroidered veil crowns the dressing glass. A set of reproduction lacquer dressing boxes also stands out on the table. 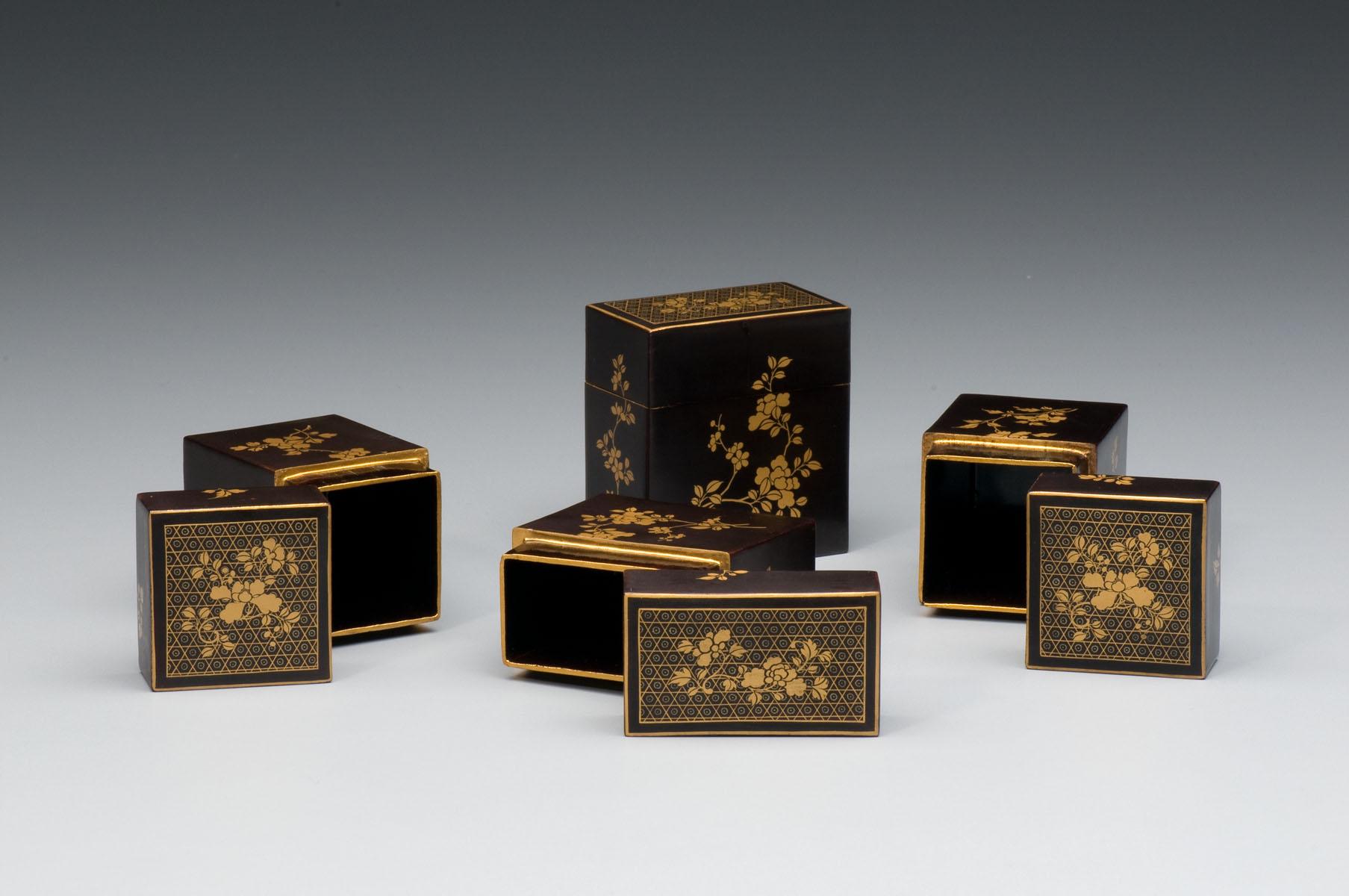 Designed to hold jewelry or other precious personal items, these examples are based on the exquisite Chinese originals which originally belonged to Nelly Custis Lewis. In the 1790s, the dark glossy surfaces and shimmering gilt details of Chinese lacquer made it a highly attractive luxury import.

Also representing the American taste for exotic imports is the original blue and white Chinese porcelain guglet or water bottle, used with a basin to wash hands and face. A remarkable survival, given the delicate form of its fierce dragon-handle, it has a history of descent through Nelly Custis Lewis. 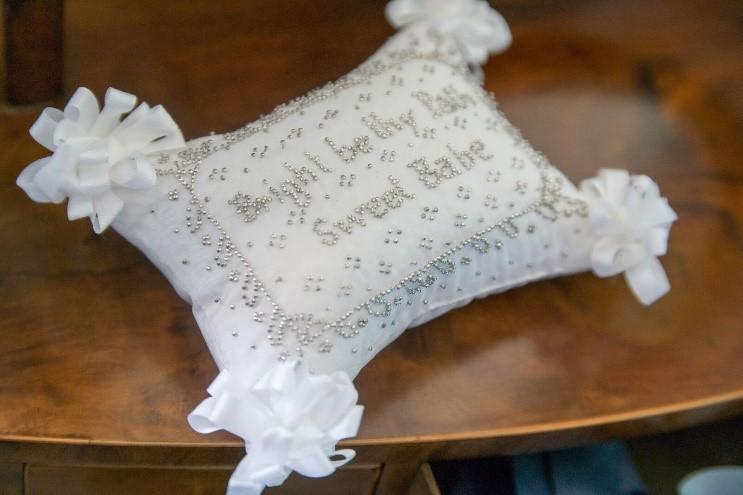 Pins spell out the sentiment “Bright be thy Path Sweet Babe” on the reproduction pincushion. Purchase, 2015 [D-61].

Straight pins were the essential clothing fastener in the 18th century. For a new mother, a common gift was a pincushion with pins used to spell out a sentiment and create a decorative design. The reproduction layette pincushion represents a typical gift for a new mother at the time, and is based on ca. 1790 original in the Colonial Williamsburg collection.

The original crib given by Martha Washington to Nelly Custis Lewis, for the birth of her first child, Frances Parke Lewis, at Mount Vernon. Bequest of Marie Conrad Lehr, 1922 [W-237]. Photograph by Gavin Ashworth.

Standing tall in the center of the room is the original crib given by Martha Washington to Nelly Custis Lewis for the birth of her first child in 1799.

When it was returned to Mount Vernon in 1922, it was missing its tester or canopy top, and the legs and sides had been significantly altered. Its newly restored appearance, with tester, finials, double-drapery dimity curtains, and casters at the feet, is based on a 1794 design by the English furniture firm of Gillow & Co. One side of the crib is hinged, enabling it to fold down and “render it easy to come at the Child or make the Bed,” as Gillow & Co. explained.

Representing the new addition to the Washington and Lewis families is the silver whistle and bells. A traditional gift for an infant, the whistle and bells entertained while the hard coral acted as a teether. Tiny teeth marks on the whistle end indicate this example was actually used by a little one. A similar example descended in the family of Martha Parke Custis Peter, with a history of use by Martha Washington’s great-grandchildren.

With something old and something new, the formal and the personal, the Chintz Room highlights the Washingtons' awareness of contemporary fashion trends as well as the personal touches found in each room when it was in use.