No occupation was more satisfying to George Washington than farming, but no plantation activity was more lucrative than fishing.

In addition to serving as an important transportation route linking Mount Vernon to major ports, the Potomac River also provided Washington with one of his most profitable business enterprises. The bountiful crop of fish harvested from the river each year provided an income that consistently surpassed Washington's earnings from the cultivation of wheat and other food crops on his 8000-acre estate.

In Washington's time, it was natural that he would incorporate fishing into his plantation routine and make it a part of the revenue producing activities of a working farm, following the lead of his father and half-brother Lawrence.

Descriptions of the Potomac's profusion of fish in the 18th century nearly defy belief today. In 1793, George Washington described the Potomac as "well-stocked with various kinds of fish in all Seasons of the year, and in the Spring with Shad, Herring, Bass, Carp, Perch, Sturgeon, etc. in great abundance ...the whole shore, in fact, is one entire fishery.” One could scarcely thrust a spear in the water, reported an observer, without harpooning a fish. During the spring spawning season, according to another account, the constant thrashing of shad and herring made the entire surface of the water a gleaming white.

Learn more about the fish of the Potomac River

Sam Murphy tells us how Washington utilized the Potomac River to create a series of fisheries.

An astute businessman, Washington took full advantage of the river's blessings. Along the estate's 10 miles of shoreline, he maintained three areas for commercial fishing, the largest located about a mile south of the Mansion at Union Farm. One fishery was at Posey's Ferry, called the Fish Landing. A second was in the vicinity of the wharf, and known as the Landing. The third was a mile or so above Sheridan Point, in the River Farm area.

Over the years, many other locations were tried, such as Sheridan's Point itself and a location about one-half mile south of Mount Vernon where the river channel is closer to the Virginia shore. 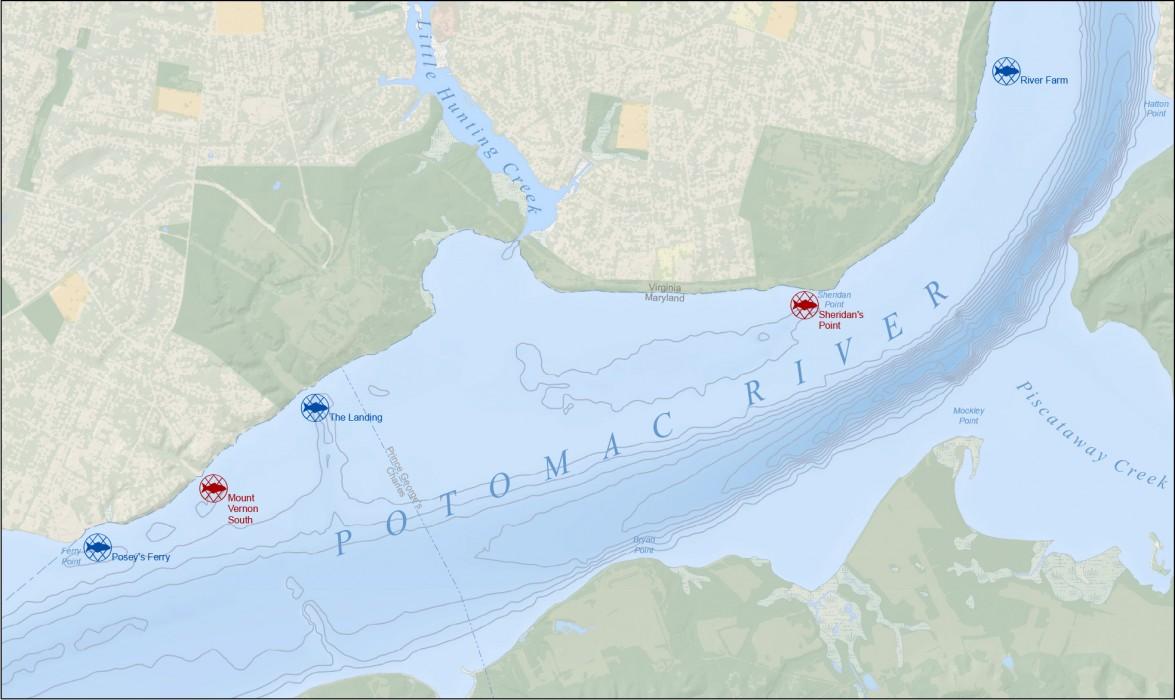 Food and Income for the Estate

The fisheries had a three-fold purpose: supplementing the food supplies of the family, providing variety in the diet of those he enslaved (referred to throughout Washington's diaries as "the people"), and providing an additional source of income when sold to merchants and neighbors.

The most significant problem in this emerging industry was the fact that these huge runs of fish occurred in a very short period of time. This combined with the labor-intensive effort required to clean, preserve, and pack the fish in barrels made the five or six-week fish run a very hectic time. Huge quantities of salt were needed for preserving the herring.

The "Salt House" that still stands along the north service lane near the Mansion held vast quantities of salt for preserving the fish and provided additional storage space for an assortment of fishing equipment.

Sufficient barrels and storage sheds were needed for the processed fish. There was also the effort involved with disposal of the byproducts of cleaning the fish.

Historic Trades Interpreter, Deborah Colburn, shows us how shad was used in a variety of meals at Mount…

In addition to a boat landing, the typical fishery location may also have included buildings for storing boats, nets, and other supplies.

Extensive preparations were made in advance for the brief fishing season, which lasted for only a few weeks in April and May.

As the shad and herring ran with the incoming tides, the enslaved plantation workforce toiled day and night to haul in the bounty. Large seine nets, some as large as 500 feet, were stretched between two boats or from boat to shore to catch the teeming flow of silvery fish, which were salted and immediately packed in barrels. Working in shifts, enslaved fishermen gathered hundreds of thousands of fish, and for their efforts, according to a Mount Vernon account book, were rewarded with a pint of rum a day.

During the brief fishing season, the river yielded an amazing harvest—the typical annual herring catch often exceeded one million, and the shad numbered in the tens of thousands.

The bounty was put to good use on the thriving plantation. All year long, a variety of tempting fish entrees graced Mount Vernon's overflowing dinner table. The fish also formed a part of the diet of the enslaved workforce, each individual being provided with 20 fish per month. The first priority during the fishing season was to layaway enough fish to meet this requirement.

Ever the agriculturist, Washington even experimented with a fish-based fertilizer to enrich the soil on his farms.

But far greater quantities of fish found their way into the hands of merchants from Philadelphia to the West Indies. Barrels of herring with the Washington name developed a reputation for quality that could command premium prices on the international market. Washington once proudly reported that Mount Vernon fish sold in Jamaica for twice the amount received by other Potomac River fisheries.

It is interesting to look at the financial benefit represented by the fisheries. Washington needed about 375 pounds sterling income to "break even" on the operation of the five farms at Mount Vernon and his buildings elsewhere. He continually strove to make the farming operations self-sustaining, able to cover his needs and those of his people. Given the state of the art in farming at that time, with limited knowledge of crop management, soil replenishment, unpredictable weather and crop disease, profit or break-even was seldom possible. Washington was a very progressive farmer, far ahead of his time with a developing understanding of crop rotation and even the elements of fertilization.

Against these difficulties, the fisheries provided a backup. Not only did they serve as a rich source of food, they represented the difference between break-even and financial disaster. In good years, the fisheries were able to contribute 200 to 250 pounds sterling as well as a commodity that could be used for barter and trade.

While Washington was operating his farms and fisheries and involving himself in the political issues of the day, he was also very much a part of the effort to clear and make navigable the river Potomac.

This was to be a major effort on his part throughout his life, the locks at Great Fails and the canal being a part of his dream of opening a route to the headwaters of the Potomac and a way to connect into the Ohio River to open up the wilderness to settlement and trade.

LEARN MORE ABOUT THE POTOMAC COMPANY

Over the years, the river that Washington loved amply rewarded him by sharing its abundant riches.

With the fruitful fisheries that lined its shore and the bevy of boats that sailed its waters, the Potomac River emerged as a vital component of Washington’s extensive plantation operations. Today, the flowing waters continue to provide a timeless reminder of George Washington's beneficial relationship with one of the country's greatest rivers.