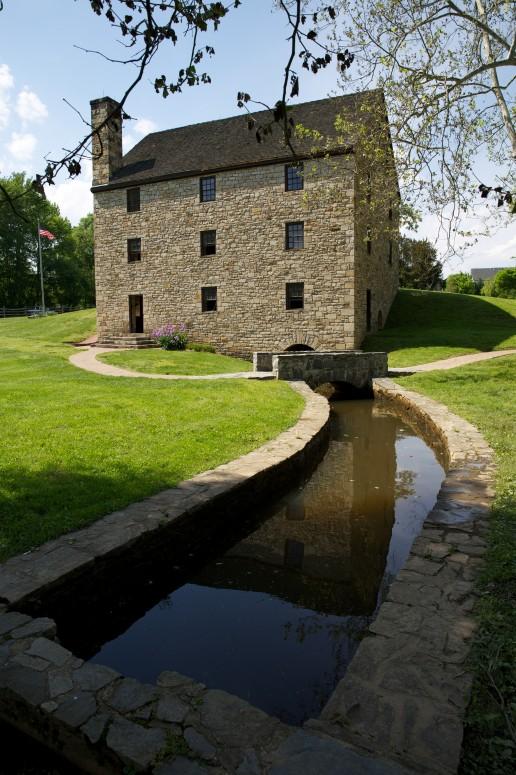 Augustine Washington, George Washington’s father, likely had an operating mill on his plantation (the future Mount Vernon) as early as the 1730s, but by the 1760s this dilapidated mill was in great need of a replacement. By 1769, George Washington had decided to create a new mill that would be located along Dogue Run, about a half-mile away from the old mill. Lumber for the mill was harvested from Washington’s Mount Vernon lands, while the large river rocks used for the foundation were floated down the Potomac from sources near the falls of the Potomac, and smaller stones used for the walls were quarried locally.

Washington's resolve to improve and expand his gristmill enterprise marked a significant turning point in the management of his plantation. During the 1760s Washington moved away from tobacco cultivation and had his enslaved workers plant more grains, primarily wheat and corn. This transition gave Washington a dependable cash crop that was not dependent upon markets in England. With an expanded and more efficient gristmill, Washington could turn his crops into flour and cornmeal. The gristmill could also bring in revenue by charging neighboring farmers a fee to grind their grain.

According to an 1803 insurance document, Washington’s gristmill was 32 feet by 46 feet. In 1783, Washington described the mill in one of his letters, “two pair of Stones, one pair of which are French-burr, employed in the merchant business. The Mill house is of Stone, large and commodious, the dwelling house, which is convenient, is within 30 yards of it; and has a garden enclosed adjoining. A Cooper’s Shop is also near, and the whole convenient to tide water.”

2. Washington's mill utilized a 16' pitch back waterwheel that was placed inside the mill's walls.

Many who view Washington’s gristmill from the outside may not immediately recognize the tall stone building as a mill. Washington decided to place his large, 16’ diameter wooden wheel inside the mill’s walls where it would be more protected from the elements.

Of the four prevalent varieties of water wheels – overshot, pitch back, breast, and underwheel, the millwright, John Ball, recommended that Washington employ a pitch back wheel. With a pitch back wheel, water drops out of the bottom of the flume and hits the water wheel at the 10 o’clock position rotating it counter clockwise. On the wheel are 40 buckets, each of which, when full, would weight around 160 pounds. Pitch back wheels, since they took full advantage of gravity, were considered to be one of the most efficient wheel types.

The 16’ wheel was connected to a series of gears that stepped up the speed of the machinery and powered the large millstones that produced the finely ground flour and meal. 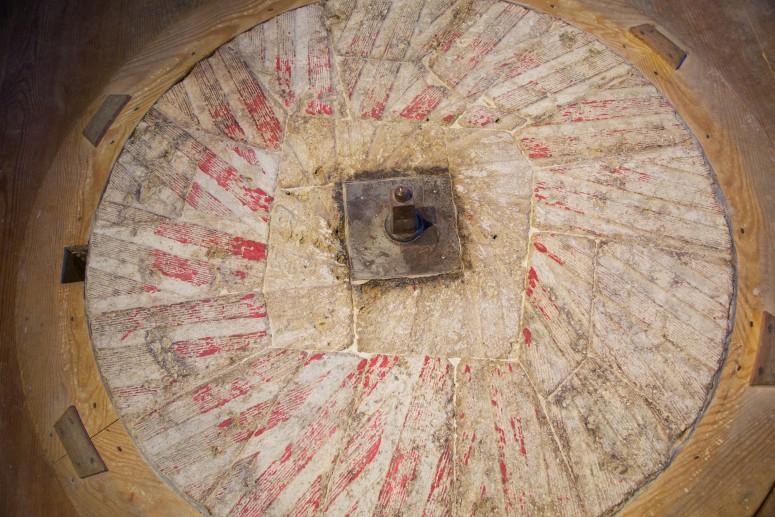 Washington fit his mill with two sets of millstones, one set of French imported burrstones were used to grind wheat for the export market, the other set, which may have been German imports known as ‘cullin’ stones, from Northern Germany, were used to grind corn and other grains such as barley, oats and rye. The French stones were the finest millstone available and known for their ability to produce the best flour. The quarries were discovered along the Marne River in the 13th century, and the French burrstones were exported throughout Europe starting in the 14th century. When mills in early Colonial America were first developed, these high quality quartz stones were desired and shipped over, along with German and English stones. In time millstone quarries were developed in America, and Washington’s mill may have employed a domestic set of stones for grinding corn as well.

In operation each of the two sets of stones employed a lower, fixed “bed” stone and an upper “runner” stone that could rotate at more than 100 times a minute. Grain was fed through a hole in the runner stone, known as the eye, and then ground between the two stones. Each stone face was cut with a pattern of grooves called furrows. These furrows worked like scissors to cut and grind the grain into meal or flour. The runner stone was adjustable so the miller could raise or lower it in relation to the bed stone. This was accomplished by working a long compound lever known as the lighter staff. With this lever the miller could adjust the gap between the millstones and therefore control the coarseness or fineness of the meal or flour.

4. Providing a reliable source of water for the mill was difficult.

The power needed to operate the mill came from the large waterwheel and the waterwheel needed a sufficient supply of running water to make its revolutions. To supply water to the wheel at a proper velocity, Washington's enslaved workers constructed a mill dam and pond at the upper end of Dogue Run Farm on the Dogue Run Creek. He then had them constructed an earthen canal, known as a millrace, to bring water down from the pond to the new merchant mill site. The trench that became the all-important millrace was almost two miles in length, seven or eight feet deep, and six feet wide.

The water entered the mill through a wooden box known as a flume, or penstock. The miller could open a water gate from inside the mill to release water into the wheel to operate the machinery. The speed of the water wheel varied depending on how much the miller needed to grind and how fast he wished to work. The mill could produce about 3,000lbs of cornmeal a day and another 5,000lbs of wheat flour a day.

Construction of the millrace began on April 26, 1770, and lasted longer than a year. Even after its construction, the millrace remained a source of frequent trouble. Silt that was deposited in the waterway needed to be regularly removed. Storms also damaged the race and repairs were frequently necessary. During the winter months, the water froze. And during hot, dry summer months the flow of water was not sufficient to operate the mill. In times with plenty of rain and water, the mill operated about nine months of the year, in times of drought records indicate that the mill might only run six months of year. Later Washington had constructed a tumbling dam or weir on Piney Branch and turned that additional water into the millrace.

5. In 1791, Washington was one of the first mill owners to install the Evans automated system.

During Washington’s presidency, a millwright and engineer named Oliver Evans developed an automated milling system that was subsequently submitted to the new US Patent Office. Evans developed an advanced system where the bucket elevator was designed to move grain and flour through the mill without manual labor. The system also operated Evans’ new “hopper boy” that helped to clean and sort the milled grains. Each step of the milling process was united into one automated system that provided mill owners with a way to lower their labor costs while maintaining high production volumes. After reviewing Evans’ application, President Washington approved the patent for this revolutionary new milling system and recognized the potential of this new system for improving his own gristmill. 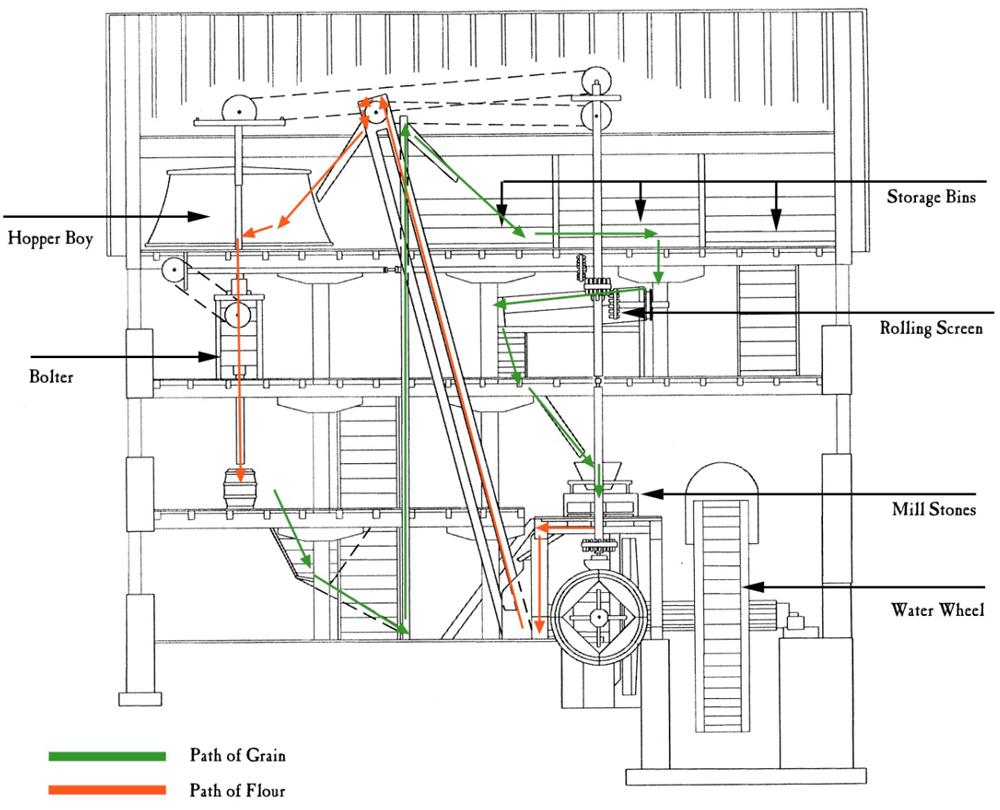 George Washington had his private secretary Tobias Lear contact Oliver Evans to see if he would come to Mount Vernon to install the new system in his mill. Oliver Evans could not get away from his business in Philadelphia, but in the fall of 1791 he sent his two brothers to Mount Vernon to install and retrofit Washington’s mill with the new system.

The reconstructed gristmill at Mount Vernon is the only mill in America that has a working Oliver Evans automated system – something that is well worth seeing during your next visit. 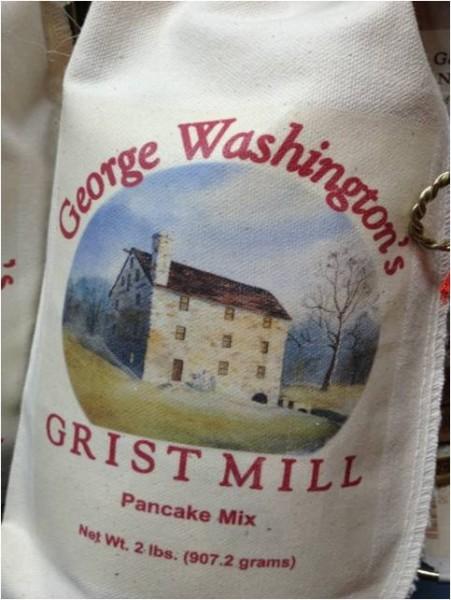 “Superfine” flour was a purer and more finely ground version of flour that could sell for a premium. According to Washington’s records in 1799, superfine flour could sell for $8.50 a barrel as compared to $7.50 to $8.00 a barrel for fine flour, $6.66 per barrel for lower grade “middlings”, and $1.50 a barrel for “shipstuff” – the lowest quality. Once the Evans automated system was installed, Washington’s more efficient mill was able to produce even more superfine flour, thereby boosting his profits.

7. The gristmill ground corn which was fed to the enslaved community and livestock.

In addition to grinding wheat into flour, the mill was also used to produce cornmeal that was an important staple for the enslaved community at Mount Vernon and an important feed source for Washington’s livestock. While Washington certainly loved his hoecakes and honey (made from cornmeal), corn was considered, at the time, to be of less value from an export point of view.

Cornmeal also proved to be an important ingredient in the production of spirits at Washington’s nearby distillery. But given the consistently high demand for ground corn for the Mount Vernon estate, Washington was forced to obtain this additional corn from outside sources.

8. The mill was operated by hired and enslaved millers.

To keep the mill operating at peak efficiency, Washington required the services of skilled millers. Over the years Washington employed three millers – William Roberts, Joseph Davenport, and Patrick Callahan. As mentioned above, Washington had seen to the construction of a home for the millers and their families that was next to the mill. Of the three, Roberts was the most skilled. He was a miller and a millwright, which is rare. Millwrights were contractors who worked on many mills in the area in which they lived. Washington commented in a letter to a friend that in 15 years (from 1770 -1785) he had never paid anyone for repairs to his mill since Roberts could repair or rebuild the mill machinery as needed. Sadly, Roberts's drinking problem forced Washington’s hand and in 1785 he fired him.

From 1784 or 1785 on, an enslaved miller named Ben is listed at the mill. Washington mentioned Ben in a letter and stated that he knew the milling business very well. In the late 1790s there was another young enslaved man working at the mill. His name was Forrester and he seems to be in training under Ben and the hired white millers.

Despite all the challenges in building, maintaining, and operating the mill, the enterprise proved to be a highly profitable one. In 1797, the gristmill produced 117 pounds of profit – the third-highest of any activity at Mount Vernon. In that year alone the mill ground more than 5,000 bushels (275,000 pounds) of wheat and another 3,200 bushels (178,000 pounds) of corn. Much of the surplus grain was sold to expanding markets in nearby Alexandria and Fredericksburg, but other shipments were sent as far away as England, Portugal, and the island of Jamaica.

In addition to grinding grain from his own operations, Washington’s mill also ground grain for neighboring farmers, who paid 1/8th of their grain in “toll.” Merchant mills of this type could also ground grain bought from farmers and then sold for a profit.

Washington regularly paid close attention to factors affecting local and world demand for his flour. While President of the United States, Washington took keen note of the positive and negative impacts that the 1793 war between Britain and revolutionary France would have on his grain exports. Seized American merchant vessels, the threat of famine, embargoes, and the continued population growth at home all factored into his production and investment decisions at Mount Vernon. 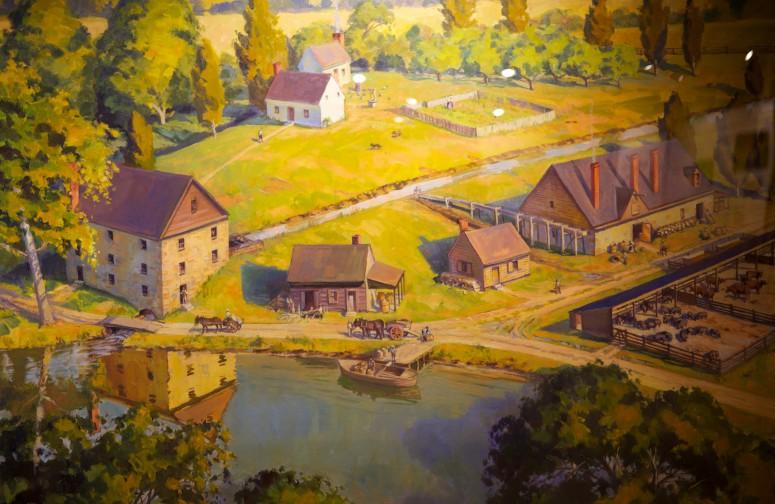 10. The gristmill was torn down about 1850 and rebuilt in 1932 by the Commonwealth of Virginia.

In 1932, in support of the bicentennial of Washington’s birth, the Commonwealth of Virginia constructed a replica of the mill after extensive archaeological efforts relocated the foundation of the original mill. Virginia operated the mill until 1997 when it was transferred to George Washington’s Mount Vernon. After a five-year restoration, Washington’s gristmill was returned to its operational status and opened to the public where it remains today one of the great sites to visit at Mount Vernon. 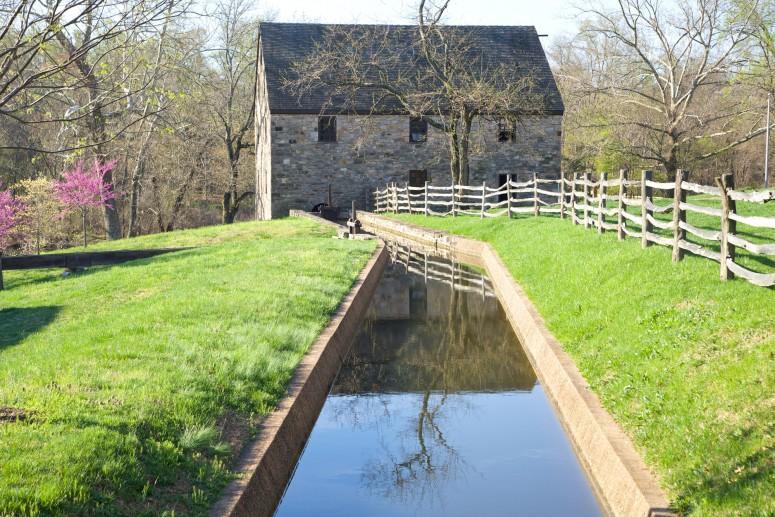