Visitors are welcomed to Mount Vernon by friendly bronze statues of George Washington and his family in the Ford Orientation Center. 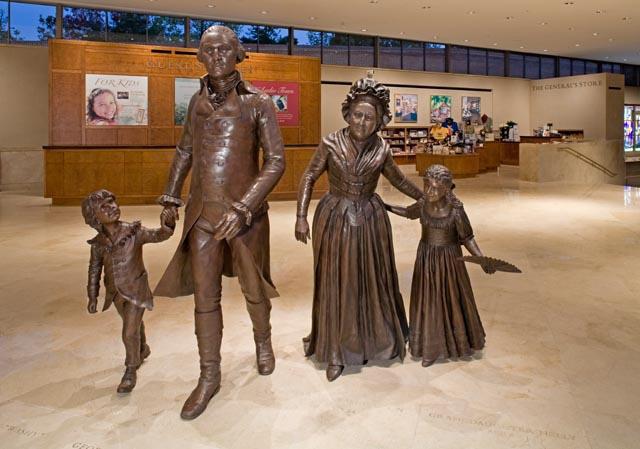 Despite his appointment in perpetuity to the singular position of "The Father of Our Country," George Washington is seldom seen by most Americans as a family man. Yet he was quite involved with raising two of Martha Washington's children, and then two of her grandchildren. In fact, during most of their 40 years together, George and Martha Washington were accustomed to hearing the pitter-patter of children's feet throughout their riverside home.

When the Ford Orientation Center opened in October 2006, a bronze sculpture groupings of the Washington family, designed and implemented by a team of sculptors at StudioEIS in New York, was prominently displayed just a few feet inside the entrance to the building. George and Martha Washington can be found walking hand-in-hand with granddaughter Nelly, age six, and grandson Washy, age four. 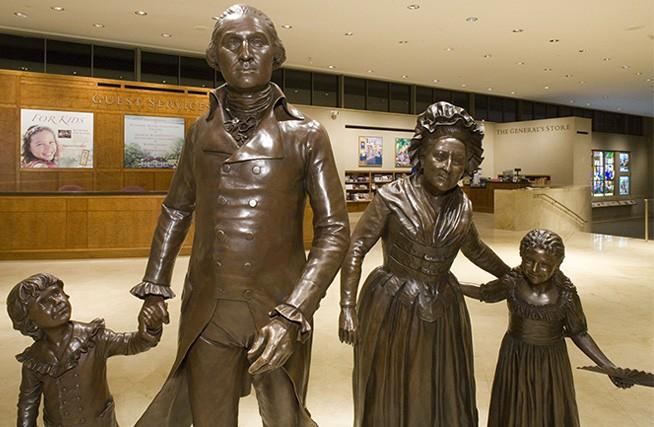 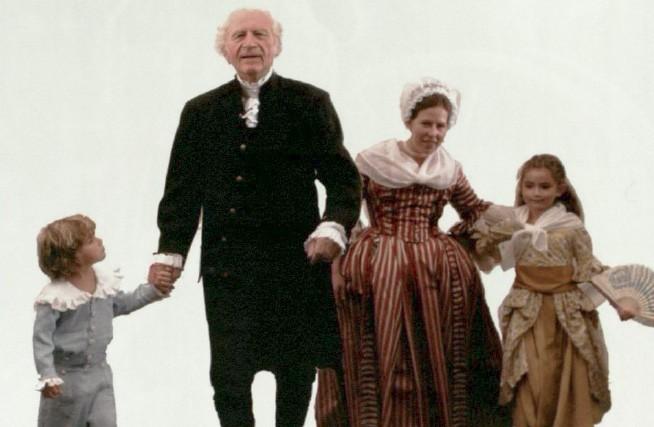 In order to create a more lifelike sculpture grouping, experts at StudioEIS selected stand-ins with the same physical attributes as George and Martha Washington and her two youngest grandchildren, Nelly and Washy.

More than 800 pictures were taken of different poses and movements, in an effort to capture a natural and engaging rapport between the four family members. Using computer technology, the pose above was constructed when elements of five photographs were blended together.

The actors from left to right are Owen Spencer, William Sommerfteld, Susan Zickel, and Emily Robinson.

Mount Vernon members are a committed group of donors who are united by their admiration for our nation’s first and greatest patriot, George Washington.

"The idea is a simple one -- the Washington family will be welcoming other American families to their plantation," noted Gay Hart Gaines, Regent of the Mount Vernon Ladies' Association. "It's a way of saying at the very start of the tour that the experience at Mount Vernon will be a warm and personal one. We want our visitors to think of Mount Vernon as a family's home, not just a historic house."

The idea for the sculpture grouping was suggested by Richard Molinaroli of MFM Design, who oversaw the design of non-exhibition spaces in both the Ford Orientation Center and the Donald W. Reynolds Museum and Education Center.

The image of George Washington was informed by the results of a research project that involved forensic anthropologists, computer gurus, and art experts. In trying to capture the likenesses of Martha Washington and her grandchildren, however, sculptors have been forced to take a more old-fashioned approach -- a review of portraits by different artists of the period.

The challenge was exacerbated by a keen desire to make the family group as authentic and engaging as possible. "We want to show family members reacting to each other in a realistic manner," said Mrs. Gaines. "in the hundreds of different portraits and prints that exist of George Washington, it's impossible to find even a hint of a smile. But there is reason to believe that he was a fairly typical grandfather, who took joy in the antics of his grandchildren. And Nelly and Washy were like most grandchildren in they usually knew how to get their way."

So was George Washington an indulgent grandpa? Perhaps.

When she became an adult, Nelly reminisced about her unique relationship with her step-grandfather. In so many words, she almost implies that the former president was wrapped around her little finger:

His presence generally chilled my young compatriots and his own relations feared to speak or laugh before him ... I never felt that awe of him which others did ... He liked me to ask him for all that I wished to have and never refused me anything.

Martha Washington once described Nelly as "a wild little creature," and she was known to run through the presidential household disrupting the president and his cabinet members.

George Washington Parke Custis was only four years old when he started living with his grandmother Martha and her husband, who just happened to be the most famous person in America.

Born in 1781 to John Parke Custis, Martha Washington's son from her first marriage, George Washington Parke Custis was adopted by George and Martha upon the death of his father. Custis was raised at Mount Vernon and remained a prominent figure in Washington City and Alexandria until his death in 1857.

"Even people who know quite a bit about George Washington don't usually recognize him in this role," noted Mrs. Gaines. "He really faced many of the challenges that parents and grandparents still confront today."

The cost of creating the new sculptures was not part of the original budget for the Ford Orientation Center. Fortunately, a generous grant from Mr. and Mrs. Robert H. Smith, who are also sponsoring the larger of two auditoriums in the same structure. "We're thrilled, and so very grateful, that Bob and Clarice Smith have stepped forward once again to make the Mount Vernon experience more memorable."