Mount Vernon most recently hosted Their Royal Highnesses The Prince of Wales and The Duchess of Cornwall on Wednesday, March 18, 2015. Since acquiring the landmark property in 1858, the Mount Vernon Ladies’ Association has welcomed many notable guests to Mount Vernon, the Virginia estate of America’s first president, George Washington. These distinguished guests include quite a few members of the British royal family.
Take the Prince Charles Tour
Ticketing terms and cancellation policy 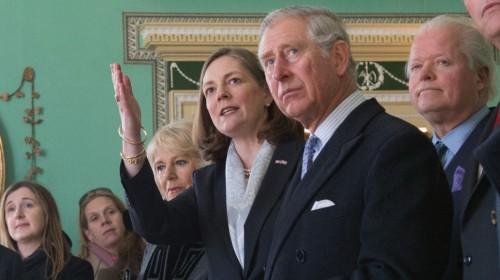 The first member of the British royal family to visit the United States, King Edward VII, son of Queen Victoria, came to Mount Vernon on October 5, 1860 when he was still known as Albert Edward, Prince of Wales.

The welcoming party included U.S. President Buchanan, U.S. Supreme Court judges, and members of the U.S. Congress. During his visit, the Prince consented to plant a small buckeye tree in front of Washington’s Tomb in commemoration of the historic visit.

The son of Queen Victoria, Prince Arthur (later known as the Duke of Connaught) arrived on the estate in 1869, four years after the conclusion of the American Civil War.

The next British royal to travel to Mount Vernon was Princess Aribert (Princess Marie Louise of Schleweswig-Holstein), a granddaughter of Queen Victoria, in 1900. She was accompanied by the U.S. Secretary of State, John Hay.

According to Colonel Harrison Howell Dodge, the Director of Mount Vernon from 1885-1937, Princess Aribert “expressed much interest and pleasure in her visit and commented most favorably on the beauty of the place, saying that America owed a great debt to the devoted Ladies who had preserved this historic spot to their country." (1)

After the First World War, while he was still known as the Prince of Wales, King Edward VIII (later known as the Duke of Windsor) arrived at Mount Vernon by automobile on November 13, 1919, accompanied by U.S. Vice President Marshall. Following the tradition introduced by King Edward VII, the Prince planted a small English yew tree near Washington’s Tomb.

On the eve of the Second World War, King George VI, brother of King Edward VIII and father of Her Majesty Queen Elizabeth II, was a guest at Mount Vernon on a sweltering summer’s day on June 9, 1939. Arriving on President Franklin Roosevelt’s yacht, the King and his wife, Queen Elizabeth, were accompanied by the President and First Lady Eleanor Roosevelt, members of the President’s Cabinet and their wives, officials of the British Embassy, as well as other noted guests. As they disembarked, they were greeted by the Regent of Mount Vernon Ladies’ Association, Mrs. Horace Mann Towner and the director of Mount Vernon, Charles Cecil Wall, as well as twenty-four Vice Regents, or board members, of the Mount Vernon Ladies’ Association. The King was presented with a set of The Diaries of George Washington, which “was received with special gratitude and appreciation." (2)

During the Queen’s most recent visit in 1991, she and Prince Philip were shown the Mansion and outbuildings. Her Majesty placed a wreath at Washington’s Tomb. Afterwards, the Queen and the Regent of the Mount Vernon Ladies Association, Mrs. Clarence M. Bishop, dedicated the newly-renovated wharf on the Potomac River. Her Majesty received flowers from Washington’s garden as a token of appreciation.

You Too Can Visit Mount Vernon

Visit the Home of George and Martha Washington