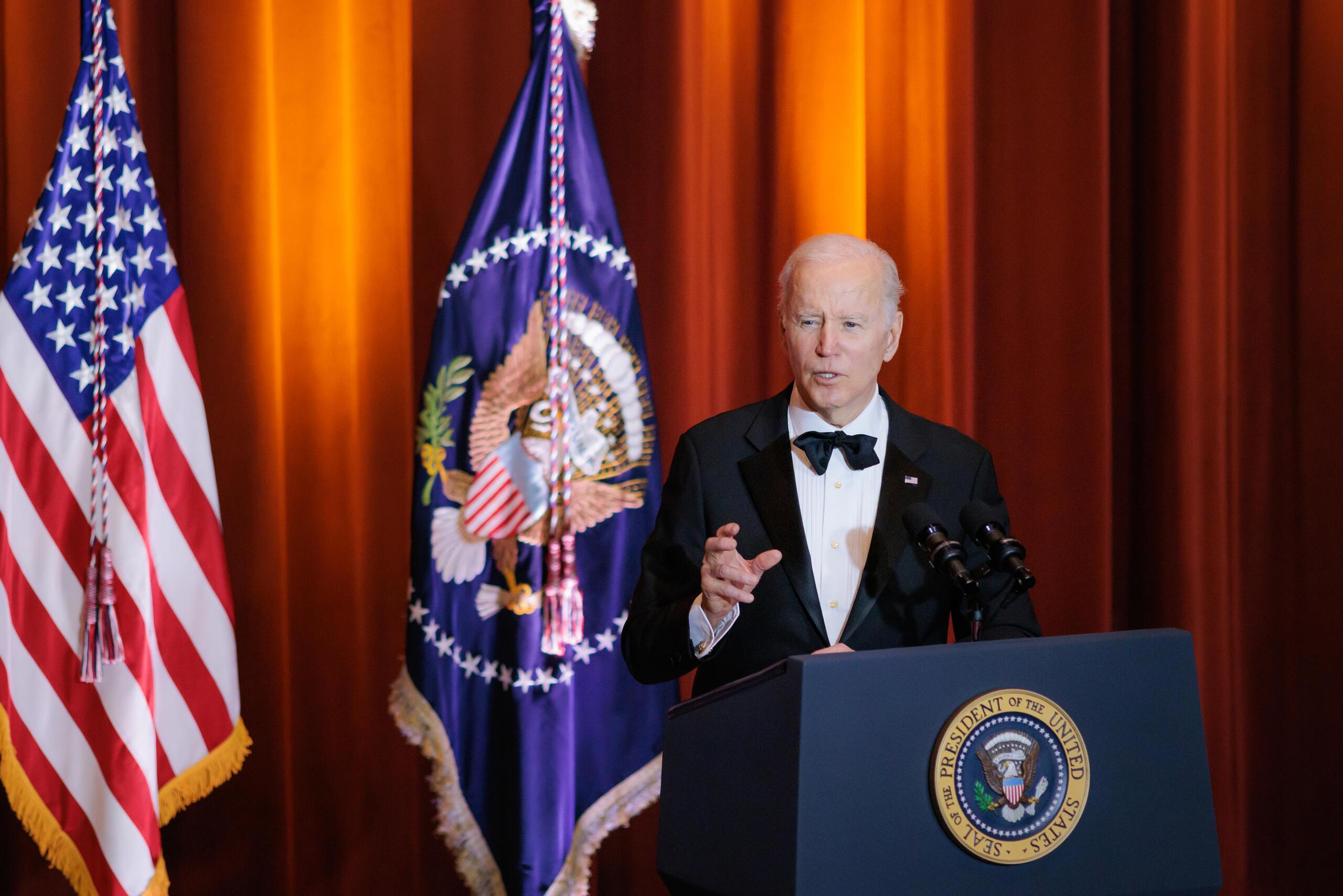 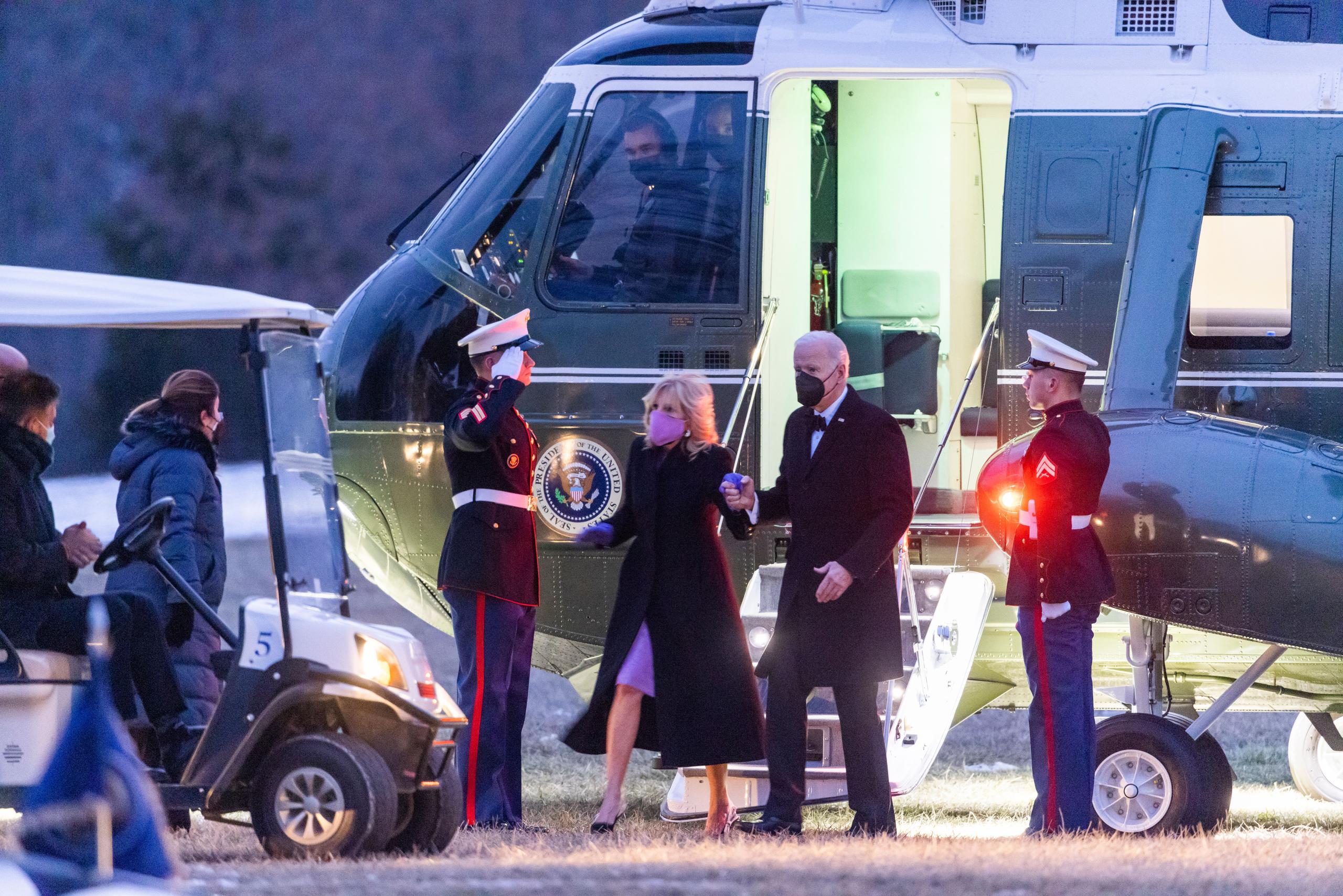 President Biden and First Lady Jill Biden visited Mount Vernon on Sunday, January 30, 2022 to address the National Governors Association (NGA). They traveled to Mount Vernon by Marine One and landed on the 12-acre field overlooking the Mansion. The previous evening’s wintery mix provided a snowy ground cover, and George Washington’s iconic Mansion was illuminated for the occasion.

The President and First Lady were greeted by the Regent of the Mount Vernon Ladies’ Association, Mrs. Margaret Nichols of Maine, and Dr. Douglas Bradburn, President and CEO of Mount Vernon, in the Ford Orientation Center where the event was held. Thirty-six Governors were in attendance representing the nation’s states, commonwealths, and territories. The President and First Lady were also greeted by NGA Chair Governor Asa Huchinson of Arkansas and Vice-Chair, Governor Phil Murphy of New Jersey.  Distinguished guests included noted philanthropists David Rubenstein and William Clay Ford Jr, Executive Chair of the Ford Motor Company.

The Bidens examined displays of original Washington objects including Washington’s smallsword, which he wore upon resigning his military commission to the Continental Congress in Annapolis in December 1783; Martha Washington’s diamond pocket watch, a gift from George Washington; the original dove of peace weathervane; and Washington’s personal copy of the First Acts of Congress with his annotations. President Biden showed particular interest in the Acts of Congress and the notations that our nation’s first President made in interpreting the brand new roles and responsibilities of the various branches of government.

The President delivered remarks in the Smith Theater to the audience of Governors and their guests, where he emphasized the importance of unity, reaching across the aisle, and building personal relationships with peers. Founded in 1908, the National Governors Association brings together Governors to identify priority issues and deal with matters of public policy and governance at the state, national and global levels and the President’s message aligned with the mission of the NGA. 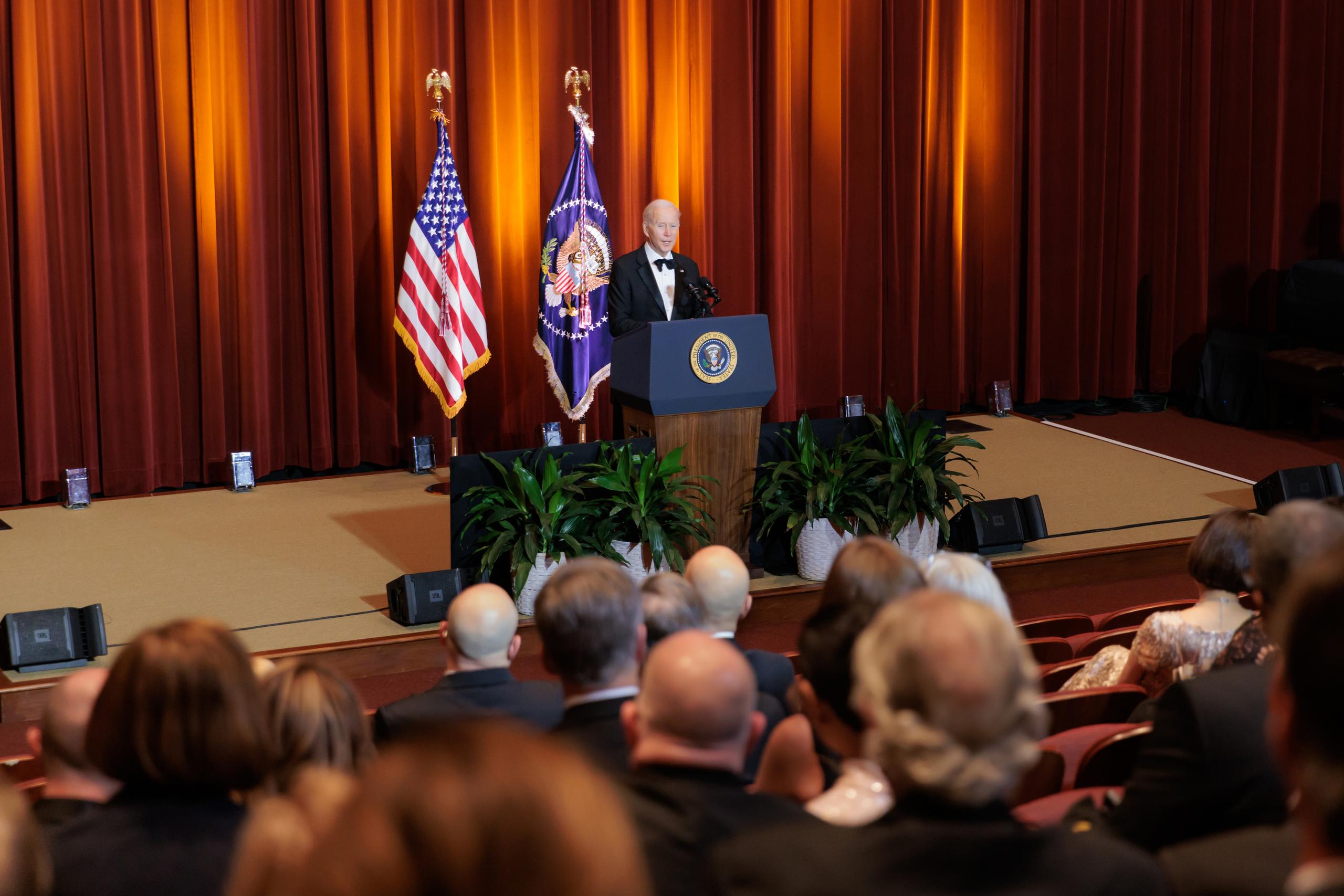 President Biden reflected on the significance of meeting at the home of George Washington, and the ideas set forth by our nation’s founders to create a more perfect union.  He remarked that the “nation was built on an idea. The only nation in the world built on an idea, every other nation is built on ethnicity, geography, religion, et cetera. We were built on an idea, the idea of liberty, an opportunity for all. We’ve never fully realized that aspiration of our founding, but every generation has opened the door a little wider and every generation has opened it wider and wider to be more inclusive, include those who have been excluded before. It’s a mission handed down generation to generation, the work of perfecting our union.”

The President ended his remarks to great applause from the Governors and returned to Marine One en route to the White House.

The dinner concluded with celebratory huzzah toasts by “General Washington” with whiskey produced at George Washington’s Distillery and finished with the Governors and guests enjoying a candlelight tour of Mount Vernon by Regent Margaret Nichols and Mount Vernon’s interpretive staff. 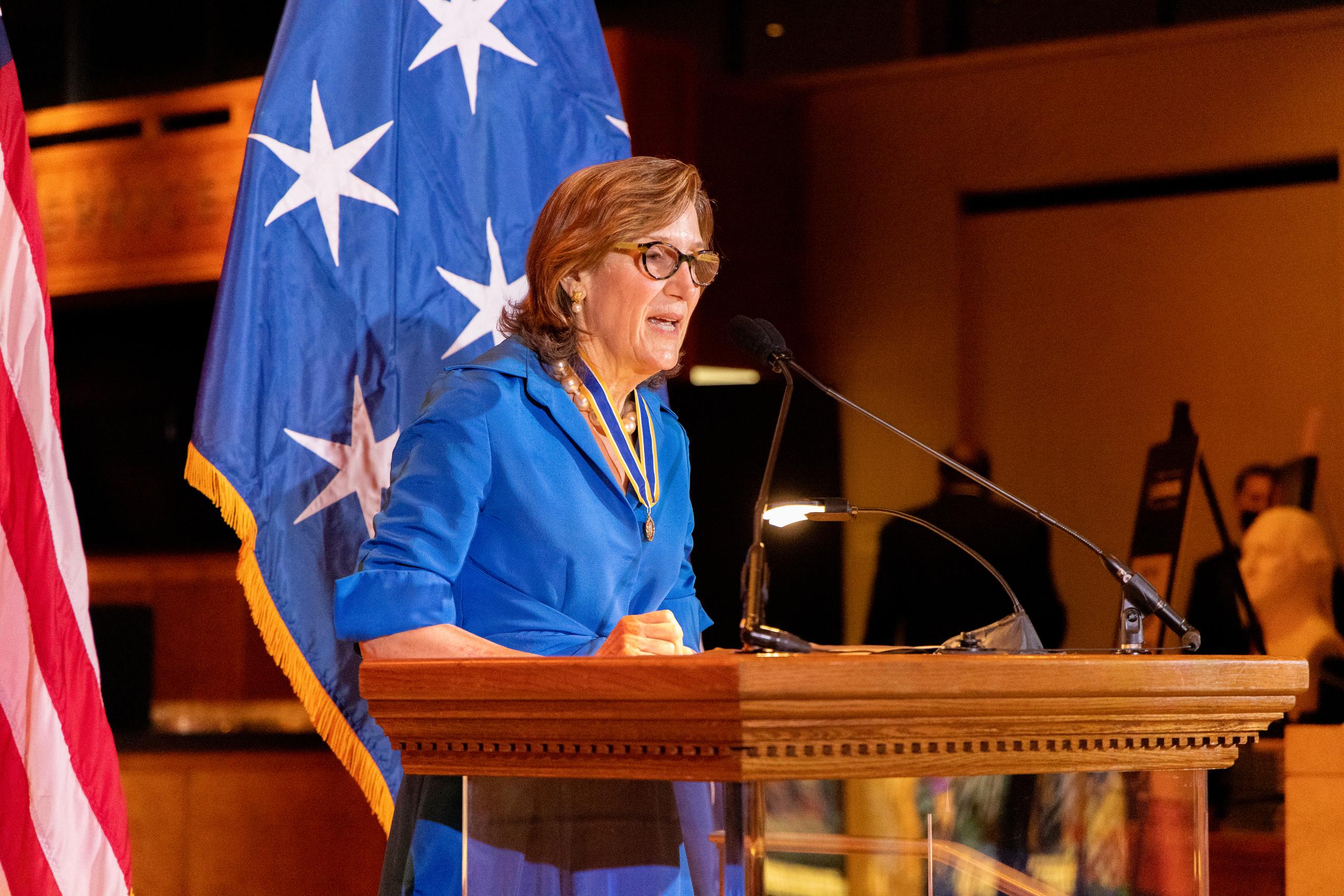 “Washington reflects the best of our nation, the best of a United States. And those ideals deserve to live in our hearts and inspire our lives.

Mount Vernon not only stands as a living Memorial to George Washington's legacy, but as a North Star. It is a beacon to all who believe in the democratic ideal. I hope you will join us after dinner this evening to take a walk in Washington's own footsteps to the mansion. It will be my honor to open the door to the home he so cherished.” 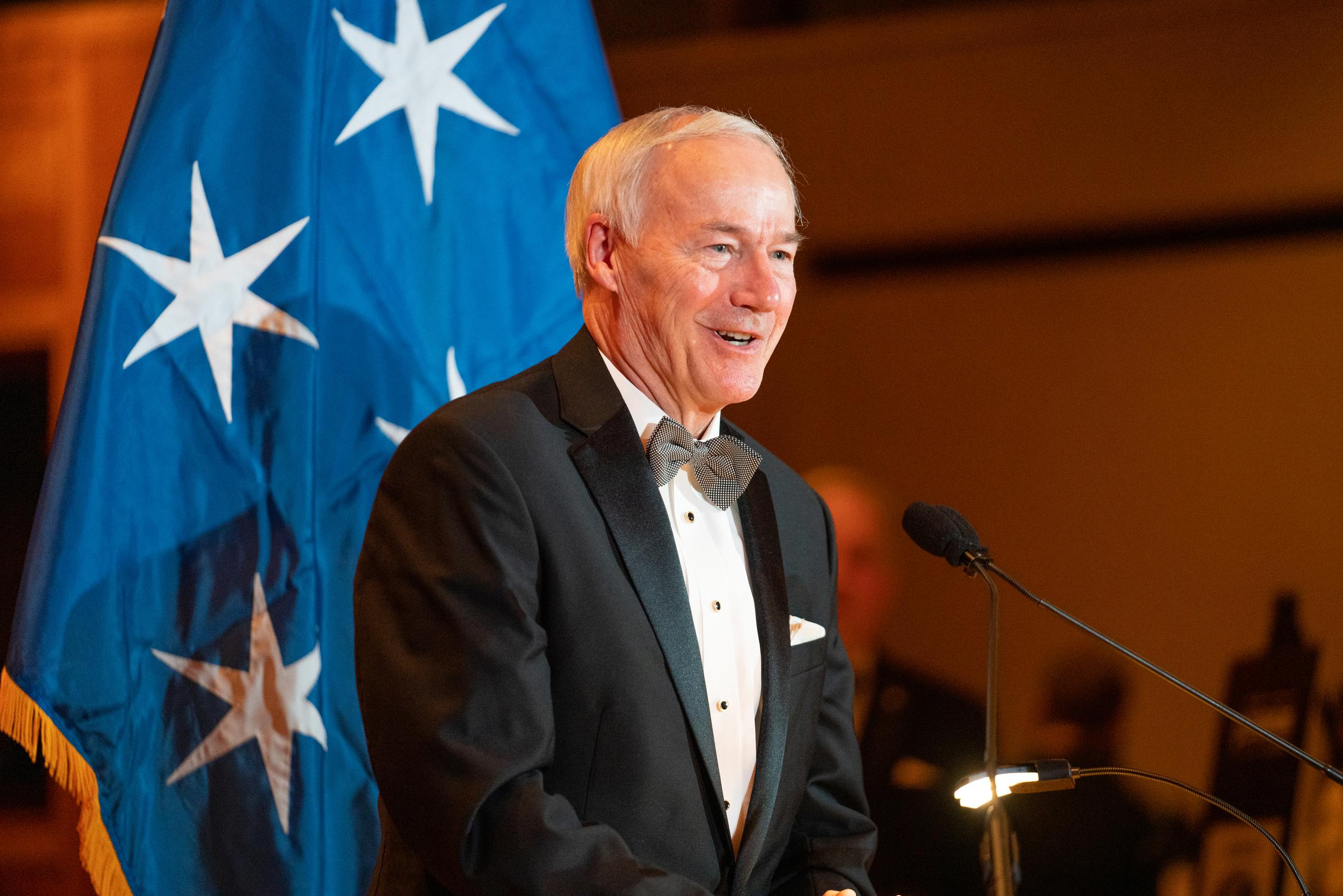 “I think back about General Washington, and his life that we've all studied and in his life to me, he represented first of all, public service. Not always striving for it, quietly willing to do it and answered the call of our country time and time again. And, public service is important today. And sometimes, you worry about people getting discouraged and the turmoil and entering public service.

And then you look at his life and one thing that really stands out is a sacrifice that he made during the revolutionary war, leaving Mount Vernon, his lovely home, going and serving the country through two terms as president … And the last thing I think about with General Washington, President Washington, is his desire for unity in our country. And today, we engage in public service.

We sacrificed a little bit, nothing compared to those in times of war and times at the beginning of our country, but we all can fulfill his goal of unity of this country. And, he did put the country first and that's what we really have to do.” 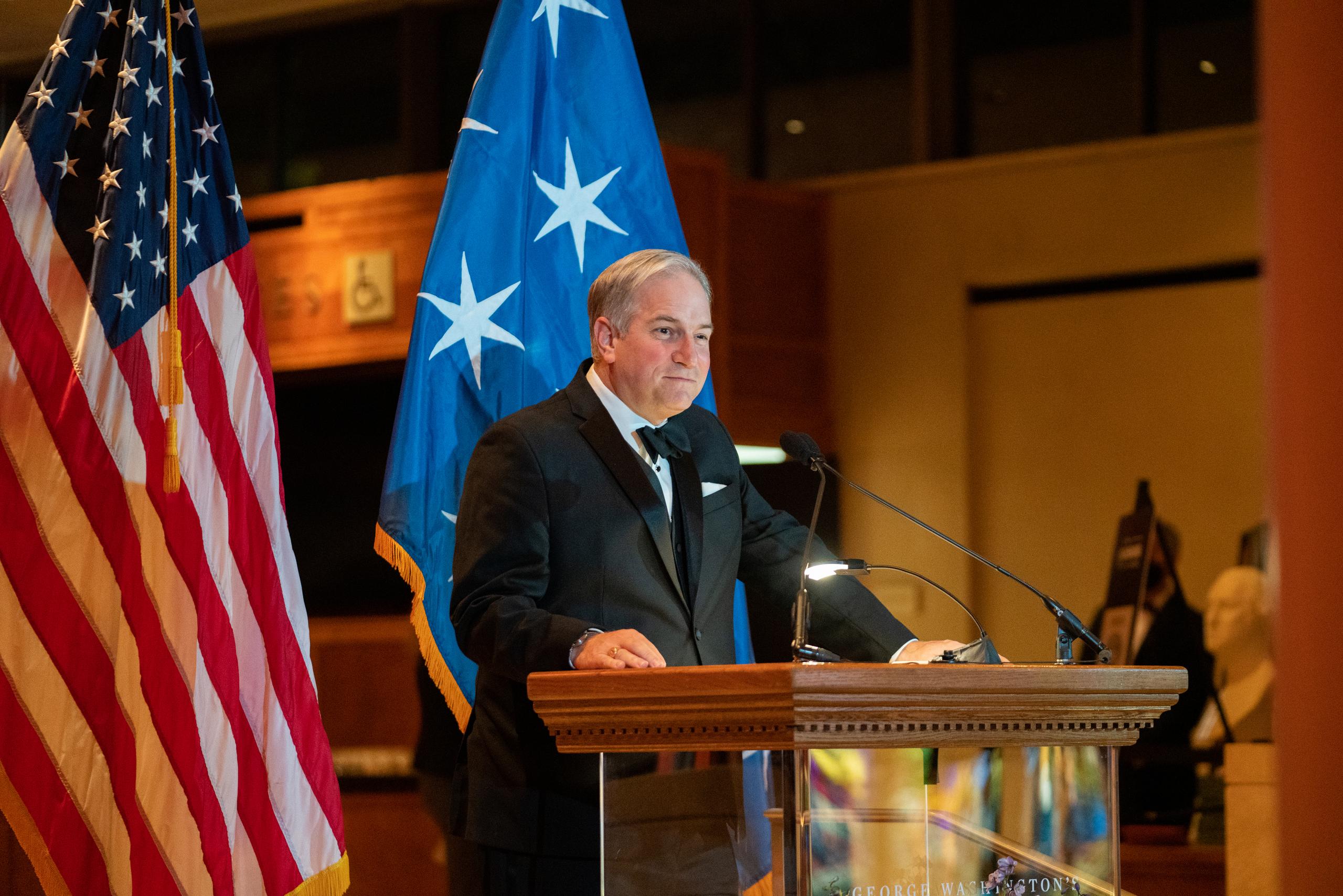 “When George Washington famously resigned his commission as commander in chief, our first commander in chief, and came back to Mount Vernon, he made history and helped establish the path of the United States as a country, which will be based on the rule of law and not on the rule of a petty dictator or a generalissimo. His first title actually was Generalissimo George Washington. Who does that remind you of? What generalissimos might you know, that haven't ever stepped down? That's an extraordinary thing that he did. But the last formal message he sent before he gave up power was circular to governors of the states. It was to the governors. It was the last formal letter he wrote. And it's worth quoting a bit, because the message I think is as prescient as ever and I think you all are the ones who can hear it. As he wrote, "The citizens of America should be considered as the actors on a most conspicuous theater."

"The foundation of our empire was not laid in the gloomy age of ignorance and superstition, but in an epic, when the rights of mankind were better understood and more clearly defined than in any form or period. And at this period, the United States came into existence as a nation and if citizens should not be completely free and happy, the fault will be entirely their own." "It is their choice and depends on their conduct, whether they will be respectable and prosperous, or condemnable and miserable as a nation, for our fate with the destiny of unborn millions be involved."

He listed four things, he said, they were essential as he said, "Humbly conceive, or essential to the wellbeing and to the existence of the United States as independent power." The first thing was union, the second thing was a sacred regard to public justice, so union, justice, the third was peace. And the fourth he wrote was a friendly disposition amongst the people of the United States to forget their local prejudices and policies, and to make those mutual concessions, which are requisite to the general prosperity. And in some instances, to sacrifice their individual advantages to the interest of the community. These are the pillars he wrote on which the glorious fabric of our independency and national character must be supported.

Washington's hopes for the leadership of the governors to lead the nation after independence, to win the peace as he had won the war. And they speak to the ideals of the National Governors Association to find ways in which the states and our union can work collectively to help solve the most pressing problems of our time.”

“My comments, my thoughts, my beliefs, all revolve around the love of my country, which will be the ruling influence of my conduct and the constitution, which is the guide, which I will never abandon. It is summed up, all of it, in my letter of farewell to America. You see, four months past, I released a circular letter proclaiming my intention to not seek a third term in the presidency. It was mis-appropriately referred to as a farewell address. And I say that because it was not an address at all, but a letter, if you will, released to the American people.

In it, I conveyed a series of suggestions and warnings that I believe all of us who are elected as stewards of the public trust would do well to heed. Amongst these, the importance of the union that bonds all Americans together and provides for their freedom and prosperity. I reminded all how difficult it was to win the independence and liberty the nation currently enjoys. And I warned them that the only way to safeguard their hard won system of democratic Republican government was for the country to remain united in a federal union. I further cautioned them against three interrelated dangers that threatened to destroy that union: regionalism, political partisanship, and foreign entanglements. My strongest warning dealt with factionalism, which as I have written, encourages the electorate to vote based on party loyalty rather than the common good. I conveyed my fear that that partisanship would lead to a spirit of revenge in which party men would not govern for the good of the people, but only to obtain and maintain their grip on power. I concluded by warning our fellow Americans to guard against would be despots who would use parties as potent engines to subvert the power of the people and to usurp for themselves, the reins of government.

But, alas, regardless of political leanings tonight, we come together in the spirit of civility, amity, and mutual concession. And it is civility, amity, and mutual concession of, and by, those of us charged with governance of this sacred nation and its states that will assure its ongoing success and prosperity. Remember, you must always act without self-interest and for the common good, and you must always mitigate the ill effects of faction and division. And therein lies the secret of how we successfully formed up and raised up this nation, and it is the same secret to your success and to the future of our beloved country.”