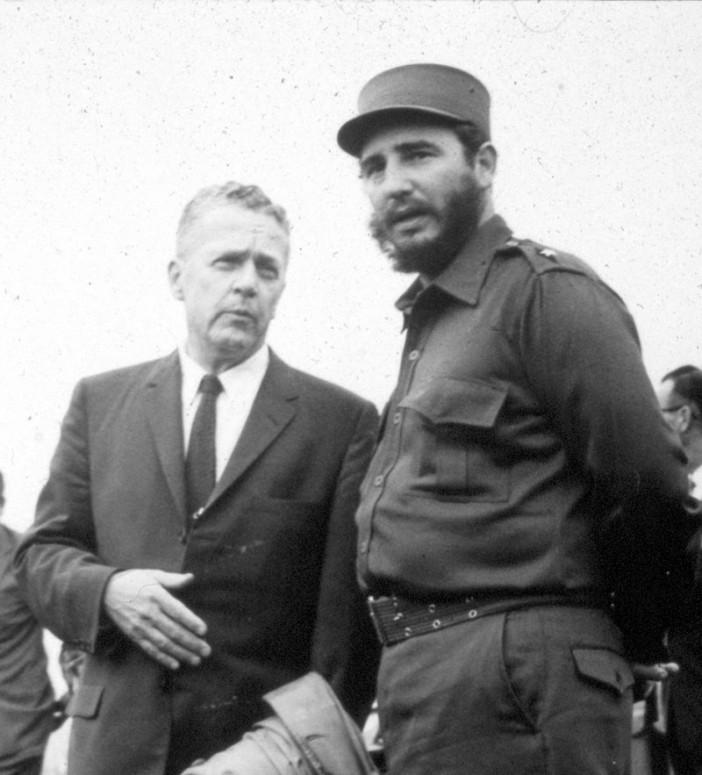 Throughout his "Good Will" tour, Fidel Castro emphasized his ties to the U.S. revolutionary past through his much photographed visits to symbols of American democracy: the Jefferson Memorial, the Lincoln Memorial, and, of course, Mount Vernon.

According to the Mount Vernon Ladies Association (MVLA) Council minutes, Regent Rosamond Beirne felt she “could not gracefully decline to be hospitable to a successful revolutionist,” especially when requested by the U.S. State Department.  At the same time, she compared Castro’s visit to storm-related “heavenly visitations” that produced anxiety as well as excitement. Regent Beirne was also well aware that, due to threats of violence directed against Castro throughout his tour, the price of entertaining and protecting Castro was the financial loss incurred by closing Mount Vernon to the general public during the visit.

From the start, it was not a typical visit. While the majority of his eighty man entourage looked like the types of businessmen, military officers and reporters who typically escorted foreign dignitaries, Castro was accompanied by his own armed security force: nineteen young guards drawn from his guerilla army.  Castro was dressed in rumpled army fatigues with long hair and a shaggy beard as reminders of his revolutionary past.  His guards wore the same shabby army fatigues, but they were fully armed, carrying rifles at all times.  According to Regent Beirne, fifty three Fairfax County police were also present and “hiding in the bushes” to prevent pro-Batista forces from following through on their threats. Still, the visit went smoothly and the only “military” action was limited to distributing dolls dressed in rebel uniforms.

Castro was at his most charming during the visit to Mount Vernon where he signed the guest registry, and toured the mansion.  He also showed his interest in the history of Mount Vernon, and was photographed reading Mount Vernon: The Story of A Shrine by Gerald W. Johnson and MVLA Superintendent Charles Cecil Wall. He spent more than an hour walking around Mount Vernon, laid a wreath on Washington’s tomb, and claimed Mount Vernon was “the most interesting thing I have visited.”