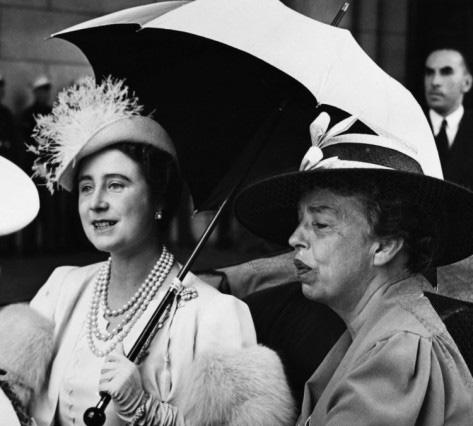 1933 and many other occasions

Mrs. Roosevelt came out to Mount Vernon many times:

1. She paid a call on the Mount Vernon Ladies’ Association on May 15, 1933, in response to an invitation for tea, which was issued by the Regent. She took tea on that occasion in the Council Chamber with the Ladies. (Illustration).

2. In the list of “Floral Tributes” placed at the Tomb on February 22, 1934, there is a reference to a wreath, which appears to have been placed there by President & Mrs. Roosevelt (the language in other years indicates that the wreath was placed there “for” or “from” the President and his wife).

3. Mrs. Roosevelt again accepted the Ladies’ invitation too tea, coming to Mount Vernon on Wednesday, May 16, 1934. She arrived at 3:30PM and was greeted in the Council Room by Colonel Harrison Howell Dodge; tea was served in the Regent’s Quarters.

4. Both President and Mrs. Roosevelt came to tea on Thursday, May 14, 1936. They were received in the mansion by the Regent and Vice Regents; tea was served in the Family Dining Room, while the President sat on the piazza. The visit was described as “a very interesting and delightful occasion, long to be remembered by those who participate in it; a very beautiful afternoon.” It was said that the “President looked very well and engaged in conversation with various Vice-Regents.”

5. Mrs. Roosevelt came to Mount Vernon on November 8, 1936, with Madame Jusserond, the widow of the former French ambassador.

6. As in 1934 (see #2, above), it appears that President and Mrs. Roosevelt may have personally brought a wreath to the tomb on February 22, 1937. The President’s log for that day shows that from 3:50PM-5:25PM, he “motored” down to Mount Vernon with two aides, but does not mention his wife.

9. On June 9, 1939, the President and Mrs. Roosevelt escorted Britain’s King George VI and Queen Elizabeth on a visit to Washington’s home. Here is a description of that event:

“The roll of distinguished visitors for the year is of course headed by the visit on June 9, 1939, of their Majesties, the King and Queen of Great Britain. One hundred and fifty-six years after the American colonies achieved their independence from the rule of George III, his direct descendant, George VI, came to us in cordial friendship to lay a wreath upon the sarcophagus of the victorious commander of the American revolutionary forces. It was an impressive and historic moment in the annals of Mount Vernon. The grounds were closed to the public on the day of the visit until after the departure of their Majesties and no visitors were admitted except the Vice-Regents and their guests. Newspaper representatives and photographers were here in impressive numbers and a large detachment of secret service men. Great responsibility was felt for the safe conduct of the royal visitors and all details were discussed and planned in cooperation with the State Department.

“Their Majesties came to Mount Vernon on the President’s yacht accompanies by the President of the United States and Mrs. Roosevelt, members of the President’s Cabinet and their wives, officials of the British Embassy, and other distinguished guests. The party was met at the boat landing by your Regent and the Superintendent [Charles Cecil Wall] and proceeded at once to the tomb, where King George deposited a wreath in impressive silence. After this ceremony the Vice-Regents hastened to the Mansion, where the presentations were to take place, while the rest of the party strolled up the hill, trying to forget that the thermometer stood at over 90 [degrees]. After the presentation of the twenty-four Vice-Regents present the royal visitors and their party were escorted through the Mansion and gardens. Both their Majesties were appreciative and responsive and apparently sincerely interested in that which had been done at Mount Vernon. The King evinced a special interest in the names of the states as they were mentioned in presenting the Vice-Regents and commented upon the difficulty of giving both the name and the state of each Vice-Regent correctly. The Queen’s kindly request to have Reith, our Scotch [sic] gardener, presented was an incident which illustrated their gracious interest and courtesy. The only confusion which occurred during the visit was caused by the over-zealousness of some of the secret service men. The visitors returned to Washington by motor seemingly happy in spite of the extreme heat and formal clothing. A pictorial record of this eventful day will by shown you.” At some point, the King was presented with a set of The Diaries of George Washington, which was received “with special gratitude and appreciation.”  (1939)

10. On George Washington’s birthday of 1943, Mrs. Roosevelt returned with her husband and Madame Chiang Kai-Chek.