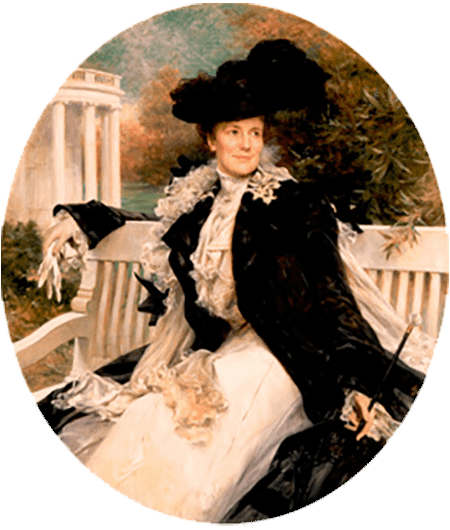 1906 and several other times

Here is the description of some of Mrs. Roosevelts visits:

“During the last year of Roosevelt’s term, his youngest son, Quentin, was a pupil at the Episcopal High School near Alexandria. Here the boys were given liberty on Monday instead of Saturday as is customary in most schools. On this account when Quentin went home, he was without playmates, his companions being at their studies.

“His mother, therefore, planned various excursions for him, making them, whenever possible, to places of historic interest. Often these would be on the U. S. S. Sylph and not infrequently they would stop at Mount Vernon. On these occasions I would pilot the party on short tours afoot about the estate.

“With Mrs. Roosevelt and Quentin would be Miss Ethel Roosevelt, Miss Belle Hagner, Lieutenant Williams, who commanded the Sylph, and sometimes Major Archibald Butt and Archie Roosevelt. All were ardent pedestrians and found enjoyment in searching out long-forgotten landmarks; such as the site of Washington’s grist-mill, when his flour was shipped to England and the West Indies; the site of his distillery that utilized surplus crops of rye, turning out, the year before the General’s death, as much as 12,000 gallons of prime rye whiskey.

“The former location of the huge octagonal barn, with grain floor equal in area to the rotunda of the Capitol, excited Quentin’s inquisitive mind, especially its provision of the previously mentioned spacious basement…On one occasion we walked to Woodlawn…It is a four-mile jaunt from Mount Vernon. The Mansion, designed by Washington’s friend Thornton, and completed in 1803, was in beautiful order for Mrs. Roosevelt’s inspection, and she greatly enjoyed the view from its veranda, compassing the 8,000-acre plantation which was the extent of Washington’s holdings.

“From Woodlawn our walk extended southward to the ruins of Belvoir…

“On the way to the foot of the bluff, where the Sylph awaited us, we stopped at the then ill-cared-for burial ground where rest the remains of several of the Fairfax family….

“On other Mondays excursions were made to Gunston Hall…and to Warburton Manor, now Fort Washington….

“We once walked a bit further inland from Warburton, to see “Broad Creek Church,” the principal pew of which is marked with a brass tablet telling that Washington did own the pew and often worshipped there….

“An especially memorable trip was to Pohick Church, the regular place of worship of the Washington family before the Revolution. It is seven miles’ distant from Mount Vernon; too far, I thought for the ladies to walk comfortably, so it was arranged for the Sylph to stop for me at our wharf and proceed to Gunston Cove, where we anchored. Set ashore by the launch at Cedar Grove we were then within three miles of our destination.

“The worthy rector of Pohick, to whom I had telephoned of our coming, was patiently awaiting us. He seemed a bit embarrassed on learning that he was being presented to the First Lady of the Land, and was to have the honor of conducting her through the ancient sanctuary.

“The instructive character of his narrative and the convincing earnestness of its rendition deeply impressed every one. This was emphasized later when, on our way back to the yacht, Mrs. Roosevelt expressed her feeling of appreciation of what the good man had told about the church. She wanted to know somewhat of the rector’s circumstances, how much of a family he had, whether he was adequately compensated, and so on. My explanation of the small salary and his necessarily frugal method of living excited surprise and sympathy. Apparently that ended the matter, but later developments showed that this kindly lady, amid her great press of duties, had not forgotten.”