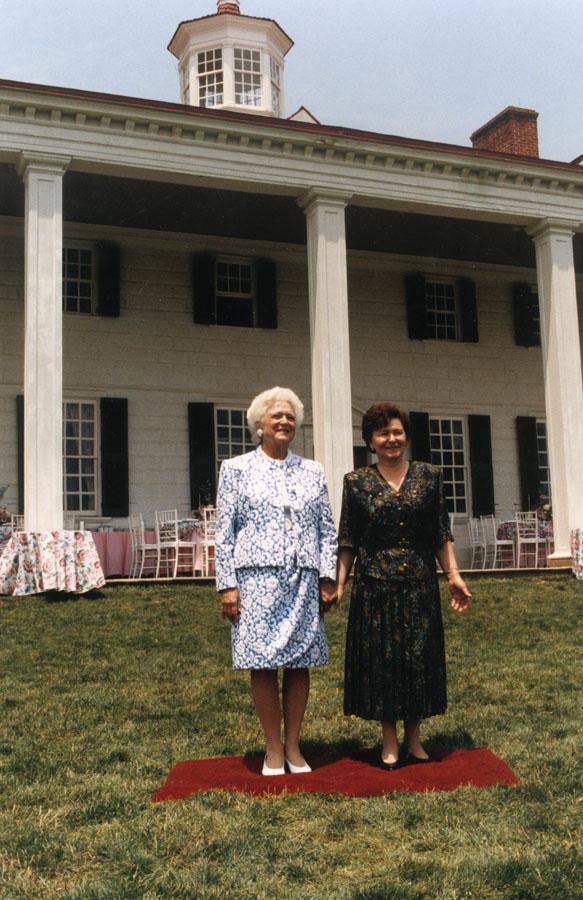 It's not often that a First Lady tours Mount Vernon, so it was quite an occasion on June 17 when two First Ladies were escorted through the Mansion by Mrs. Clarence M. Bishop, Regent of the Mount Vernon Ladies' Association, and Curator Christine Meadows.

When Mrs. Bush arrived, she was warmly greeted by Mrs. Bishop, a long-time friend. A few minutes later, the two of them welcomed Mrs. Yeltsin, and the group began their Mansion tour. While viewing the Washington bedroom, Mrs. Yeltsin was particularly interested to learn that it was Martha Washington, not her husband, who ordered the extra-long bed. And in the study, after Miss Meadows pointed out the table on which George and Martha Washington had their wedding breakfast.

Mrs. Bush remarked to Mrs. Yeltsin "I read in the paper that when you were married, you didn't have a table."

Mrs. Yeltsin nodded, and Mrs. Bush added, "They were lucky."

Historically, George Washington was a contemporary of Catherine II (Catherine the Great), who ruled Russia from 1762 to 1796. Much to General Washington's relief, the Russian empress indirectly helped the colonial cause during the Revolutionary War by refusing George III's requests for assistance and remaining neutral.

Washington wrote to one of his officers in 1779:

"We are not a little pleased to find from good authority, that the solicitations, and offers of the Court of Great Britain to the Empress of Russia, have been rejected with disdain... [She] has motived her Refusal in terms breathing a generous Regard to the rights of mankind."

As president, George Washington appointed a consul to St. Petersburg in 1795 as the first step in establishing diplomatic relations between the United States and Russia, which became official in 1809. Americans who traveled to Russia reported that the name of George Washington was well known there, and their hosts often surprised the Americans by drinking toasts to the health of George Washington.

After his death, Washington's role in the American struggle for independence continued to be admired, and even today, Washington holds a prominent place in Russian books dealing with the history of the United States.