This classic recipe for making whiskey was copied from The American Distiller by Michael Krafft, 1804. 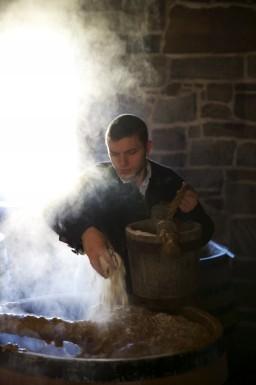 Into each cask or hogshead, throw nine gallons of water heated to ninety degrees of Farenheit’s thermometer, to which add forty pounds of Indian corn meal; agitate the mass briskly, and let it stand two hours, that it may open and prepare the grain for dissolution; now twelve gallons of boiling water are added, and briskly worked with the oar, then suffered to stand fifteen minutes – on the top of this, four gallons of luke-warm water are gently poured, and ten pounds of malt gently worked on the top, so as not to intermix with the corn meal, which is in that state suffered to stand thirty minutes, then fourteen gallons more of boiling water are added to the mass, and worked as before: this in that state is suffered to stand sixty minutes, then forty pounds of rye meal are now added, and worked well, and just as before the whole mass is suffered to stand from two to four hours, in proportion to the state of the weather: the calculation is, when cold water filled to within six inches of the top of the cask, will bring down the whole mass to seventy-five degrees. It is now yeasted … covered … and left until fit for the still."

- The American Distiller, or the Theory and Practice of Distilling by Michael Krafft, 1804.

How Did George Washington Make Whiskey?

Steve Bashore from Mount Vernon walks us, step by step, through the process of making of whiskey, as…