Harrison Dodge is the longest serving superintendent (or equivalent) of George Washington’s Mount Vernon. He was appointed in 1885, when he was in his late twenties, and remained in the position for 52 years.

In fact, Dodge did not choose to retire but died in 1937. During his time, countless changes and improvements were made and he welcomed more than 25 million visitors to the estate.1

Not only did Dodge care for and maintain the property, he also worked to restore it to accurately reflect its appearance during Washington’s life. This included removing some structures and heavily restoring others. One of the buildings removed was the Summer House. It was constructed after Washington’s time and was on top of a dry well, which was in use during Washington’s life. Dodge also oversaw an extensive restoration of the Kitchen Garden, including eliminating the terrace steps, regrading the slope, construction of two ‘dipping wells’ and ‘cold pits’, laying bricks, and planting a wide variety of plants.2 Dodge also noted the color of Washington’s Tomb was painted too bright of a red before his time at Mount Vernon. So with the help of a brickwork expert, linseed oil was applied to darken the bricks.3

Dodge frequently hosted VIPs including US Presidents and their families, royalty, foreign diplomats, and celebrities.

In the early 1900s, Dodge noted the deteriorating condition of the Mansion’s cornerstone which had Lawrence Washington’s insignia on it. The insignia was barely visible and the stone was disintegrating. Dodge removed the stone, restored it, coated it to prevent further water damage, and reinstalled it.4 He also rebuilt the foundation of the Smoke House which had “crumbled with age,” taking special care to follow original building methods and preserve the rest of the structure.5 He also laid brick in many places to replace clay gravel and wooden sidewalks.6

Dodge oversaw the repairs of the Jean-Antoine Houdon’s bust of Washington. In 1785, Houdon visited Washington at Mount Vernon before creating the bust. After its completion, Washington’s family considered it the best representation of him.7 Over the years it suffered considerably and was “cracked on one shoulder and across the chest. The queue had parted and the lobe of the left ear was broken. A slight chip at the tip of the nose added to its disfigurement.”8 In 1908, the bust was restored and is still on view at Mount Vernon. 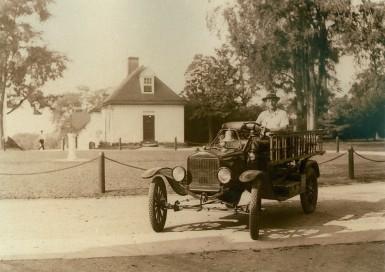 Dodge was especially interested in protecting the Mansion and outbuildings from fire. Until 1916, the interior of the Mansion was lit with kerosene lamps and candles. While there was some concern about the loss of authenticity, it was decided that electric lights were far safer.9 Dodge also began sending his male staff to the School for Firemen in Washington, DC to ensure that, if a fire did break out, they were prepared to fight it.10 In 1923, Dodge noticed Henry Ford and his wife touring Mount Vernon. He immediately introduced himself and gave the Fords a behind the scenes tour. Ford learned that there was not a fire engine at Mount Vernon and upon returning home sent one. Thirteen years later, Ford sent a new model to replace the original.11

Become a Member of Mount Vernon

As a privately funded institution we rely upon people just like you to help keep George Washington's legacy alive. 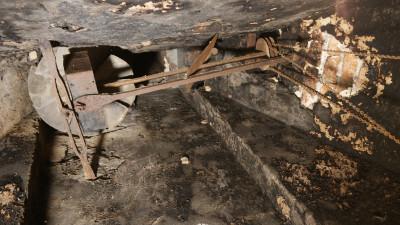 Ford was interested in many things on his visit, especially items related to daily life. He found the smoke jack in the kitchen particularly interesting. Months after his visit, Ford asked Dodge to sketch the smoke jack. Dodge found this rather difficult and instead built Ford a working model.

Dodge kept a diary every year he served as superintendent. The diaries give information on the weather, grounds and restoration work, noteworthy visitors, and attendance.

His diary entries are kept in the collections of the Archives of the Mount Vernon Ladies’ Association today.

The mission of the Mount Vernon Ladies' Association is to preserve, restore, and manage the estate of George Washington to the highest standards and to educate visitors and people throughout the world about the life and legacies of George Washington, so that his example of character and leadership will continue to inform and inspire future generations.