Fire protection and prevention has been a major focus of the Mount Vernon Ladies’ Association since the organization took possession of George Washington’s estate in 1860. 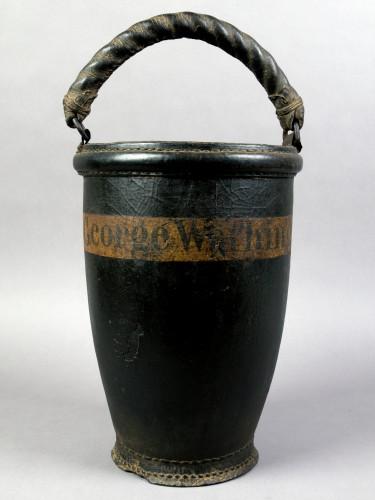 The core of the present-day Mansion was built mainly out of wood for Washington’s father, Augustine Washington, around 1734. The building was then significantly expanded for George Washington in the 1750s and 1770s. Today much of the 18th-century materials remain and preserving it is of the utmost importance.

The most important piece of firefighting equipment from the 17th to early 19th centuries was a leather fire bucket. At Mount Vernon, the buckets stood ready for use in the first-floor servants' hall and they never left the estate. Today, these buckets are powerful reminders of the very serious threat fires were to life and livelihood in the 18th century and still are today. 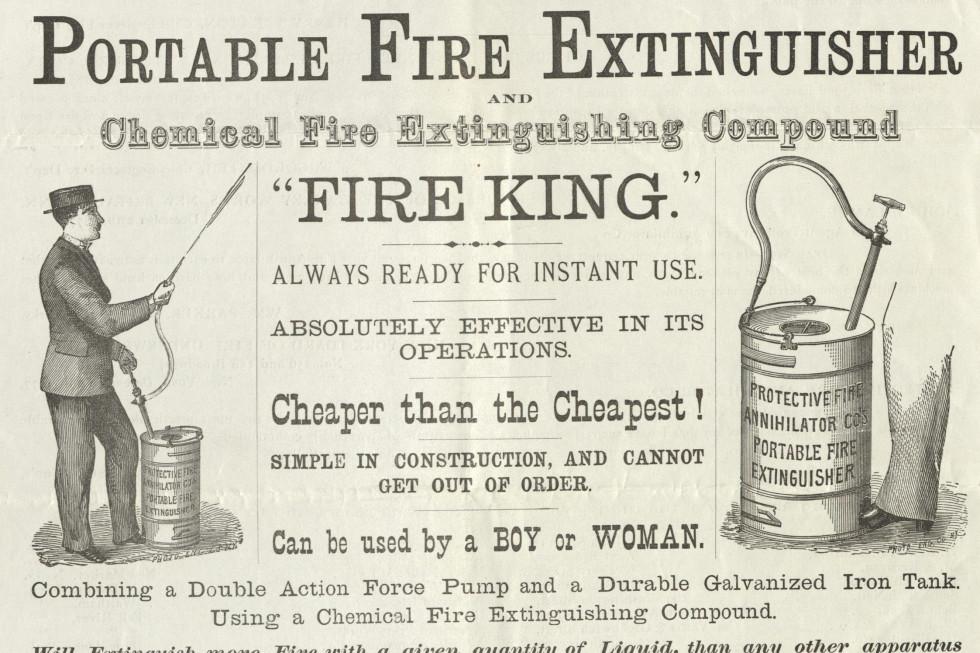 As technology changed so too did Mount Vernon’s fire protection plan. In 1879, the Mount Vernon Ladies’ Association (MVLA) purchased four fire extinguishers like those seen in this advertisement for the “Fire King,” which was manufactured by The Protective Fire Annihilator Company. Mrs. Nancy Wade Halsted, the Vice Regent for New Jersey, stated in her report to Council that year: “After examining four different kinds of Fire Extinguishers, with the advice of Naval Underwriters and other judges, the ‘Protective Fire Annihilator’ was considered the best.”

Then in 1932, Henry Ford donated the organization’s first firetruck. The built-to-order American-LaFrance Combination Chemical and Hose Car arrived at the estate on September 21, 1923. Thirteen years later, Ford replaced the engine with a more advanced model and encouraged the MVLA to form its own fire department, install fire hydrants, and upgrade alarms.

Mount Vernon staff was trained to operate equipment to the highest quality and conducted regular tests of each apparatus. Superintendent Harrison Dodge wrote the short publication “Fire Protection in the Home of Washington,” in the early 1930s detailing Mount Vernon’s efforts. Regent Harriet Clayton Comesgys reported at Council in 1923 that “our guards have been well drilled as firemen,” and “they exercise daily some portion of the fire service and keep that in perfect order, at intervals sounding the alarm to familiarize everyone with that important duty.”

Today the Mount Vernon Fire Department is the estate’s very own emergency response team. Currently, the department receives firetrucks from Fairfax County, Virginia through a mutually beneficial partnership. Twelve members of the Mount Vernon Operations and Maintenance staff serve as firefighters, with some living on-site. Mount Vernon staff relies on professional recommendations and frequently reviews our fire protection procedures to ensure we are consistent with industry standards.

Mount Vernon's experts are always working to protect George Washington's home from a number of threats.