On July 4, 1918 President Woodrow Wilson delivered an address to a large gathering of citizens at the tomb of George Washington on the Mount Vernon estate.

Gentlemen of the Diplomatic Corps and My Fellow Citizens:

I am happy to draw apart with you to this quiet place of old counsel in order to speak a little of the meaning of this day of our nation’s independence. The place seems very still and remote. It is as serene and untouched by the hurry of the world as it was in those great days long ago when General Washington was here and held leisurely conference with the men who were to be associated with him in the creation of a nation. From these gentle slopes they looked out upon the world and saw it whole, saw it with the light of the future upon it, saw it with modern eyes that turned away from a past which men of liberated spirits could no longer endure. It is for that reason that we cannot feel, even here, in the immediate presence of this sacred tomb, that this is a place of death. It was a place of achievement. A great promise that was meant for all mankind was here given plan and reality. The associations by which we are here surrounded are the inspiriting associations of that noble death which is only a glorious consummation. From this green hillside we also ought to be able to see with comprehending eyes the world that lies about us and should conceive anew the purposes that must set men free. 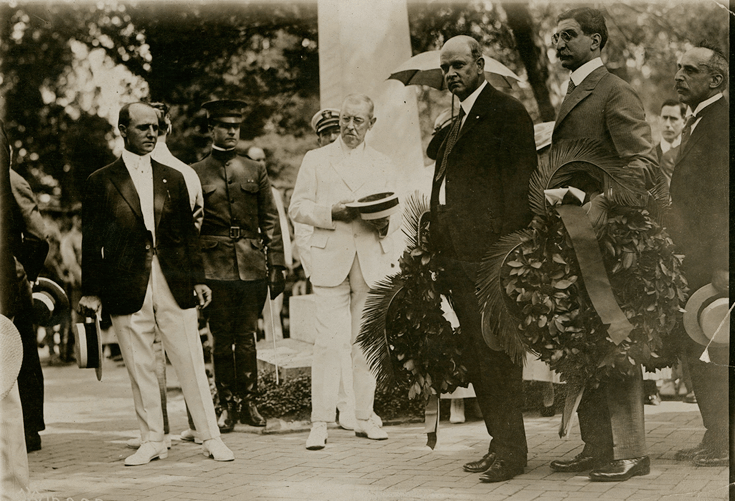 It is significant,—significant of their own character and purpose and of the influences they were setting afoot,—that Washington and his associates, like the barons at Runnymede, spoke and acted, not for a class, but for a people. It has been left for us to see to it that it shall be understood that they spoke and acted, not for a single people only, but for all mankind. They were thinking, not of themselves and of the material interests which centred in the little groups of landholders and merchants and men of affairs with whom they were accustomed to act, in Virginia and the colonies to the north and south of her, but of a people which wished to be done with classes and special interests and the authority of men whom they had not themselves chosen to rule over them. They entertained no private purpose, desired no peculiar privilege. They were consciously planning that men of every class should be free and America a place to which men out of every nation might resort who wished to share with them the rights and privileges of free men. And we take our cue from them,—do we not? We intend what they intended. We here in America believe our participation in this present war to be only the fruitage of what they planted. Our case differs from theirs only in this, that it is our inestimable privilege to concert with men out of every nation what shall make not only the liberties of America secure but the liberties of every other people as well. We are happy in the thought that we are permitted to do what they would have done had they been in our place. There must now be settled once for all what was settled for America in the great age upon whose inspiration we draw to-day. This is surely a fitting place from which calmly to look out upon our task, that we may fortify our spirits for its accomplishment. And this is the appropriate place from which to avow, alike to the friends who look on and to the friends with whom we have the happiness to be associated in action, the faith and purpose with which we act.

This, then, is our conception of the great struggle in which we are engaged. The plot is written plain upon every scene and every act of the supreme tragedy. On the one hand stand the peoples of the world,—not only the peoples actually engaged, but many others also who suffer under mastery but cannot act; peoples of many races and in every part of the world,—the people of stricken Russia still, among the rest, though they are for the moment unorganized and helpless. Opposed to them, masters of many armies, stand an isolated, friendless group of governments who speak no common purpose but only selfish ambitions of their own by which none can profit but themselves, and whose peoples are fuel in their hands; governments which fear their people and yet are for the time their sovereign lords, making every choice for them and disposing of their lives and fortunes as they will, as well as of the lives and fortunes of every people who fall under their power,—governments clothed with the strange trappings and the primitive authority of an age that is altogether alien and hostile to our own. The Past and the Present are in deadly grapple and the peoples of the world are being done to death between them.

I. The destruction of every arbitrary power anywhere that can separately, secretly, and of its single choice disturb the peace of the world; or, if it cannot be presently destroyed, at the least its reduction to virtual impotence.

II. The settlement of every question, whether of territory, of sovereignty, of economic arrangement, or of political relationship, upon the basis of the free acceptance of that settlement by the people immediately concerned, and not upon the basis of the material interest or advantage of any other nation or people which may desire a different settlement for the sake of its own exterior influence or mastery.

III. The consent of all nations to be governed in their conduct towards each other by the same principles of honour and of respect for the common law of civilized society that govern the individual citizens of all modern states in their relations with one another; to the end that all promises and covenants may be sacredly observed, no private plots or conspiracies hatched, no selfish injuries wrought with impunity, and a mutual trust established upon the handsome foundation of a mutual respect for right.

IV. The establishment of an organization of peace which shall make it certain that the combined power of free nations will check every invasion of right and serve to make peace and justice the more secure by affording a definite tribunal of opinion to which all must submit and by which every international readjustment that cannot be amicably agreed upon by the peoples directly concerned shall be sanctioned.

These great objects can be put into a single sentence. What we seek is the reign of law, based upon the consent of the governed and sustained by the organized opinion of mankind.

These great ends can not be achieved by debating and seeking to reconcile and accommodate what statesmen may wish, with their projects for balances of power and of national opportunity. They can be realized only by the determination of what the thinking peoples of the world desire, with their longing hope for justice and for social freedom and opportunity.

I can fancy that the air of this place carries the accents of such principles with a peculiar kindness. Here were started forces which the great nation against which they were primarily directed at first regarded as a revolt against its rightful authority but which it has long since seen to have been a step in the liberation of its own people as well as of the people of the United States; and I stand here now to speak,—speak proudly and with confident hope,—of the spread of this revolt, this liberation, to the great stage of the world itself! The blinded rulers of Prussia have roused forces they knew little of,—forces which, once roused, can never be crushed to earth again; for they have at their heart an inspiration and a purpose which are deathless and of the very stuff of triumph!

World War One at Mount Vernon