Fashioned between 1796 and Martha’s death in 1802, this delicate silk embroidery portrays an Indian blackbuck, a species of antelope native to India, Nepal, and Pakistan.

The picture exemplifies a rare, challenging technique of embroidery called “printwork,” in which very fine black silk thread stitched on a white silk fabric imitates the dots and lines of an engraving. The tiny stitches required a high degree of control and accuracy, showcasing Martha Washington’s exceptional skill and artistry.

George Washington’s 1799 probate inventory lists an embroidered, gilt-framed “likeness of a Deer” as having hung in the Mansion’s little parlor. This description posed a puzzle, however, as the beast’s long, twisted horns clearly differ from the antlers seen on more familiar American and European deer. Working with natural history colleagues solved the mystery, identifying the source of the image as a French print of an Indian blackbuck, an exotic species exhibited in the French royal menagerie. Artist Jean-Baptiste Oudry painted this specimen in 1739, while serving as court painter to Louis XV.

The return of an object of such unusual style and substance deepens our understanding of Martha Washington. Notably, her surviving needlework represents a larger body of work than is known for any other 18th-century woman in Virginia or elsewhere in the South. The French taste evident in this work embroidery aligns with the Washingtons’ acquisition in the 1780s and 1790s of other fashionable French items, including furniture, ceramics, silver, and lighting.

Preserved by generations of the Custis and Peter families, the Indian Blackbuck appeared on exhibit at Mount Vernon in 2015 as a loan, before returning home permanently more than 200 years after its completion. The picture survives in its original gilt frame, with a hand-written inscription on the backing that traces it to Mrs. Washington. 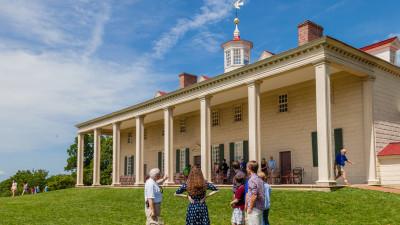