Discovered in 1948 and excavated in the 1990s, South Grove Midden served as the primary site of Washington household related refuse in the decades before the Revolutionary War. 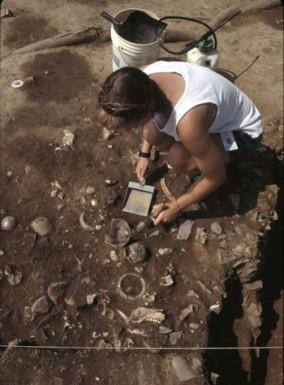 The artifacts recovered from the archaeological excavation of the large trash pile, or midden, in the South Grove were deposited during the Washington family’s tenure at Mount Vernon. The largest concentration of trash dates from ca. 1735 – 1765 and therefore represents objects discarded by a young George Washington, his half-brother Lawrence, and their father Augustine, and their respective households. After 1765, trash was still discarded in the South Grove, but over the next several decades the Grove was transformed from a utilitarian workspace into a more formal landscaped corner of the yard.

Until the late 19th century it was common for trash to be discarded close to where it was generated and archaeologists know to look for these rich middens near kitchens and houses. The broken objects discarded by people in the past, including the Washington family, provide important clues about diet and everyday life. In the South Grove, we think enslaved people who worked in the kitchen and Mansion discarded trash into a large depression in the yard. The depression was gently sloping and might have formed when a large tree fell down. We don’t think the garbage was shielded from the Mansion in any way and the archaeological excavations discovered no evidence that it was purposefully covered over. Yes, it smelled and probably attracted scavengers and bugs – but this was common and George and Martha Washington would not have thought it strange to have a dump near their home – that’s just how life was. 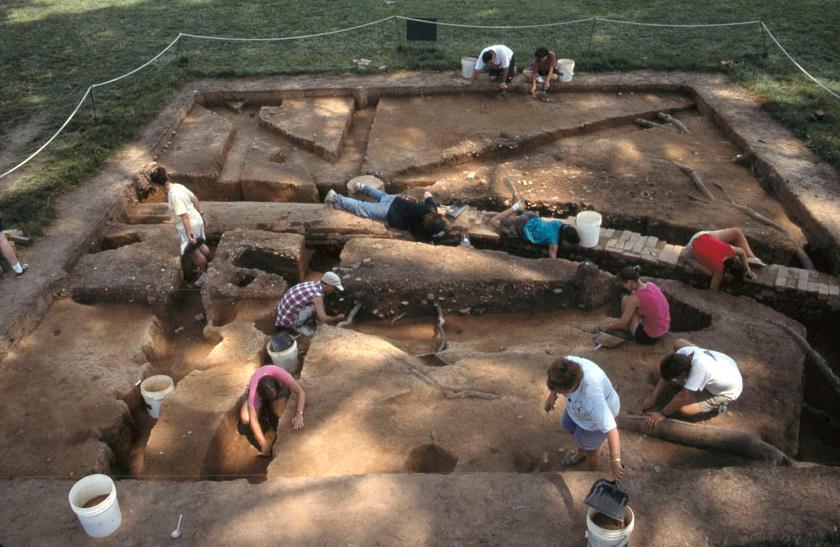 Whose Trash Is It?

George Washington’s great-grandfather John Washington patented (or bought) the property that was to become Mount Vernon in 1674. We don’t think John ever lived on the property, and we don’t know the locations of the homes of the tenants who rented the property during these years.

Upon Augustine’s death in 1743, Little Hunting Creek plantation was willed to Lawrence who lived there with his wife, Anne Fairfax. Lawrence renamed the plantation Mount Vernon, after Admiral Edward Vernon, his commander in the British navy. Lawrence and Anne occupied the plantation until his death in 1752. Anne Fairfax and her second husband leased the property to George Washington beginning in late-1754. George Washington started his own family in 1759 with his marriage to Martha Dandridge Custis.

Beginning in 1775, George Washington began a major reorganization of his plantation. He tore down the outbuildings he had inherited from Lawrence and built most of the outbuildings we know today, including a new kitchen southwest of the Mansion. Additionally, he instructed his plantation manager to plant the area south of the house with “all the clever kind of Trees (especially flowering ones) that can be got, such as Crab apple, Poplar, Dogwood, Sasafras, Laurel, Willow (especially yellow and Weeping Willow…)…, these to be interspersed here and there with ever greens such as Holly, Pine, and Cedar, also Ivy; to these may be added the Wild flowering Shrubs of the larger kind, such as the fringe Tree…”

This transformed the plantation into the landscape we know today. Wings on both ends of the house made it much longer, bringing the southern end closer to the South Grove. Additionally, the layout of Lawrence’s outbuildings was in a “V” shape, while the newer ones were in a “U” pattern. This is important because this new pattern brought the kitchen closer to the midden. 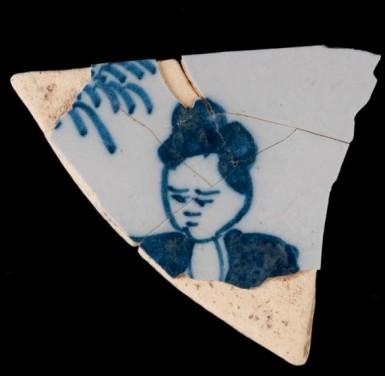 About the time of this reorganization, the midden stopped being used as the main dump for the Kitchen and Mansion trash. Enslaved people continued to discard food remains, broken items and fireplace ashes at this spot, but not in the same volume as before. Perhaps they moved to another midden in the Grove, at least two additional discrete middens are thought to have existed in the vicinity of the south grove, including one dug up in 1948 when a tree was planted in the lawn. Through time grass grew over the trash and when archaeological excavations began there in 1990 there was no evidence of the many artifacts left behind during George Washington’s life.