Have you ever seen a view of Mount Vernon from the west gate? Chances are that you have not (though it is the best view of the Mansion's west front), but if you came to visit the Washingtons in the late 18th century or came to honor George Washington in the 19th century, this would have been your first glimpse of the Mansion and grounds. During the month of April 2007, we excavated four test units in and around the foundations of the north and south porters’ lodges. These are the two small white buildings flanking either side of the original land entrance to Mount Vernon located today on Old Mount Vernon Road.

The 12 x 14 foot porters’ lodges were not actually there during George Washington’s lifetime. They are later additions to the estate built by Bushrod Washington (nephew of George Washington and proprietor of Mount Vernon from 1802 until his death in 1829) in 1812. These were no ordinary brick buildings, but instead were constructed of pise or rammed earth. Pise buildings are made of clay walls, sometimes tempered with sand. Bushrod Washington built a few other pise structures at Mount Vernon including a barn, greenhouse, icehouse, and cow food boiler, the foundations of which are made of sandstone.

Occupation of these porters’ lodges is first recorded by Elbridge Gerry, Jr., a visitor in 1813, “A mile this side of the house you enter a gate, on each side of which is a small neat white house, for the porter, an old Negro.” Later, other visitors wrote about how the lodge inhabitants opened the gate and received coins for their work. The porter is usually identified as an elder black man, though in 1834, a female slave is mentioned, suggesting a family living at the west gate.

Benson Lossing’s account of his visit to Mount Vernon in 1858 details the decayed nature of the estate and also perpetuates the idea that the porters’ lodges were, in fact, George Washington-era buildings. The Ladies’ Association reconstructed the buildings with brick under this assumption in 1876. The Ladies undertook restoration work to the buildings in subsequent years including a new roof of hand-rived cypress shingles in 1945.

Today the buildings’ walls are cracking and bulging and the interior of the south lodge is in poor condition. The purpose of this excavation was to answer both archaeological and restoration questions. Archaeologically, we hoped to discover if there was any remnant sandstone foundation associated with the original pise (or rammed earth) construction commissioned by Bushrod Washington or had subsequent rebuilding erased evidence of this original construction. Secondly, we also hoped to determine if any old topsoil or living surface strata associated with the 19th century occupation of the two structures survived. If so, we would need to plan the restoration work to do minimal damage to these archaeological deposits. The restoration staff wanted to view the foundations to see the extent of the structural issues and plan how best to fix the foundations.

Summary of our Findings

We excavated two units on the exterior south side of the north porters’ lodge. Just below topsoil, surrounding this building and the south porters’ lodge, is a two foot wide brick pad. This brick surface may have acted as a gutter to run rain water away from the buildings’ foundations. Also, just below topsoil, the brick construction of the lodge wall changes to sandstone foundations that are probably associated with the earliest construction of the lodge in 1812. From the minimal testing done around the north lodge, other than the trench dug to build the foundations, it does not appear that there are any 19th century domestic deposits, or cultural layers. The evidence for 19th century deposits and features is stronger outside the south porters’ lodge. Again, a narrow brick surface was encountered surrounding the lodge and the sandstone foundations were uncovered below the brick layer. Archaeologists excavated layers containing domestic artifacts, such as bone buttons, horseshoes, pearlware, and whiteware, that overlaid the builders’ trench for the original sandstone foundation and a posthole and mold located just north of the northeast corner of the lodge. It is possible that this is an earlier generation fence post for the west gate.

In the posthole, we found a 1780s Spanish half real coin. The front face, or portrait side, of a coin is called the obverse. The portrait on this coin is hard to make out, but along the sides it is possible to read, “CAROLUS•III.” After the king’s name are the words, “DEI•GRATIA,” which are short for, “by the grace of god.” Charles the third was king of Spain until Dec. 1788. The date is hard to read but is either 1780, 1786, or 1788. 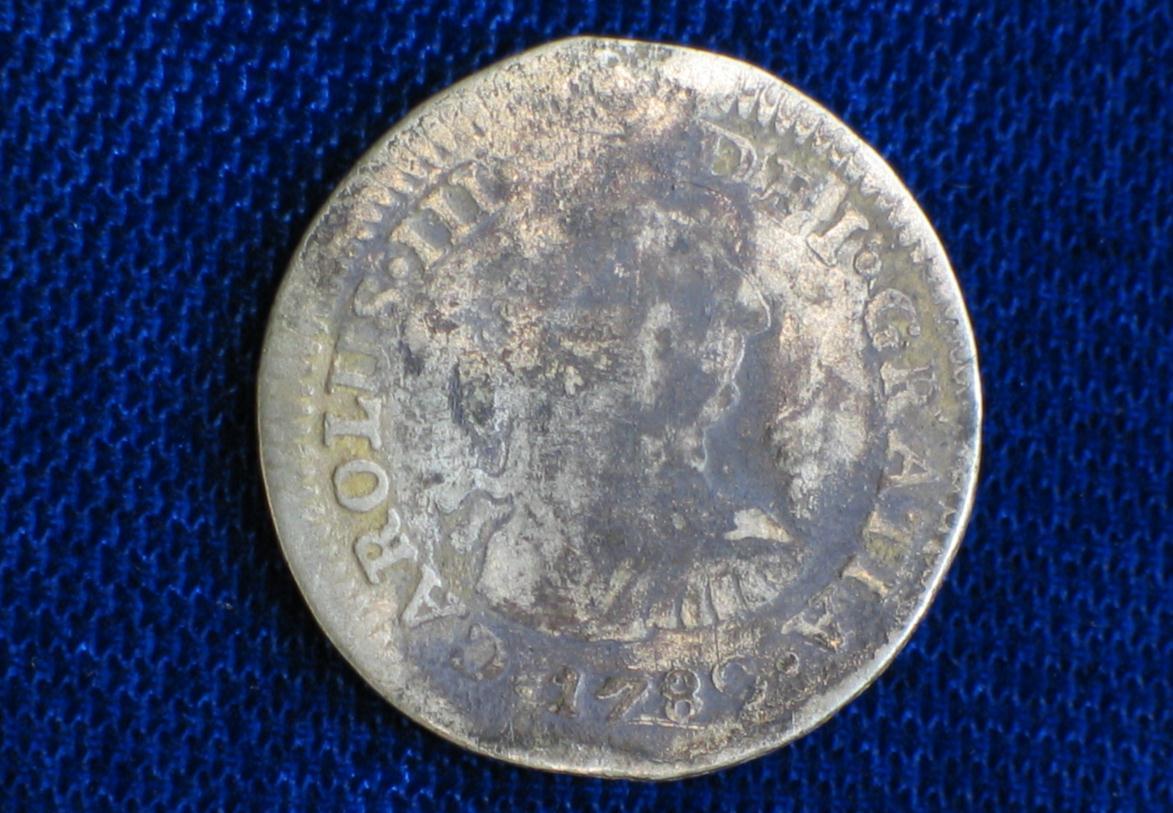 On the reverse is a mint mark with capital M that has a little circle above it. This is the symbol for the Mexico City Mint. The Assayer of this coin is Antonio Forcada y Plaza, and you can tell because his mark, F F, is present after the mint mark. There are also the words, “Hispan•ET IND,” which is short for, “King of Spain and of the Indies.”

One more characteristic of this coin is the graining that is visible around the edges on both sides. This technique was used in order to help prevent coins from being split, or even quartered, for small purchases. Many examples of cut coins are found throughout the colonies, and graining was no guarantee that it would maintain its integrity.

We excavated a unit inside the south lodge in the southeast corner. The most significant conclusions from this small unit were that there are cultural deposits under the floor boards of the south porters’ lodge, and that the sandstone foundation is much deeper than seen in other units and is wider than the brick walls that sit on top of it. The foundation nearly doubles in size from the top to the bottom courses (from about ½’ to 1’). The stones are mortared. This supports our hypothesis that the sandstone foundation is a remnant of the 1812 pise structure.

We discovered that the foundations were in good condition and the cracking and bulging are not caused by failings in the foundation. We concluded that further excavations were not necessary because the restoration will not entail digging to expose the foundations. The brick walls will be repointed from just below the present grade.

The evidence, though minimal, suggests that the sandstone foundations are the originals built in 1812 and that soils outside of the south lodge have 19th century deposits that could provide details about the people who occupied the dwellings and how the west gate changed over time. This needs further testing around the north lodge if future work disturbs the ground around that building.