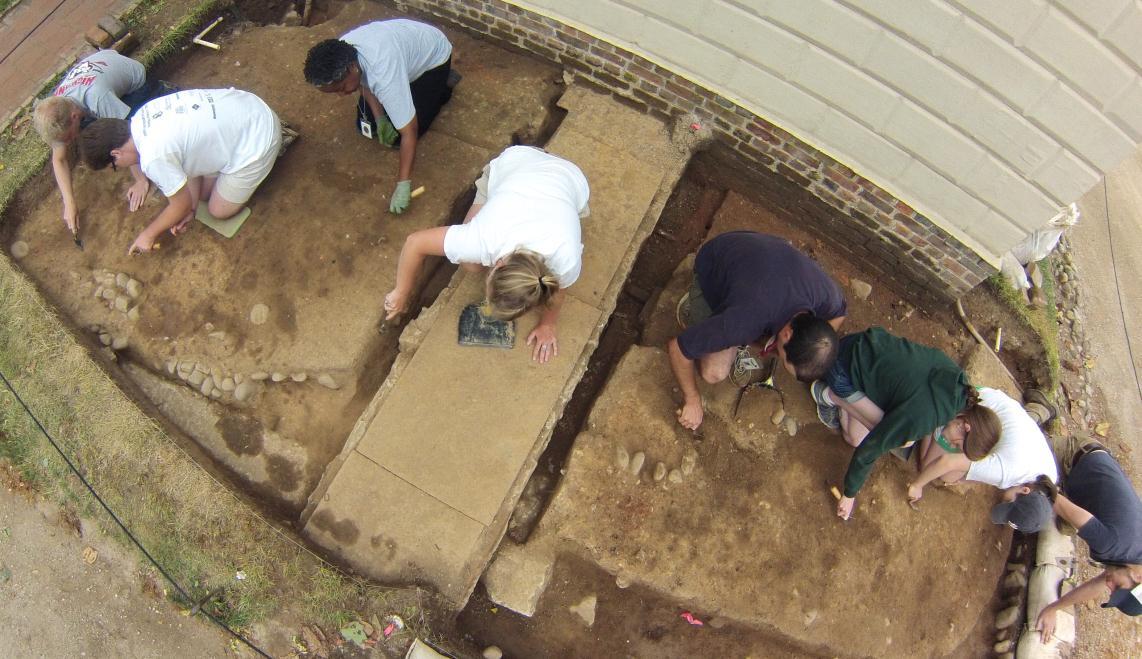 Archaeology is the scientific study of past human cultures through the excavation and examination of material remains (sites, features, soils, and artifacts). Our discipline has developed a set of methods to find, identify, and excavate sites to inform us about the past. Typically, we receive training in these methods by participating in an archaeological field school. Here students actually perform excavations and process artifacts, participate in readings and discussions, and visit other archaeological sites. Visitors to our sites often ask: what are we finding; how do we know when we have found something; and how to we figure out how far back in time we have dug? The answers to these questions lies in artifact analysis, research, soil processing, and dating methods.

An Example of TPQ and Seriation Analysis

Terminus Post Quem or TPQ analysis is a way to date layers of soil by identifying the most recent artifact from that stratum. For example, say you dug a layer of soil and the following artifacts were unearthed: a white salt glazed stoneware ceramic sherd (1720); a machine cut nail (1790); and a Styrofoam cup fragment (1962). The dates listed are the earliest possible date of manufacture for that artifact. By looking at the dates, you know this layer contains artifacts from the 18th and 20th centuries. The presence of the Styrofoam cup tells archaeologists that this layer could not have been deposited before 1962, when this synthetic material was first produced. The layer could have been deposited anytime after 1962, but not before.

Not all artifacts are deposited at the same frequency in each layer. For example, five successive layers of soil may have various amounts of machine-cut nails, say -- 2, 5, 20, 15, 1 -- from the bottom layer to top. Now, this may simply reflect random use and discard of machine-cut nails BUT it might indicate a change in past behavior that has created a meaningful pattern. Our job as archaeologists is to see if we can detect a meaningful pattern. Seriation is a way to look at the changing frequency of artifacts deposited in the layers of soil allowing these meaningful patterns to be found. If we convert the numbers of nails to percents and arrange them in stratigraphic order on a graph, we arrive at a standard seriation curve. Stratigraphic order means the sequence in which the layers were deposited, or the earliest layer is on the bottom and the most recent layer is on the top.

If we were to identify TPQ dates for the different layers, a hypothesis of deposition can be formed (Figure 1). Say Layer E has a date of 1800, Layer C has a date of 1835, and Layer A has a date of 1885. We already know that machine-cut nails have a TPQ 1790. By performing research into changing nail technologies, we know that cut nails replace earlier hand-wrought nails around 1790. Additionally, wire nails become common on archaeological sites around 1885. In Layer E, the low cut nail count could relate to the initial use of wire nails. The nails are most frequency used and discarded in Layer C, but decrease in frequency from here up to Layer A (or from 1835 through 1885). Therefore, the change in frequency of cut nail deposition could reflect the changes in nail production technology in the 19th century. Though this is a simplistic view of site analysis, it shows one example of the combined use of TPQ and seriation analysis combined with documentary evidence. Click here to explore how these analytical methods helped us figure out whose trash was in the South Grove.

What do we do with dirt?

Many visitors ask, are you making mud pies? I must admit, some days it feels like that! However, we do go through multiple processes to recover everything from the largest artifacts to microscopic plant and chemical remains. Below is a description of each process including: dry screening; water screening; flotation; soil sampling; and pollen/phytolith sampling. We do not perform each processing method on every layer we excavate. For most layers, we dry screen the soil and take a soil sample. If the layer is deemed significant in some way (for example, it is the fill of a feature or deposited during a significant time period), we perform a combination or sometimes all of the processes to recover the most information from that layer.

The most often used method for processing soil is to dry screen it through wire mesh. Where there are archaeologists excavating, there will always be a screen for finding artifacts. The process is technologically simple – all dirt excavated from a soil layer is collected in a dust pan, placed into a bucket, and dumped into a wire mesh screen (or simply shoveled directly into the screen). The dirt falls through the holes in the mesh and any artifacts left behind are collected in the screen. These artifacts are bagged by provenience and taken back to the lab to be washed, labeled, and identified. We use the 3/8” mesh for 20th-century deposits and the ¼” mesh for 18th- and 19th-century deposits.

Certain layers of soil require a more thorough process to find smaller and / or more fragile artifacts contained within them. One process is called water screening and uses water to liquefy the soil so it can flow first through a ¼” mesh screen and then through a 1/16th” screen. This allows for complete recovery of everything in the soil that is 1/16th” and larger. Water is also gentler than pushing dirt through with your hand so fragile items like charcoal, seeds and bones survive better with this method. We water screened soil from a trash pit located in the Upper Garden, the fill in the House for Families cellar, and the midden in the South Grove. At these sites, water screening recovered tons of tiny fish and rodent bones, ceramic sherds, beads, lead shot, and seeds that would have otherwise fallen through the larger mesh screen.

The process of flotation occurs in a machine called the Flote-tech that looks like a hot dog cart and operates as a Jacuzzi for dirt. A soil sample collected from an archaeological stratum, or layer, is placed in water, agitated, and filtered through a fine screen leaving behind both a light fraction (items that float to the top such as bits of charcoal, tiny bones or charred seeds) and a heavy fraction (items that do not float and are too large to pass through the screen such as brick or ceramic fragments). The sediment (the remainder of the dirt without artifacts) settles to the bottom of the machine. We do not float all the dirt from a stratum, but instead take a sample (usually two large plastic bags worth). This provides a representative sample of the very small and light weight artifacts contained in the layer.

Flotation provides archaeologists with insights into people's diet and gardening and agricultural practices, as well as information on past environmental conditions. Such remains can only be recovered through flotation, because they pass through the larger screens we use in the field. For example, at the site of Washington’s distillery, we found charred corn kernels and bits of wood that once lined the trough running under the floor in the light fraction. This allowed us to find evidence of the ingredients that were distilled to make whiskey. We were also able to identify the type of wood (pine) that lined the trough. At the House for Families, tiny seeds are evidence of plants the slaves grew in their gardens, like beans, and what they gathered in the woods, like persimmons and walnuts.

We take a 6 x 6” bag full of dirt from every stratum excavated at Mount Vernon. These samples are sent to a specialized laboratory that uses high tech methods to identify chemicals in the soil. Soil chemical analysis is an important way to understand past activities that occurred in different locations within a site. For example, a high level of phosphorous in the soil might indicate a midden or refuse area. We do not get all soil samples processed, but we do save them all in case a future archaeologist has research questions that can be answer through soil chemic analysis.

Everyone knows what pollen is because it makes us sneeze – it’s the grains produced by trees and other plants to cause reproduction. These grains actually survive in the dirt in certain circumstances and can allow archaeologists to understand, for example, if the past environment was a dominated by deciduous or evergreen trees. In the case of a garden excavation, certain pollens from planting beds might indicate the flowers or bushes that grew there.

Phytoliths are microscopic silica bodies created by plants, especially grasses and cereals. These develop as the plant grows and are durable enough to survive in the archaeological record for a long time. Each plant species has a distinct phytolith signature. When viewed under a microscope, a specialist can identify the type of plant based upon this signature.

At the Repository for Dung, we found grass phytoliths preserved in the very lowest layers of soil – dark, organic soil around the cobblestone floor. We think this dark soil represents horse dung, discarded in the building to make fertilizer. The grass phytoliths we found are evidence that Washington’s horses feasted on grasses rather than grains.

Historic pollens and phytoliths can be preserved in the ground for thousands of years and can provide the best evidence for what was in the general and immediate past environment. Only a specialist can find and identify pollen and phytoliths from a soil sample; therefore, these need to be sent out to an archaeobotanist with proper training. Because a chance exists of contaminating a historic sample, caution must be taken to reduce these risks by cleaning the sampling trowel with distilled water before collecting the soil.