As with many of Virginia’s major colonial-period plantations, Mount Vernon has been the subject of repeated archaeological investigations. The earliest of these were carried out in the 1930s, a period of extensive research and restoration, with other investigations conducted over the next half-century. 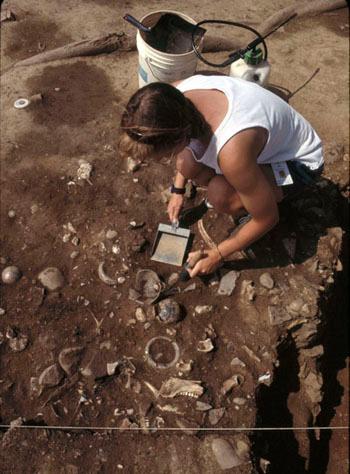 In 1984, the Mount Vernon Ladies' Association (MVLA) contracted with the Virginia Division of Historic Landmarks to conduct a two-year overall survey of the property, and to test a number of areas of special interest. As a result of the findings, in 1987 the MVLA established its own permanent archaeology program.

The program is charged with the long-term study of Mount Vernon, with the results to be incorporated into the MVLA’s ongoing restoration, educational, and interpretive efforts. Archaeological investigations are viewed as an integral component of the continuing research. Despite being one of the most completely documented historic properties anywhere, many questions remain unanswered about the evolution of the property and many aspects of plantation life.

Williams carried out a number of restoration projects and conducted excavations as part of an overall study of the layout of the plantation.

In 1931, Williams came to Mount Vernon to conduct research as part of a larger study of southern gardens and grounds. He undertook this research while a member of the faculty at Harvard University. Williams worked on the project over the succeeding several summers between 1931 and 1936 and excavated a number of sites on the estate.

In 1936 Williams was hired as Director of Research and Restoration at Mount Vernon. A position he held until 1939.

Pioneering a New Field of Study

Williams’ archaeological work reflected both his lack of specialized training—he was a landscape architect with a background in engineering—as well as the infancy of the field of historical archaeology.

As was usually the case during this period, Williams focused on uncovering building foundations and other structural remains, such as garden wall footings, and did not understand the importance of artifacts. On the other hand, and to his credit, he is unusual for this period. Williams recorded his work through numerous photographs and meticulously rendered plans and cross-sections.

Looking Back at the Vaughan Plan

The Vaughan Plan of 1787 served as Williams’s primary guide in selecting areas for investigation. He was successful in revealing evidence for several structures shown on the plan that no longer survive above ground, including the blacksmith shop in the north grove and a dung repository.

In addition, he uncovered four foundations for earlier outbuildings that were torn down and replaced by George Washington in 1775. Williams also carried out excavations in association with the restoration of the stable, ice house on the east lawn, and smoke house. Finally, he revealed evidence for the garden plan established by George Washington in the 1760s–1770s which was replaced with by the Vaughan Plan in 1787. This included brick wall footings, gates, ha-ha walls, and cobble roads.

Williams carried out numerous restorations that remain largely intact, as well as generating a significant body of archaeological information. The archaeological results along with documentary research still provides extremely important evidence about the evolution of the Mount Vernon’s gardens and grounds. 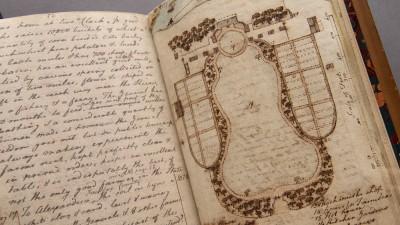 From the Collections: Samuel Vaughan's Journal

Vaughan, a wealthy English merchant, visited Mount Vernon in August 1787. His journal contains a written description of the estate as well as the earliest-known sketch of the Mansion, gardens, and outbuildings. These accounts make it an exceptionally valuable resource in the ongoing restoration of Mount Vernon.

Walter Macomber was an architectural historian who had worked for the Colonial Williamsburg Foundation before coming to Mount Vernon as a consultant. He took over the research begun by Williams that ultimately would lead to the reconstruction of the greenhouse-slave quarters in 1950–1951. Macomber conducted excavations and discovered the foundation of the original structure. The structure was completed in 1793 and burned down in 1835. Its reconstruction long had been a goal of the MVLA.

While the greenhouse-slave quarters reconstruction was by far the largest project Macomber was involved in at Mount Vernon, he did direct numerous other studies, many of which included excavation.

Macomber also excavated at the site of the blacksmith shop in the north grove (as had Williams), in hopes of retrieving data sufficient for the structure’s reconstruction. However, it was decided not to reconstruct the shop at the time. Macomber also directed the restoration of numerous walls, the necessaries, and other smaller projects.

1950s photograph of the newly reconstructed greenhouse-slave quarters which was destroyed by fire in the 19th century. (MVLA) 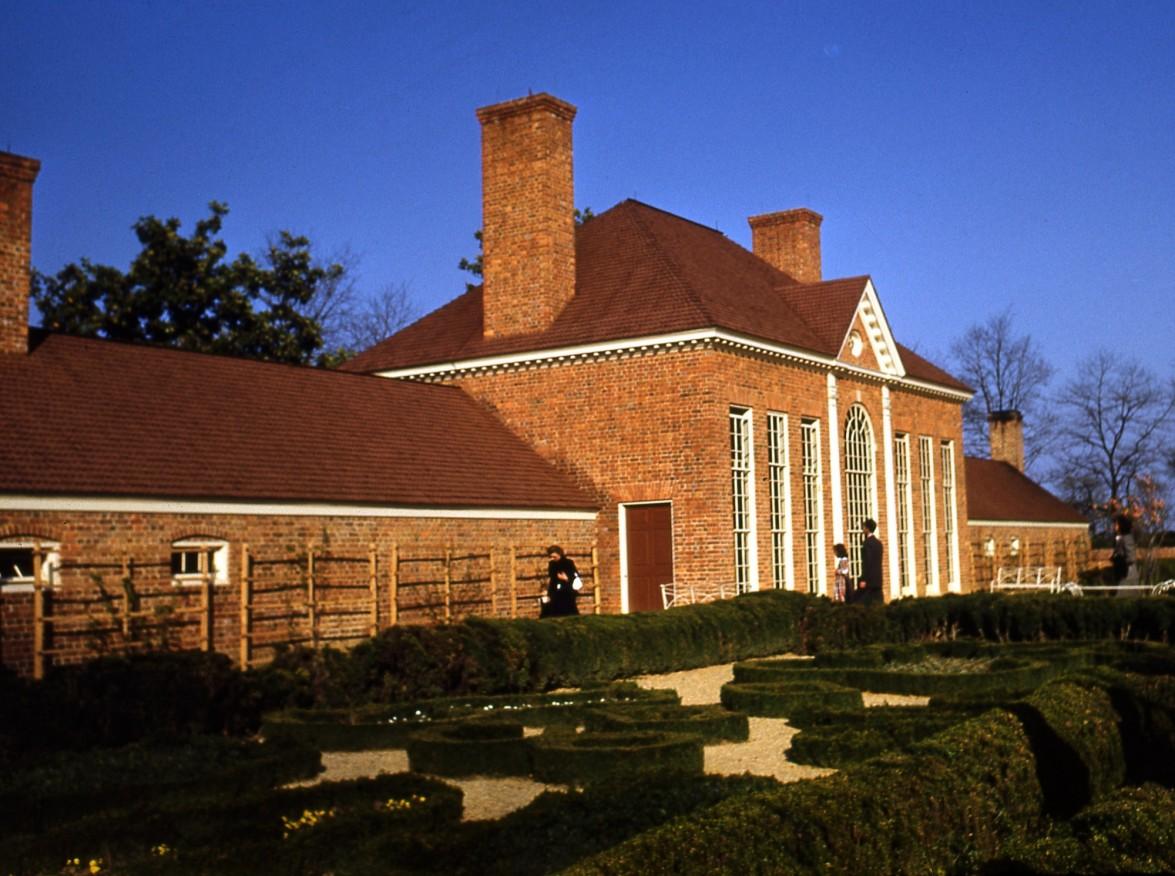 The Virginia Division of Historic Landmarks (VDHL) was contracted to carry out an archaeological survey of the entire Mount Vernon estate and to prepare a site inventory and assessment of the property’s archaeological resources. As part of that project, all the miscellaneous artifacts that had been collected over the years were catalogued.

The area was subjected to a remote sensing (ground penetrating radar and infrared photography), which revealed numerous potential archaeological sites. More than 30 archaeological sites were discovered on the estate, including almost 20 from the prehistoric period. Limited test excavations were undertaken as part of this program. The major foci were the blacksmith shop site in the north grove and a cellar believed to be associated with the House for Families slave quarter, circa 1760 to 1793.

Excavation at the Blacksmith Shop Site

The excavations at the blacksmith shop site were expanded during the second year of the study. The area was found to contain numerous features and large quantities of artifacts attributable to blacksmithing operation. Unfortunately, the site was found to be extensively disturbed due to the construction of an icehouse there in the 19th century, numerous utilities, and earlier archaeological investigations.

The slave quarter cellar proved to be an extremely rich deposit, yielding more than 24,000 faunal elements, in addition to a wide range of other domestic materials.

End of Contract and an Uncertain Future

The contract with the VDHL was completed at the end of 1985. Three of the survey crew were hired to carry the excavations and artifact processing to a point where the archaeology program could be placed on hold until the Association decided on the future of archaeology at Mount Vernon.

In 1986, the Mount Vernon Ladies' Association concluded based on the VDHL survey a permanent Archaeology Department should be established. This Department was envisioned as an integral component of the Association’s ongoing research program, with the initial funding provided by Mrs. Clifton W. Bockstoce, Vice-Regent from Connecticut.

Since the formation of the program in 1987 many projects have been undertaken, including the laundry yard, vineyard inclosure, south grove midden, dung repository, Bushrod pisé barn/carpenter’s shop, upper garden, servant’s hall, and kitchen. The department has also aided in many modern construction projects.

The distillery excavations began in the summer of 1999. The east and south stone walls were exposed along with numerous cultural features associated with the structure’s usage as a commercial distillery. The building’s reconstruction was completed in 2006.

Beginning in the summer of 2014, Mount Vernon archaeologists embarked on a multi-year archaeological survey of the Slave Cemetery located on the estate. The primary goal of this survey is to locate and map each individual grave plot on the landscape in an effort to further research the enslaved community as well as to enable better management of the cemetery. As of the close of the 2016 field season, archaeologists have uncovered 62 burials. Work will continue for an estimated 3-4 field seasons.

Despite the volumes of papers and letters that George Washington kept, we know very little about the this sacred wooded area.