Livestock manager Lisa Pregent is bringing back animals even George Washington might recognize.

By Cara Parks, reprinted with permission

Almost anyone can recite George Washington’s accomplishments: first commander in chief and first President. Some of us may recall that he presided over the Constitutional Convention. Few know the honorific that Washington—who once said, “I had rather be on my farm than be emperor of the world”—may have been most proud of: father of the American mule.

Washington took his husbandry seriously. At his farm at Mount Vernon, he sought out the best livestock, not only for his own account but also to build better breeds for the young nation. In a 1788 letter to agriculturalist Arthur Young, he wrote: “For the multiplication of useful animals is a common blessing to mankind,” adding about the prime mules he received from Spain: “I hope to secure a race of extraordinary goodness, which will stock the Country.” 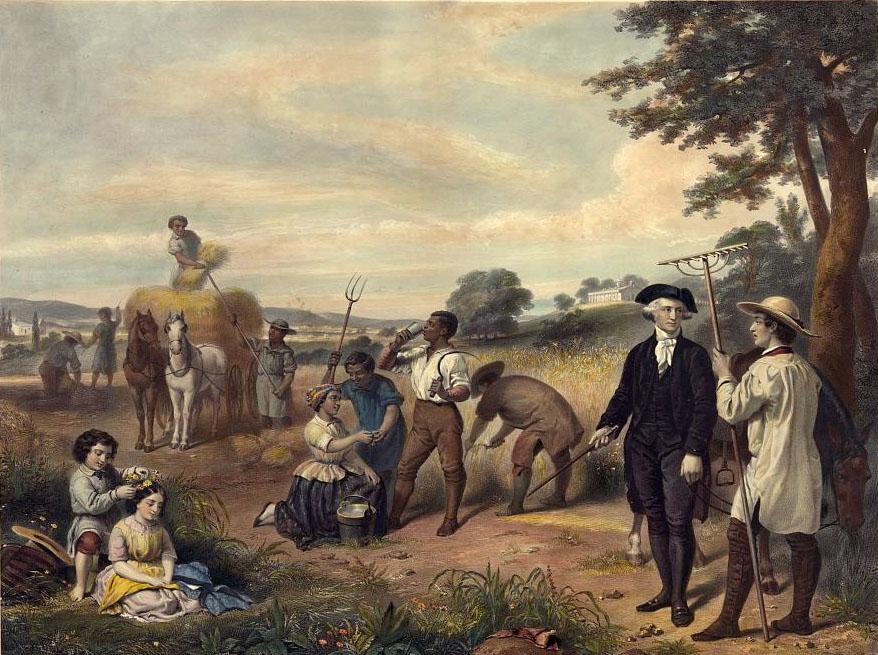 Pregent has occupied George Washington’s former haunts her entire adult life. She grew up nearby in a part of Alexandria once owned by Washington—he called it Union Farm, one of five farms that once made up the Founding Father’s estate. Pregent attended Mount Vernon High School and began volunteering at the farm while still a student there. Today she oversees sheep, hogs, chickens, turkeys, and cattle that Washington himself might recognize but that have not, as he hoped, survived as foundations of the nation’s agriculture. Nearly all are endangered breeds fighting for their very existence.

When I first visit Pregent on a cold day in early spring, it’s lambing season. Pregent, whose workday generally stretches from dawn to late afternoon, has been working all hours as soon-to-be-mothers labor into the evening. Many lambs have already been born, adorable fleece balls romping through the sheep pens.

Roscoe, a 2½-week-old Hog Island lamb whose mother died, is being raised by the livestock staff, who take turns bringing him home at night. One of nearly 100 Hog Island sheep on the estate, Roscoe has mottled black-and-white fleece that will eventually turn all white. Two budding horns emerge near his ears. Unlike some sheep breeds, for whom horns are a definite trait, Hog Islands have them “like having brown or blond hair,” Pregent says.

The livestock farm centers on a small cluster of buildings on a hill just beyond the area intended for public viewing at Mount Vernon. Pregent’s office, surrounded by animal stalls, is a ramshackle affair, complete with a beautiful tabby named Johnny climbing onto chairs and laps. But next door, a tack room is pin-neat, each bridle and saddle carefully conditioned and in its proper place. Walking through the stalls, Pregent is trailed closely by Roscoe, who insistently nuzzles her hand. “Roscoe!” she says. “I swear you’re like a cat.”

“I was a typical little girl—I loved horses,” she tells me. “But when I started here, I fell in love with the sheep. They have wonderful personalities, when you take the time to get to know them.”

The Hog Island sheep were chosen for their similarity to George Washington’s original flock, based on his own descriptions of a small breed that, among other traits, produced about three to five pounds of wool each. “They were native to Virginia and extremely endangered, so we figured that’s where we should focus,” Pregent says.

The Hog Island sheep take their name from a barrier island off Virginia’s Eastern Shore, on which they lived—mostly feral—for centuries, isolated from genetic influences that have created the sheep most people recognize today. 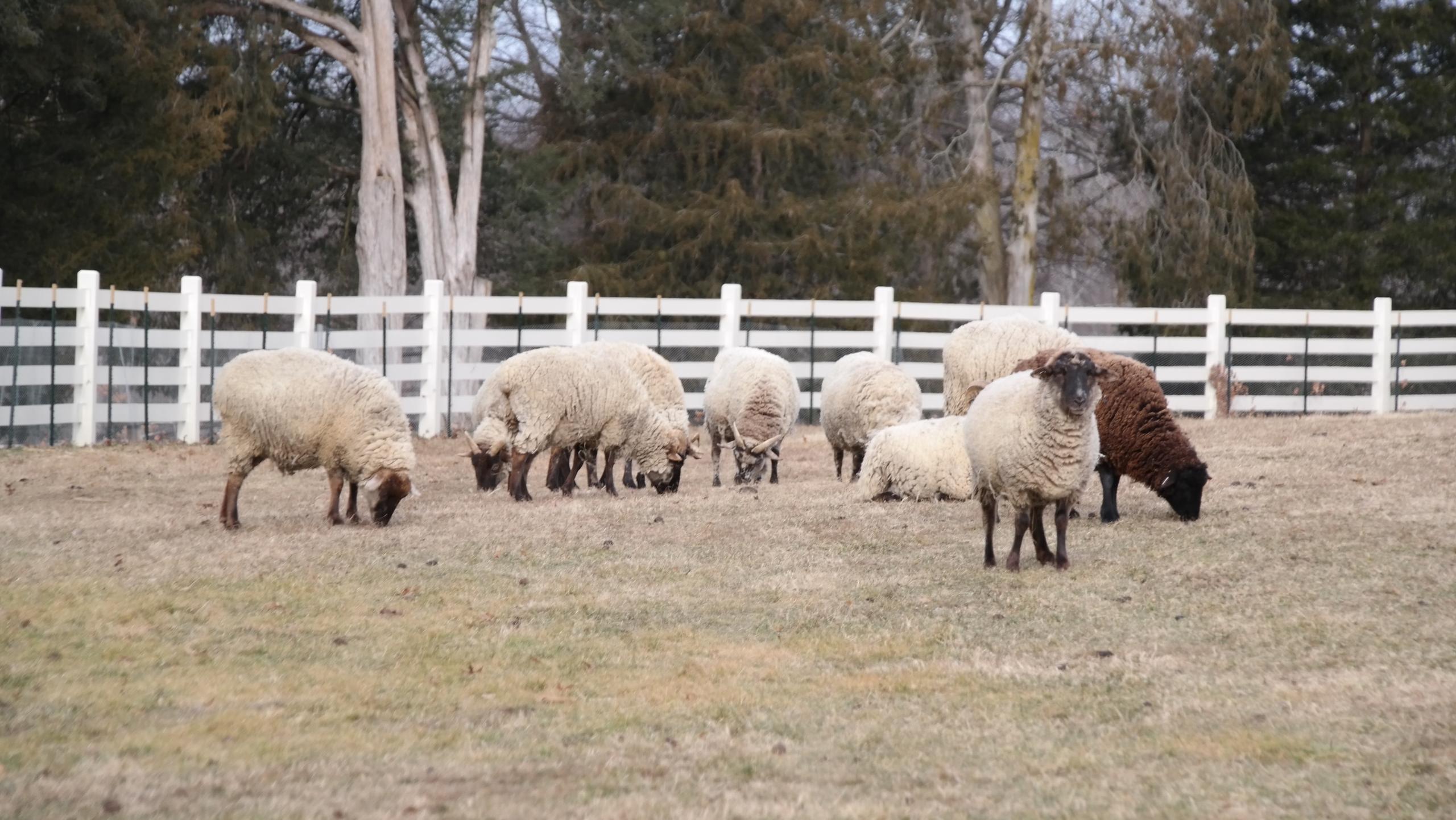 “The Hog Island sheep are probably the closest living things to the sheep that were brought over by the English during the Colonial period,” says Jeannette Beranger, research-and-technical-programs manager for the Livestock Conservancy, which works to conserve endangered breeds.

The kinship is more circumstantial than definitive—genetic testing has turned up no exact DNA match in England to prove the Hog Islands’ provenance. This may be because they developed, over 200 years, to suit local conditions or because, as with other heritage animals in the US, their genetic counterpart abroad has been bred out of existence.

With fewer than 200 breeding animals in the US, Roscoe’s kind are considered critically endangered, the conservancy’s most pressing category. Livestock such as the Hog Islands tend to vanish not from disease or slaughter but due to competition from larger, faster-growing modern breeds. “The sheep were used for wool, for meat, for fertilizer,” Pregent says.”Oxen or the cattle were used for meat, milk, draft work.” Even horns would have been used for buttons or other ornamentation.

Being good for a host of uses means heritage breeds are rarely optimal for any single purpose. Pregent’s lambs won’t grow as large as their commercial cousins, and they take about 18 months to reach full size. (A modern sheep breed can come to full size in as little as six months.) “There are a lot of people to feed in this country—and to clothe,” says Pregent. “When you get into modernized production, you have your specific dairy breeds and specific beef breeds farmers don’t have to feed as long.”

What’s more, the extra time spent feeding, in return for less meat or wool, makes them a gamble for farmers already squeezed by small profit margins. Says Pregent: “Multipurpose animals are going to be left behind.”

Their ancestry does confer advantages, because they’re built to survive Colonial-era conditions. They withstand disease better, scavenge for food more effectively, and are better at avoiding predators. Plus, heritage breeds have one timeless trick up their sleeve. “They taste wonderful!” says Beranger. “I have a Hog Island sheep in my freezer, and I can tell you it’s some of the best lamb I’ve ever had.”

The recent foodie vogue, with its mania for locally sourced goods and connoisseur distinctions, has increased popular interest in rare breeds, chief among them heirloom pigs. “The Tamworth pigs and the Berkshires, the Ossabaws, these hogs that nobody had ever really heard of—all of a sudden these big-name chefs are using them in their restaurants and on television,” Pregent says.

Mount Vernon raises Ossabaw Island hogs, a breed long sequestered in a marshy area between the Bear River and the Atlantic Ocean in Georgia. Its isolation preserved the breed’s similarity to animals brought over hundreds of years ago by the Spanish, but they, too, are dwindling. Today there are about 300 breeding animals. 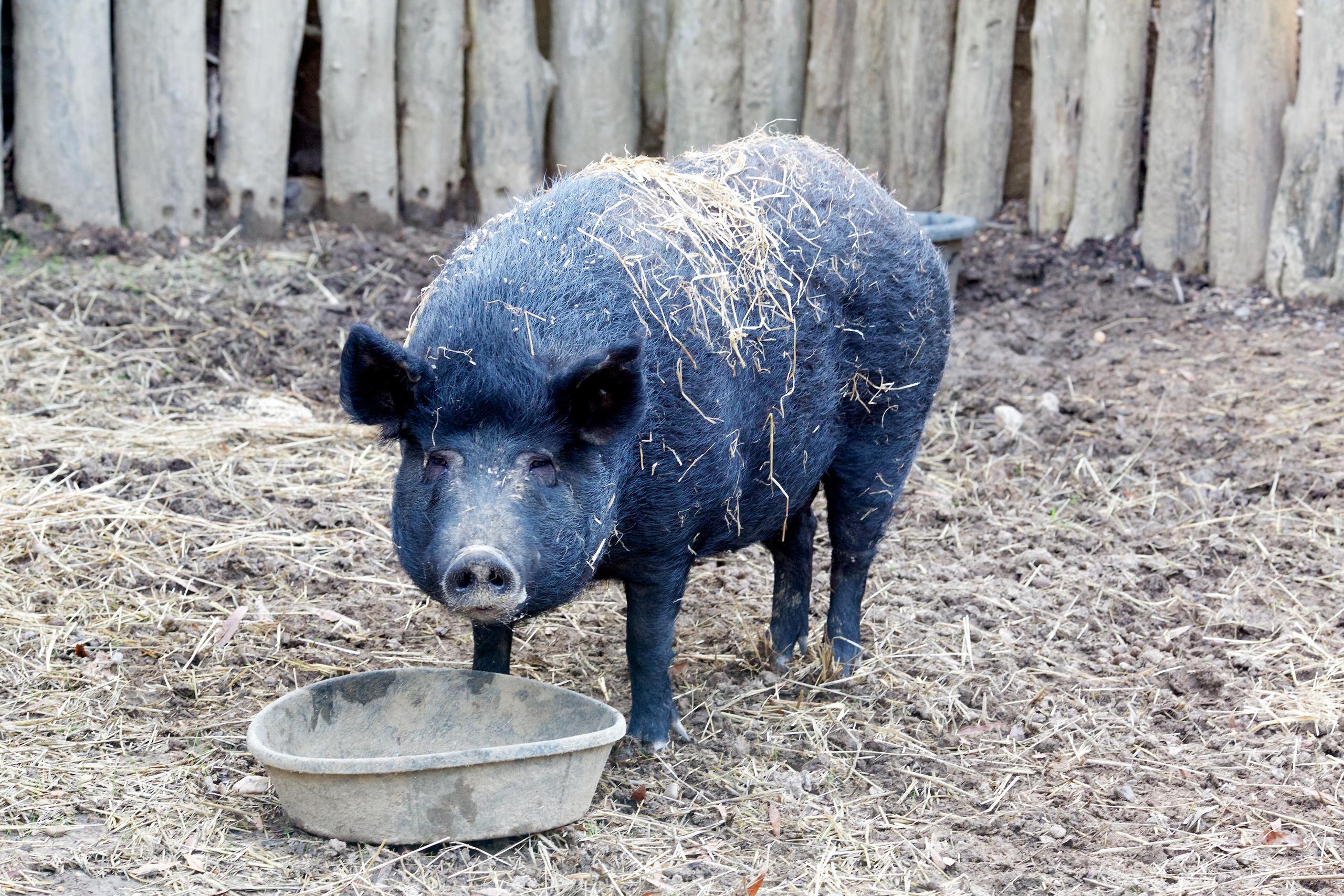 Last March, Marjorie Meek-Bradley, the chef responsible for the DC restaurants Ripple and Roofers Union, requested an Ossabaw for Cochon 555, a traveling competition dedicated to supporting heritage pork breeds. “I know some people thought I was crazy to want an Ossabaw for Cochon,” she says. “They were like, ‘You realize it’s like 50 percent fat?’ It has a unique quality. The meat really does have a great flavor, and if you build dishes around it in a proper way, it’s great.”

Fifty percent fat is an exaggeration, but the pork does have a higher content than is standard today. Most domestic pigs in the US have about 10 to 15 percent body fat. “People get freaked out by too much fat,” says Meek-Bradley, but for the occasional excursion into charcuterie and other rich dishes, it’s ideal: “What I like about the Ossabaws is they have a darker meat that’s a little more flavorful.” The loin, a prized cut, is small, she says, but “definitely worthwhile.”

That flavor helps Pregent and her team continue George Washington’s vision of spreading superior breeds. “We’ve started breeding to help other farms and historic sites start their own programs,” she says.

Four years ago, Autumn Olive Farms in Waynesboro, Virginia, began raising Ossabaws that originated at Mount Vernon. Autumn Olive owner Clay Trainum claims to have one of the largest Ossabaw flocks in the area, roughly 120 to 130 animals, most of which will eventually be sold to restaurants or directly to consumers.

Trainum, who runs the farm with his wife, Linda, says the Ossabaws tend to have a different temperament from his Berkshires: Unlike the placid pigs found in most barnyards, these pigs are jumpy and active.

“You’re trying to bridge 300 years in 30 years with the Ossabaws,” he points out, comparing them to modern breeds, which have been bred for centuries for their docile temperament. The Ossabaws, by contrast, are nervous creatures, far less trusting of humans after only about three decades of cohabitation.

Any difficulty in handling is made up for by the breed’s other qualities. “They have characteristics you can’t buy for love or money,” Trainum says. “The hogs are an incredibly durable and healthy animal—they’re almost bulletproof.” He figures he has saved tens of thousands of dollars in health care and building costs—the hearty Ossabaws can withstand harsher weather and are capable of building their own nests and other rudimentary structures to protect themselves.

If the demand for Ossabaw pork isn’t equal to the demand for modern hogs, the lower costs—and higher prices for the pork—more than compensate. “The Ossabaw is akin to a Cuban cigar,” Trainum says. “It’s not what you’re going to use every day, but for special occasions it’s expensive but magnificent.”

Mount Vernon’s farm facilities are a quick drive from the Colonial buildings that draw about a million visitors a year. One day at the preservation site, Pregent and I walk past an interpreter cooking over an open fire while children flow down a muddy path in a seemingly endless river of brightly colored coats. We stop alongside Jed and Jake, a yoked pair of Devon milking cattle, another rare breed raised at Mount Vernon.

“Their dad was a bull named Quincy—a really nice bull, as bulls go,” livestock handler Steve Kozak tells me as two girls from a school group walk up and start a conversation about the animals, who stare uninterested into the middle distance.

“A lot of folks come here and have never seen a pig or a cow before,” Pregent says. Her work is in part aimed at giving visitors a hands-on experience with animals that suit the historical setting, and Mount Vernon is constantly expanding the number of programs that allow visitors to interact with the creatures. 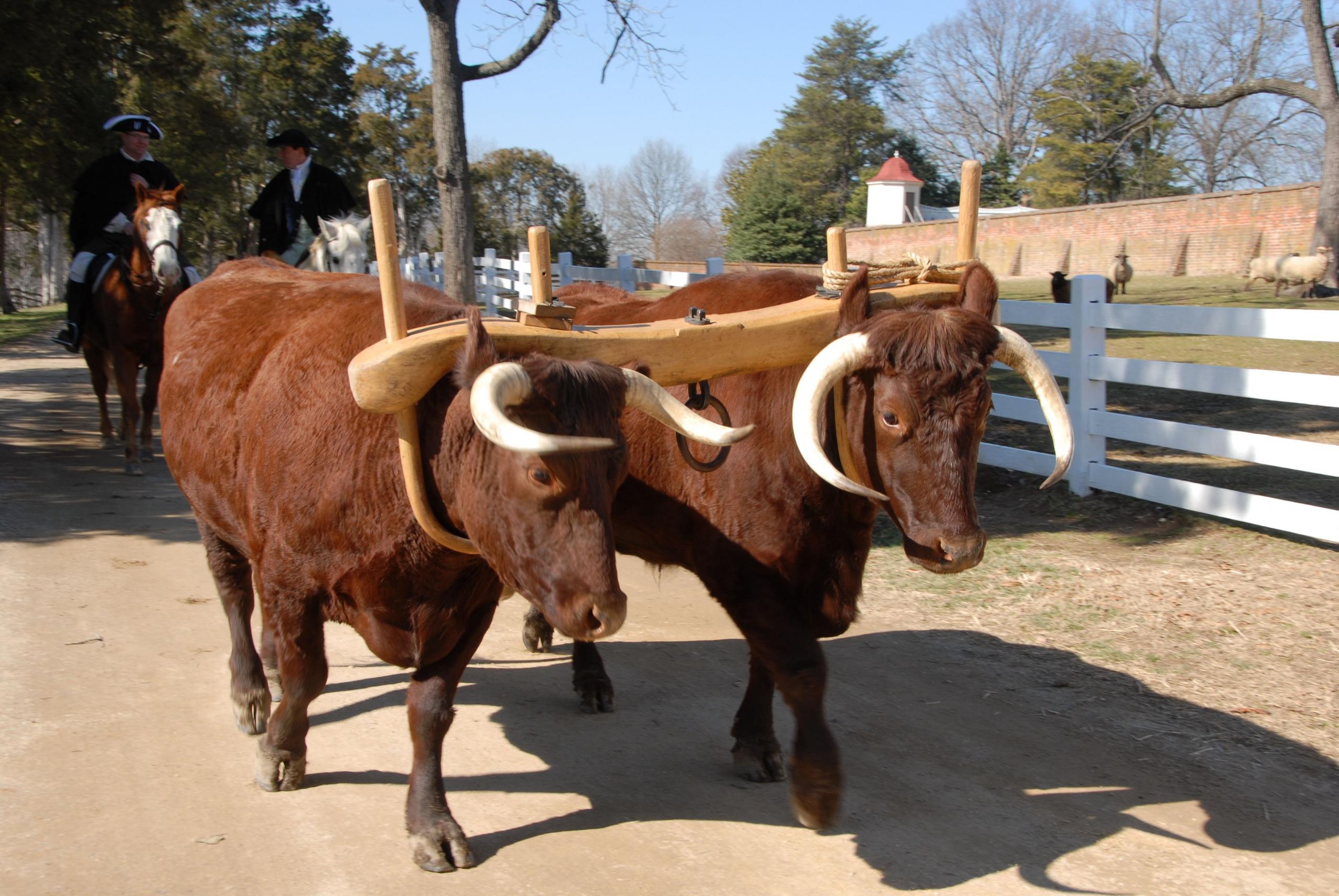 Their interaction, advocates hope, will reinvigorate interest in the breeds themselves. Beranger says the site is a great platform for the rare breeds: “What Mount Vernon does is to get these animals in the spotlight to show people that they’re unique and that this is a living piece of history—a living, breathing, eating piece of history.”

Not least, Pregent believes, Washington himself would feel pleased: “I think and hope he would at least be happy with what we’re trying to do.”

Cara Parks has written for the New York Times and Slate. This article first appeared in the September 2014 issue of Washingtonian.