When Charles Willson Peale painted his portrait in 1772, George Washington sported a variety of accessories to indicate his military status. The sash across his chest, the sword at his side, the embellished cockade on his hat, and the silver gorget around his neck were all symbols of rank that any 18th-century viewer would recognize.

In Peale’s 1772 portrait, George Washington wears a red officer’s sash—possibly this silk example, which descended in the family of Washington’s nephew. Made using a technique called “sprang weaving,” silk sashes had enormous strength and could be used as stretchers to carry wounded officers off the battlefield.

The original sash will only be on display from February 12 - May 10.

In 1830, Martha Washington’s grandson, George Washington Parke Custis, commissioned miniaturist Anson Dickinson to paint a copy of Charles Willson Peale’s 1772 portrait of George Washington. The miniature became the source for an engraving, which was sold for one dollar and widely marketed across the country as a memorial to Washington. The watercolor-on-ivory miniature in this case is a later copy by Dickinson of his 1830 original. 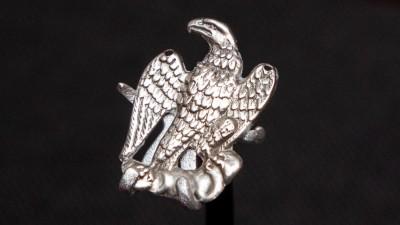 Inspired by British tradition, Washington suggested that all commissioned officers wear a black cockade adorned with a silver bald eagle symbol of the new republic. 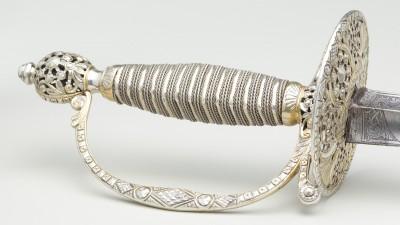 Washington is believed to have worn this sword when he resigned his commission as Commander in Chief in Annapolis in 1783 and when inaugurated as our nation's first president. 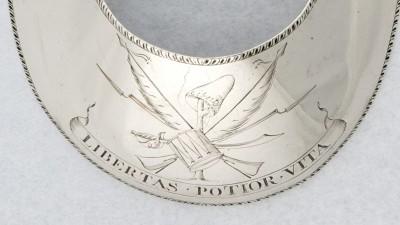 Gorgets were worn about the neck by on-duty officers during the Revolutionary War. According to legend George Washington presented this one to Lieutenant Alexander Hume.