Join the Pilecki Institute in Warsaw, Poland to celebrate the 230th anniversary of the Polish Constitution of May 3, 1791, the second modern constitution following the United States Constitution of 1787, with a number of scholars from around the world including Washington Library Executive Director Dr. Kevin Butterfield. Watch live on April 29 at 12 pm ET (6 pm CEST).

Join the Pilecki Institute in Warsaw, Poland to celebrate the 230th anniversary of the Polish Constitution of May 3, 1791, the second modern constitution following the United States Constitution of 1787, with a number of scholars from around the world including Washington Library Executive Director Dr. Kevin Butterfield. Watch live on April 29 at 12 pm ET (6 pm CEST). 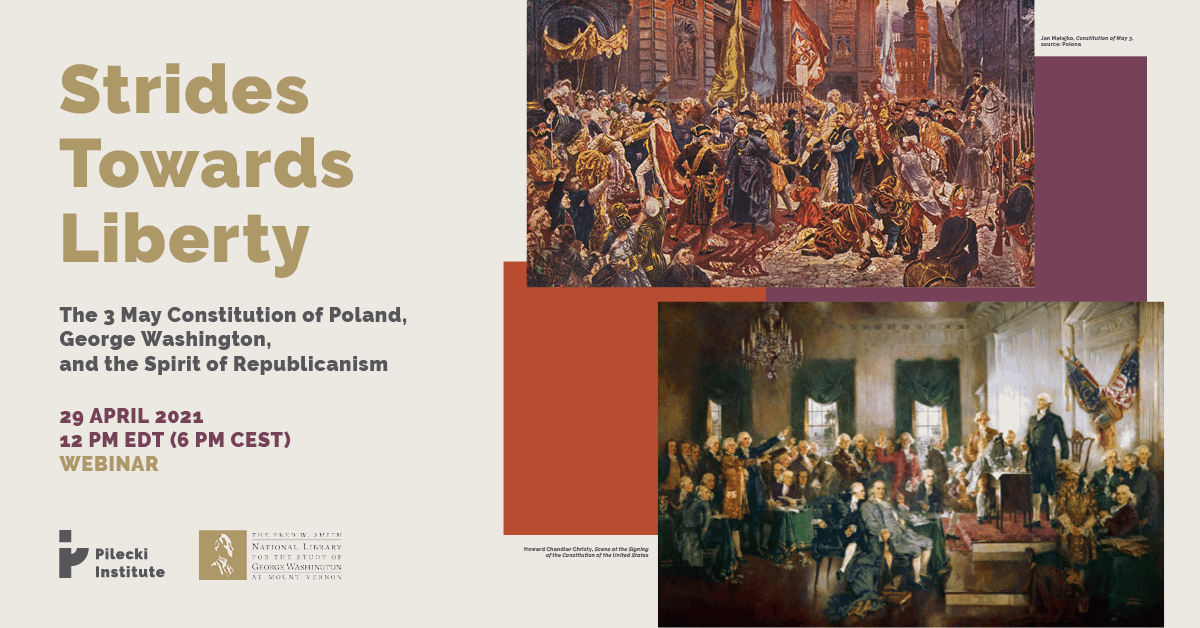 On May 3, 1791, King Stanislaus Augustus Poniatowski of Poland together with the representatives of the Polish people promulgated a constitution that in its preamble read: “desiring to take advantage of the season in which Europe finds itself and of this dying moment that has restored us to ourselves, free of the ignominious dictates of foreign coercion, holding dearer than life, than personal happiness the political existence, external independence and internal liberty of the people whose destiny is entrusted to our hands […] for the establishment of liberty, for the preservation of our country and its borders, with the utmost constancy of spirit [we] ordain the present constitution”.

The document was the first modern constitution in Europe, preceding a few months the French revolutionary act (1791), and the second in the world only after the US constitution (1787). It followed Montesquieu's tripartite system of moderate government rooted in the concept of the rule of law.

However, the May 3 Constitution became something much greater than a statute of government. It originated in the long Polish political tradition of law protecting individual freedom from royal encroachments, dating back at least to the 15th century. Besides, it contrasted with absolutist tendencies holding sway in the neighboring monarchies – Austria, Prussia, and Russia. The Constitution – very much like its US precedent – was, therefore, an idea of a modern political nation seeking the best ways to establish a good government under law and God.

Promulgating the Constitution was the founding moment of the Polish modern political nation. And it had been viewed so from the very beginning as the date of the proclamation was announced a public holiday in Poland two days later. Unlike in the US, the constitution did not survive after the diplomatic and military interventions of the neighboring powers. Poland was partitioned and wiped out from maps. For generations, however, the constitution remained a symbol of Polish longing for freedom and sovereignty and the May 3 was reinstated as a public holiday in 1919 after Poland had reemerged from the WWI struggles. For its powerful patriotic significance and liberty-charged symbolism, the holiday was banned by the Nazis and communists, yet the memory of the constitution never faded.

In 2021 we celebrate the 230th anniversary of the Constitution. The Institute would like to contribute to nation-wide festivities with a strong academic roundtable aiming at an international popular audience. This exchange could address some of the issues: 1) the spirit of republicanism in the late 18th-century Western world; 2) a constitution as a fundament for a modern nation and a rule of law; 3) the meaning and significance of the US and Polish constitutions then and now – their legacies and formative impact on respective societies; 4) the rise of free nations in the long 19th century and the threat to sovereignty, freedom, and law by totalitarian regimes; 5) the constitutions and the Revolutionary War in the collective memory of the contemporary democratic societies – challenges and perspectives.

We are hopeful that this roundtable in a reasonable, informative and insightful way addresses many concerns that haunt the present day, save providing a digestible historical and political reflection. Its comparative and international potential seems like an additional bonus. Given the topic, the content, and its relevance, partnering with Mount Vernon in this program appears as a worthwhile opportunity.

Dorota Pietrzyk-Reeves is Professor of political philosophy at the Jagiellonian University in Krakow. Her most recent books include Polish Republican Discourse in the Sixteenth Century ("Ideas in Context", Cambridge, 2020) and Civil Society, Democracy and Democratization (Frankfurt am Main, 2016).

Martyn Rady is Emeritus Professor of Central European History at University College London and former editor of The Slavonic and East European Review. His recent publications include Customary Law in Hungary: Courts, Texts, and the Tripartitum (Oxford, 2015) and The Habsburgs: The Rise and Fall of a World Power (London, 2020).

Dr. Kevin Butterfield is Executive Director of the Fred W. Smith National Library for the Study of George Washington at Mount Vernon. He is the author of The Making of Tocqueville’s America: Law and Association in the Early United States (Chicago, 2015) and a historian of the post-Revolutionary United States. Butterfield came to Mount Vernon from a tenured appointment as Associate Professor of Classics and Letters at the University of Oklahoma, where he taught early American history for eight years and directed a program for the study of the U.S. Constitution. He received his B.A. in History from the University of Missouri, his M.A. in History from the College of William and Mary, and his Ph.D. in History from Washington University in St. Louis.

Wojciech Kozłowski, PhD, is the director of the Pilecki Institute, a research institution based in Warsaw, and the chief editor of its scholarly journal "Totalitarian and 20th Century Studies". He holds Ph.D. in medieval studies from Central European University and M.A. in history from the University of Warsaw. He was a fellow at the New Europe College and a visiting scholar at the Department of History at Harvard.

The Pilecki Institute is a public research institution based in Warsaw (Poland). Its primary research objective is the Polish experience of confronting two totalitarian regimes – Nazi and Soviet – during the Second World War. Since both regimes did not emerge in a vacuum but in particular historical contexts, and their activities strongly impacted the course of the global 20thcentury, the Institute promotes and shares Polish freedom-safeguarding traditions with international audience, and believes that best learning, trust, and understanding happen in conversation.