Each loaf is baked in a reproduction 18th-century clay oven and made of grains that are authentic to the time period, and, when possible, were ground at George Washington's Gristmill.

Become a Member for Free Admission

Each loaf is baked in a reproduction 18th-century clay oven and made of grains that are authentic to the time period, and, when possible, were ground at George Washington's Gristmill.

Become a Member for Free Admission

Sometimes referred to as “Thirded Bread,” this loaf is made up of wheat, corn, and rye—in equal thirded parts—with the addition of molasses.

In 1786, George Washington included 1¼ pounds of Brown Bread as part of a daily ration for Ditchers working in the Mill Swamp.

This loaf contains Black Seashore Rye, one of the
oldest varieties still cultivated in the United States of America.

At Morristown 1780, a receipt was signed by Christopher Ludwick, Superintendent of Bakers and Director of the Baking Department for the Continental Army, for an order that included "2 Barrels of Butterd Bisquet."

The recipe is very similar to Abernethy Biscuits, consisting of flour, milk, butter, and caraway seed. These were digestive biscuits to be eaten at the end of a meal.

A Loaf of Bread and Cheese

Included is a Loaf of Bread and a proper portion of Clothbound Cheese, which is in the Truckle style of English Cheddars of old but made in an American Creamery.

Culinarian historian Justin Cherry is Mount Vernon's Resident Baker and is the chef and owner of the Half Crown Bakehouse, which specializes in colonial foodways.

Cherry was a 2019 Fellow at the Washington Library. His research focused on the 18th-century foodways culture at Mount Vernon.

The first white Lammas wheat ground at the Gristmill since Washington’s day was baked in Cherry’s mobile 18th-century clay oven and sold at Revolutionary War Weekend in May 2019.

In March 2020, Cherry and the Historic Trades Team installed a bake oven in Washington’s Farm. Bake ovens, also known as beehive, masonry, brick, pizza, or bread ovens, were a staple in early America.

These thick clay domes were built into kitchens next to the hearth, like the original oven in the Mansion’s Kitchen, or built outdoors. The design of Mount Vernon’s reproduction oven resembles those used throughout the Chesapeake region.

Evidence of ovens like this has not been found at Mount Vernon, but similar ovens may have existed around the estate. 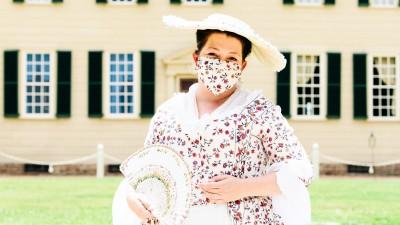 Face masks are recommended indoors for all persons, vaccinated or unvaccinated.

Face masks are required for all unvaccinated guests.

George Washington constructed a gristmill at his Dogue Run Farm in 1770-1771. In 1791, Washington upgraded his operation, installing a new automated method—the Evans system—that replaced manual labor with mechanical means through all the steps in the milling process.

Enjoy stone-ground grits, pancake flour, and yellow cornmeal that have been produced by water power at George Washington’s Gristmill at Mount Vernon.

Shop online or in-person at the Shops at Mount Vernon.