Header Image: Surrender of Lord Cornwallis by John Trumbull, oil on canvas, 1820; placed 1826 Rotunda U.S. Capitol. Courtesy of the Architect of the Capitol. 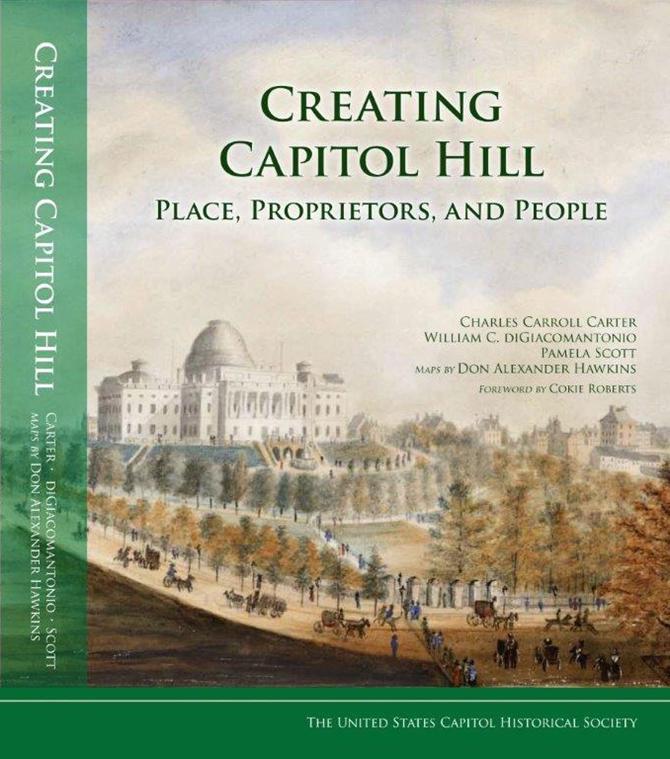 The book details the creativity and dedication of the men who led in the early years, particularly Daniel Carroll of Duddington and Thomas Law.  Their willingness to provide the leadership and take the risks in this amazing story is clear in the details.  What got built in the early years is due to these men, and not to attention from the national government.  The streets, the bridges, the canals, the markets, the hotels, the houses, the rental spaces both business and residential – even the wooden cabins for free African Americans who could not afford more – were organized and built by these two men in particular.

This book explains how settling the federal government in Washington, DC was a public-private partnership: the original proprietors surrendered half of their land with the reasonable expectation that the remainder would significantly increase in value. Much like the idea advocated in James Madison’s famous essay Federalist #10, it was believed that expanding the number of stakeholders in the venture would bolster its chances of ultimate success. With both the proprietors and commissioners, George Washington trusted “enlightened self-interest” would yield optimal results.

The concluding essay entitled “Capitol Neighbors” is a multifaceted account of how, beginning in the late 1790s, Daniel Carroll of Duddington, joined by Anglo-Indian émigré investor Thomas Law, created a fledgling community to serve several Congresses beginning in 1800. This overview reveals many ways and means by which one great American city was born.

Donald R. Kennon is the former chief historian and vice president of the United States Capitol Historical Society. He is the editor of the Ohio University Press series Perspectives on the History of Congress, 1789–1801.

Don Alexander Hawkins is an architect and a nearly life-long resident and student of Washington. He began mapping aspects of the city’s early history while earning a Master’s Degree in Urban Design at Catholic University. He has lectured widely on Washington’s beginnings and writes occasionally on its major unbuilt projects in Washington History Magazine.  He is presently writing and drawing a book, Washington’s L’Enfant Plan: Described and Deconstructed, for early publication.

Charles Carroll Carter, born in Philadelphia and a longtime resident of Washington, D.C., is a descendant of three important American families: Carrolls, Carters, and Lees. Educated at Portsmouth Priory, later Abbey, in Rhode Island, he is a graduate of Georgetown Preparatory School (1945) and the University of Notre Dame (1949). He earned an MBA from American University in 1959. Carroll served as a commissioned officer during the Korean War. In 1969, he joined the newly-formed U.S. Department of Transportation, and later became special assistant to the secretary. In 1974, he became the founder, publisher, and editor of Mass Transit magazine, a monthly international periodical concerning all aspects of urban transportation.

Pamela Scott is an independent scholar who has been researching, teaching, lecturing, curating exhibits, and writing about the national capital’s architectural history, planning, and landscape for more than four decades. The Capitol has been at the center of Scott’s research, teaching, and writing. Articles on Stephen Hallet (1992), Charles Bulfinch (2000), Benjamin Henry Latrobe (2016), and John Trumbull (2017) have delved into the contributions of these key individuals.  Her 1993 exhibit at the Library of Congress resulted in her exploration of the Capitol’s early architecture in Temple of Liberty (1995). “Capitol Square: Early History, 1791–1873,” Cultural Landscape Report (2011), and overview of Capitol’s changing landscape, will lead to future detailed studies of its horticultural tradition.