A distinguished jury comprised of notable historians Denver Brunsman, Flora Fraser, and Peter S. Onuf, selected the finalists from a field of over 50 books. The winner of the 2018 prize were announced on Wednesday, May 23 at George Washington’s Mount Vernon.

THE WINNER OF THE 2018 GEORGE WASHINGTON PRIZE IS

George Washington: A Life in Books 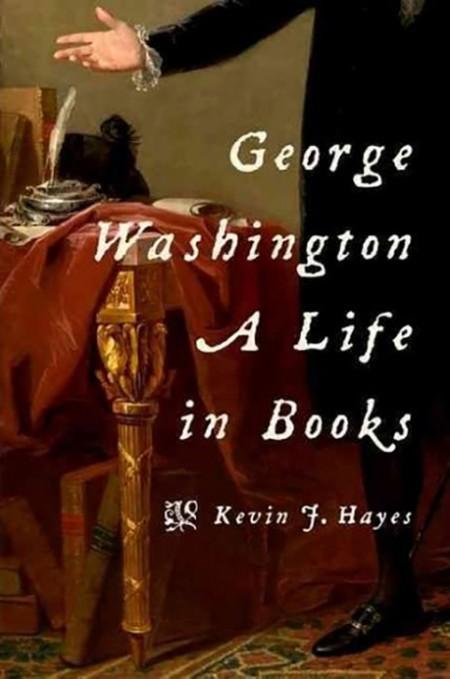 When it comes to the Founding Fathers, Thomas Jefferson, Benjamin Franklin, and Alexander Hamilton are generally considered the great minds of early America. George Washington, instead, is toasted with accolades regarding his solid common sense and strength in battle. Indeed, John Adams once snobbishly dismissed him as "too illiterate, unlearned, unread for his station and reputation." Yet Adams, as well as the majority of the men who knew Washington in his life, were unaware of his singular devotion to self-improvement.

Based on a comprehensive amount of research at the Library of Congress, the collections at Mount Vernon, and rare book archives scattered across the country, Kevin J. Hayes corrects this misconception and reconstructs in vivid detail the active intellectual life that has gone largely unnoticed in conventional narratives of Washington. Despite being a lifelong reader, Washington felt an acute sense of embarrassment about his relative lack of formal education and cultural sophistication, and in this sparkling literary biography, Hayes illustrates just how tirelessly Washington worked to improve. Beginning with the primers, forgotten periodicals, conduct books, and classic eighteenth-century novels such as Tom Jones that shaped Washington's early life, Hayes studies Washington's letters and journals, charting the many ways the books of his upbringing affected decisions before and during the Revolutionary War. The final section of the book covers the voluminous reading that occurred during Washington's presidency and his retirement at Mount Vernon. Throughout, Hayes examines Washington's writing as well as his reading, from The Journal of Major George Washington through his Farewell Address. The sheer breadth of titles under review here allow readers to glimpse Washington's views on foreign policy, economics, the law, art, slavery, marriage, and religion-and how those views shaped the young nation..

Ultimately, this sharply written biography offers a fresh perspective on America's Father, uncovering the ideas that shaped his intellectual journey and, subsequently, the development of America. 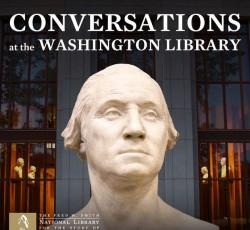 In this episode of Conversations at the Washington Library, Mount Vernon's President and C.E.O. Douglas Bradburn sits down with scholar Kevin J. Hayes to discuss his new book, George Washington: A Life in Books.

The New Map of Empire: How Britain Imagined America before Independence

After the Treaty of Paris ended the Seven Years’ War in 1763, British America stretched from Hudson Bay to the Florida Keys, from the Atlantic coast to the Mississippi River, and across new islands in the West Indies. To better rule these vast dominions, Britain set out to map its new territories with unprecedented rigor and precision. Max Edelson’s The New Map of Empire pictures the contested geography of the British Atlantic world and offers new explanations of the causes and consequences of Britain’s imperial ambitions in the generation before the American Revolution.

Under orders from King George III to reform the colonies, the Board of Trade dispatched surveyors to map far-flung frontiers, chart coastlines in the Gulf of St. Lawrence, sound Florida’s rivers, parcel tropical islands into plantation tracts, and mark boundaries with indigenous nations across the continental interior. Scaled to military standards of resolution, the maps they produced sought to capture the essential attributes of colonial spaces—their natural capacities for agriculture, navigation, and commerce—and give British officials the knowledge they needed to take command over colonization from across the Atlantic.

Britain’s vision of imperial control threatened to displace colonists as meaningful agents of empire and diminished what they viewed as their greatest historical accomplishment: settling the New World. As London’s mapmakers published these images of order in breathtaking American atlases, Continental and British forces were already engaged in a violent contest over who would control the real spaces they represented.

On the night of March 5, 1770, British soldiers fired into a crowd gathered in front of Boston’s Custom House, killing five people. Denounced as an act of unprovoked violence and villainy, the event that came to be known as the Boston Massacre is one of the most familiar incidents in American history, yet one of the least understood. Eric Hinderaker revisits this dramatic episode, examining in forensic detail the facts of that fateful night, the competing narratives that molded public perceptions at the time, and the long campaign afterward to transform the tragedy into a touchstone of American identity.

When Parliament stationed two thousand British troops in Boston beginning in 1768, resentment spread rapidly among the populace. Steeped in traditions of self-government and famous for their Yankee independence, Bostonians were primed to resist the imposition. Living up to their reputation as Britain’s most intransigent North American community, they refused compromise and increasingly interpreted their conflict with Britain as a matter of principle. Relations between Britain and the North American colonies deteriorated precipitously after the shooting at the Custom House, and it soon became the catalyzing incident that placed Boston in the vanguard of the Patriot movement.

Fundamental uncertainties about the night’s events cannot be resolved. But the larger significance of the Boston Massacre extends from the era of the American Revolution to our own time, when the use of violence in policing crowd behavior has once again become a pressing public issue.

Own a signed copy of one on these award winning books!

This authoritative biography of Patrick Henry—the underappreciated founding father best known for saying, “Give me liberty, or give me death!”—restores him and his fellow Virginians to their seminal place in the story of American independence.

Born in 1736, Patrick Henry was an attorney and planter, and an outstanding orator in the movement for independence. A contemporary of Washington, Henry stood with John and Samuel Adams among the leaders of the colonial resistance to Great Britain that ultimately created the United States. The first governor of Virginia after independence, he was re-elected several times. After declining to attend the Constitutional Convention of 1787, Henry opposed the Constitution, arguing that it granted too much power to the central government. Although he denounced slavery as evil, like many other southern slave-owners he accepted its continuation. Henry pushed vigorously for the ten amendments to the new Constitution, and then supported Washington and national unity against the bitter party divisions of the 1790s. He was enormously influential in his time, but his accomplishments, other than his oratory, were subsequently all but forgotten. Kukla’s biography restores Henry and his Virginia compatriots to the front rank of advocates for American independence.

Jon Kukla has thoroughly researched Henry’s life, even living on one of Henry’s estates. He brings both newly discovered documents and new insights to the story of the patriot who played a central role in the movement to independence, the Revolution, the Constitutional era, and the early Republic. This book is an important contribution to our understanding of the nation’s founding.

The Burr Conspiracy Uncovering the Story of an Early American Crisis

In 1805 and 1806, Aaron Burr, former vice president of the newly formed American republic, traveled through the Trans-Appalachian West gathering support for a mysterious enterprise, for which he was arrested and tried for treason in 1807. This book explores the political and cultural forces that shaped how Americans made sense of the uncertain rumors and reports about Burr’s intentions and movements, and examines what the resulting crisis reveals about their anxieties concerning the new nation’s fragile union and uncertain republic.

Burr was said to have enticed some people with plans to liberate Spanish Mexico, others with promises of land in the Orleans Territory, still others with talk of building a new empire beyond the Appalachian Mountains. The Burr Conspiracy was a cause célèbre of the early republic—with Burr cast as the chief villain of the Founding Fathers—even as the evidence against him was vague and conflicting. Rather than trying to discover the real intentions of Burr or his accusers—Thomas Jefferson foremost among them—James E. Lewis Jr. looks at how differing understandings of the Burr Conspiracy were shaped by everything from partisan politics and biased newspapers to notions of honor and gentility. He also traces the enduring legacy of the stories that were told and accepted during this moment of uncertainty.

The Burr Conspiracy offers a panoramic and multifaceted portrait of the United States at a time when it was far from clear to its people how long it would last.

The Power of Objects in Eighteenth-Century America

Over the course of the eighteenth century, Anglo-Americans purchased an unprecedented number and array of goods. The Power of Objects in Eighteenth-Century British America investigates these diverse artifacts—from portraits and city views to gravestones, dressing furniture, and prosthetic devices—to explore how elite American consumers assembled objects to form a new civil society on the margins of the British Empire. In this interdisciplinary transatlantic study, artifacts emerge as key players in the formation of Anglo-American communities and eventually of American citizenship. Deftly interweaving analysis of images with furniture, architecture, clothing, and literary works, Van Horn reconstructs the networks of goods that bound together consumers in Boston, New York, Philadelphia, and Charleston.

Moving beyond emulation and the desire for social status as the primary motivators for consumption, Van Horn shows that Anglo-Americans’ material choices were intimately bound up with their efforts to distance themselves from Native Americans and African Americans. She also traces women’s contested place in forging provincial culture. As encountered through a woman’s application of makeup at her dressing table or an amputee’s donning of a wooden leg after the Revolutionary War, material artifacts were far from passive markers of rank or political identification. They made Anglo-American society.

This sweeping history of popular religion in eighteenth-century New England examines the experiences of ordinary people living through extraordinary times. Drawing on an unprecedented quantity of letters, diaries, and testimonies, Douglas Winiarski recovers the pervasive and vigorous lay piety of the early eighteenth century. George Whitefield's preaching tour of 1740 called into question the fundamental assumptions of this thriving religious culture. Incited by Whitefield and fascinated by miraculous gifts of the Holy Spirit--visions, bodily fits, and sudden conversions--countless New Englanders broke ranks with family, neighbors, and ministers who dismissed their religious experiences as delusive enthusiasm. These new converts, the progenitors of today's evangelical movement, bitterly assaulted the Congregational establishment.

The 1740s and 1750s were the dark night of the New England soul, as men and women groped toward a restructured religious order. Conflict transformed inclusive parishes into exclusive networks of combative spiritual seekers. Then as now, evangelicalism emboldened ordinary people to question traditional authorities. Their challenge shattered whole communities.