Essays
Harpsichord: 1793 Original and Nelly’s “New” Early American Music Early American Bands George Washington and Dance The Bull-Finch Dances of Colonial America How to Dance Francis Hopkinson Real Words to "Yankee Doodle" Star-Spangled Banner Clothing Social Change as Reflected in The Dancing Master Fiddle, Dance, and Sing With George Bush Ancient Fifes and Drums Levi Lovering and His Mode of Notes Music at Jamestown A March Allegedly Played at Yorktown On The Set of “The Last Of The Mohicans”
About Book David & Ginger Hildebrand Databases Essays

A fruitful way to study dance history is to look at the new material presented in commercial publications issued in serial form. While the material that is reprinted over and over again may or may not indicate longevity, new dances give a view of what the buying public is demanding. They also show the efforts of entrepreneurs in the trade to meet those demands and to create new markets. What others select from those books is also of interest. As I was helping with the notes to the forthcoming facsimile of André Lorin’s manuscript of country dances presented to Louis XIV of France in 1687, some interesting aspects of the changing repertory in London-printed Dancing Master series became evident.1 In August 1685, Lorin accompanied a diplomatic mission to England to carry French congratulations to James II on his accession. While in England, Lorin collected nine country dances, four of which had been printed for the first time in the 1670s in The Dancing Master. Four did not appear until the year after Lorin’s trip, and another was not printed until 1698. These choices suggest that Lorin was chiefly interested in very new dances, and that he collected from masters on the leading edge of the field.2

The first edition of The Dancing Master appeared in 1651 with 105 dances.3 It was hurried to market, ostensibly because a competitor was in the wings—and the many errors of music and dance supports publisher John Playford’s apologies for that haste. Succeeding volumes show the editor’s desire to gratify his customers’ desires as various dances were dropped or added, and the whole was rearranged and modernized.

The earliest known English country dances were in a variety of formations involving small numbers of couples. They were chiefly danced in private or domestic settings by advantaged performers of equal social rank. Most of the dances were complex enough to need rehearsal. Dance descriptions or instructions in the few extant manuscripts and in early editions of The Dancing Master are often directed to specific people as each dancer’s role was distinct. Between 1651 and the 1720s, the small set dances declined in favor and were replaced by longways duple or triple minor dances, suitable for performance in large public spaces by many dancers of varying experience and without previous rehearsal. By the end of the eighteenth-century country dances were entirely in triple minor longways formation, were composed of a small group of standard figures, and were danced chiefly by middle-class performers who had only to watch the top couple perform a few rounds to be able to join in the dance. Instructions were almost entirely directed to the first couple and the others stood idle for much of the time, eventually progressing up to the top when they then joined the dance.

In the 1670s, this change began to be visible in the printed manuals. In the fifth edition of the first volume of The Dancing Master (1675) five new longways dances appear at the end of the book.4 The last four of these include an opening instruction that is quite different from the other dances in the book: “Honour to the Presence. Lead up all forward and back __ That again __ ”.5 Most of the other longways dances began with “Lead up all a D. and back __ . That again __ ”. While the lead up instruction includes a note for the music (the marks __ which denotes first time through the music and __ , second time through the music), the honor movement has no music indication in the new dances. (See figure 1.) 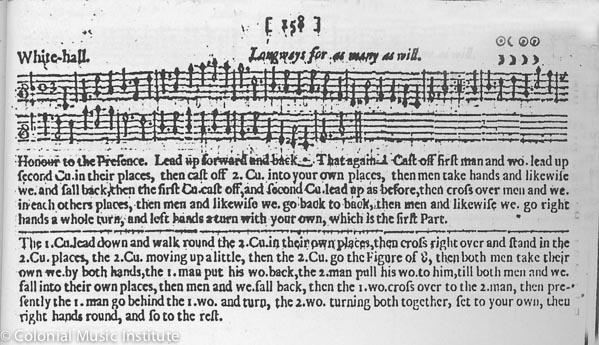 In the next edition, the sixth (1679), a group of twenty-two dances were added.6 These have a similar opening instruction with the addition of an honor to “your woman.”7 This instruction was followed by a line setting it off from the main dance directions, and there is no indication as to how the music fits this opening figure, if at all. (See figure 2.)

It is not at all clear how this opening figure is to be performed. 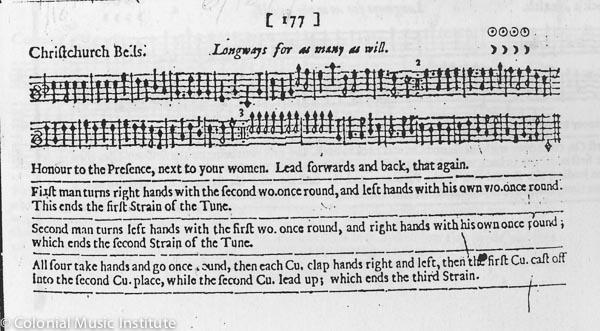 Another feature of this new collection of dances is the presence of several new dances in duple minor longways formation in which, after the honors figure, the remaining figures are performed in sequence and at the end the first couple is progressed to second place. In most of the early “longways for as many as will” formation dances, each figure is performed as many times as is needed to progress the first couple to the bottom of the set and back to first place, where they then lead off the second figure, dancing that to the bottom and back up, &c. The usual instructions say “do this change to all” or “Do this to the last.”

There are true duple minor longways dances in earlier editions. The first of 1651 included four: “New New Nothing,” “Tom Tinker,” “The Punk’s Delight (the new way),” and “Lady Cullen.” “Simple Simon” was added in the third edition (1657), and “Green Stockings” in the fifth (1675). Out of the 160 dances in the sixth edition (1679), most of which either don’t progress at all, or progress figure by figure, the presence of six duple minor and three triple minor dances (the first appearance of this type) among the twenty-two new dances suggests that this type of progressive dance was beginning to gain popularity.8

In the seventh edition (1686) all of the previous dances are retained, three more dances with opening honors are added.9 Then a large group of longways dances is appended in which another change can be discerned. Rather than having each figure followed by the instruction: “Do this change to the last, the rest following” the instruction becomes “the rest do the same” or “the other Cu. doing the same.” However, many of these new dances have specific instructions for the arrangement of the music which makes it clear that each figure is to be performed once, thus they are actually true duple minor progressive dances.10 Lorin’s “Excuse Me” is among this group. (See figure 4.) 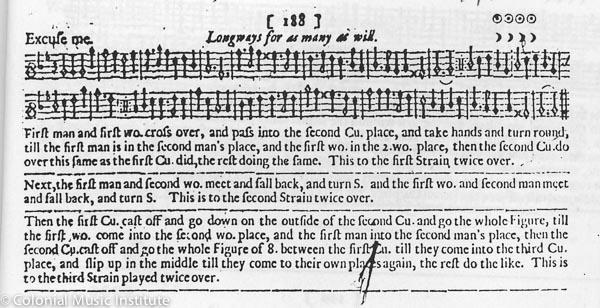 While these observations seem quite minor and rather confusing, I believe that they reflect the beginning of a change in the social environment of the English country dance.11 The need to honor the presence and one’s partner suggests a more impersonal ceremonial or public setting. The “presence” may have been the company in the room, as André Lorin indicates in his manuscript layout of “Christchurch Bells.” It may have been the King, as in drawings of minuets danced at Versailles as seen in Rameau’s Le Maître à Danser (Paris: 1725).12

Charles II was restored to the English throne in 1660 and returned from exile in France with the sister of Louis XIII as his wife. He understood the importance of a regal and powerful court life, and encouraged the growth of painting, music, theater and dance to enhance this public image. These dances may have been a conscious attempt to appeal to the court, adding ceremony to the recreational dances. The attempt appears to have been in vain. While these dances continued to be included in later editions of The Dancing Master, no more dances with this kind of honors instruction were added.
At this period, the stirrings of a newly empowered social class was beginning to be felt. After the deposition of Charles I in 1641, control of power in England had shifted away from the court. Colonization and mercantile opportunities had created consumers and consumption was creating wealth. Control of these new opportunities was critical, but neither Charles II (1660–84), James II (1684–89), William and Mary (1689–1702), nor Queen Anne (1702–14) had sufficient public confidence or power to seize it. With the ascension of the Hanoverian George I in 1714, it was too late. A “consumer revolution” was well underway, led by merchants and wealthy nobility but not by the crown.12 Lacking a court to enhance their appearances, the new leaders of society used other public spaces—chiefly the dance floor—to display their wealth and power. The English country dance became the staple in those ballrooms, and changed from intimate domestic formations to a standard longways type to fill the public needs.

2. 1675: “White-hall”; 1679: “Christchurch Bells,” “Valentine’s Day,” “Hedgelane”; 1686: “The New Bath,” “Cupid’s Garden,” “Excuse Me,” “Vienna”; 1698: “Winsdort [Windsor] Castle.” Lorin’s manuscript includes four additional dances in English country dance formation: “Menuet Anglois,” “Irish Jig,” and two titled “Contredance nouvelle.” While English sources were important to Lorin’s work, he did not follow them slavishly. In some cases he made minor changes to the dances, for others, gave entirely new figures. He may have created the four additional dances himself in the English country dance format.

3. The first edition of the first volume was titled The English Dancing Master. “English” was dropped with the second edition. By 1728, the series had reached three volumes, eighteen editions of the first, four of the second and two of the third.

5. The only other dance with a similar opening is “The Slip,” that had been in all editions and began with: “Honour to the Presence __ Honour to your own __ ”. But for this dance music was indicated for the honors.

6. The new dances were all together at the end: “The King’s Jig” on p. 162 through “Old Simon the King on p. 182. It is interesting to note that Lorin selected three dances from this group.

11. In her Playford’s ‘English Dancing Master 1651’ (London: 1957, xxiv), Margaret Dean Smith noted the change in the seventh edition (1686), stating that it was “enlarged to 209 dances, including many of intricate design with fine tunes, and an Appendix of a further 32 tunes, it appears designed to meet the demand of the new Assembly Rooms, and the adoption of the English country dance abroad.” Lorin’s manuscript certainly indicates that English country dances were traveling abroad.