Essays
Harpsichord: 1793 Original and Nelly’s “New” Early American Music Early American Bands George Washington and Dance The Bull-Finch Dances of Colonial America How to Dance Francis Hopkinson Real Words to "Yankee Doodle" Star-Spangled Banner Clothing Social Change as Reflected in The Dancing Master Fiddle, Dance, and Sing With George Bush Ancient Fifes and Drums Levi Lovering and His Mode of Notes Music at Jamestown A March Allegedly Played at Yorktown On The Set of “The Last Of The Mohicans”
About Book David & Ginger Hildebrand Databases Essays

The following brief essay is designed for students and others interested in an introduction to this field. This area includes a tremendous amount of information to answer basic questions such as:

What was Colonial or "Early American" music?

Colonial music was not so much music written in America before the Revolution as it was music that was brought here and helped define the people who were to make a new country. Understanding the music that early Americans chose to sing and play gives us a better understanding of the colonists themselves. Their music included ballads, dance tunes, folk songs and parodies, comic opera arias, drum signals, psalms, minuets, and sonatas. Such music came mostly from England, Scotland, Ireland, Germany, Italy, France, and Africa, and it was played on whatever instruments were handy.

In early America, a wonderful variety of types and styles of music emerged, expressing the full spectrum of colonial life. It is clear that while our ancestors were musically dependent upon Great Britain, Europe, and Africa, for the most part, uniquely American developments were already felt before 1776. To understand, appreciate, and translate such rich history behind the pleasing melodies and stories told through song—that is our professional mission.

Colonial music involved both written and oral/aural processes. Many people knew a large body of tunes by ear, and we frequently find new sets of words "composed" to fit these older tunes. Single tunes also served a variety of functions—for example, "Over the Hills and Far Away" served as a theater song, a recruiting song, a dance tune, and a military march. Further, the popularity of specific pieces of music varied over time and by region, depending upon the flow of fashion and backgrounds of people living in a certain area. Some instruments and types of music were more appropriate to certain classes, genders, and ethnic backgrounds.

Which instruments were used?

Most instruments that we have today were around by the Revolution (when pianos were just coming into popularity) but certainly, some instruments were more prevalent than others. Violins were by far the most popular instruments. Men of all different classes, from Thomas Jefferson to indentured servants and enslaved people, played violins or fiddles. Prices varied from cheap to quite expensive and there is little doubt that violins were imported in great numbers.

Second in popularity to violins were flutes of many different kinds, also played for the most part by men. There were fifes, recorders (in early America these were called common or English flutes), and transverse flutes (called then German flutes), but it is doubtful that there were any pennywhistles, despite their numbers in the mouths of little tourists at Williamsburg. 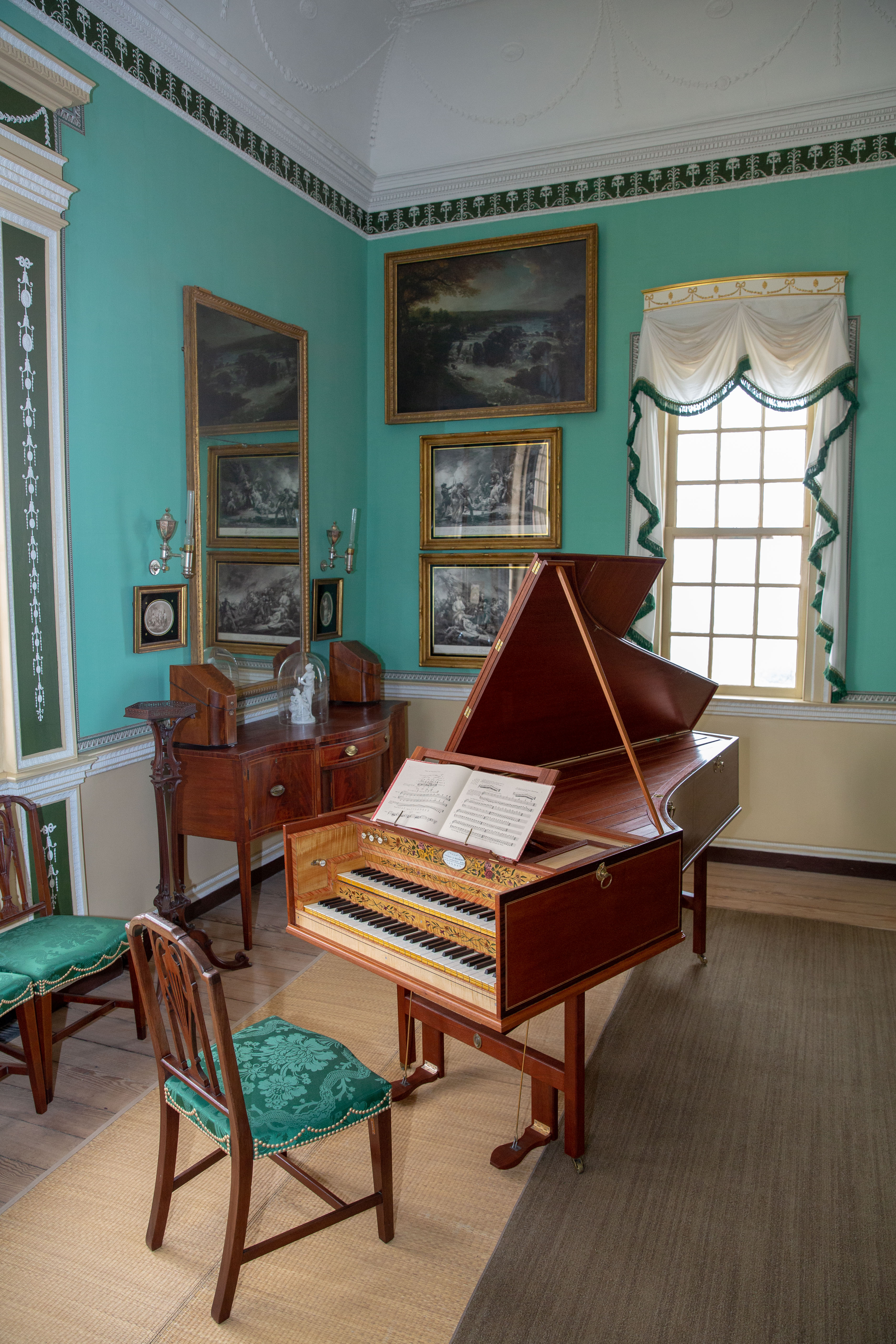 So what did the women play? A very tight self-regulation of activity in the name of "maintaining reputation" limited musical options for women. Many wealthy women played harpsichords on which they practiced and performed for family and friends. The other instrument of choice for women was what we call today an English guitar, a now extinct 10-string version of a Renaissance cittern with a flat back and a tear-drop shape, tuned to an open C chord, seen in the picture above. The grandmother of our modern guitar was around also, but not as popular; it is called today a Baroque guitar, and it was a small version of a classical guitar with gut strings, frets of gut tied around the neck, and strung as a modern 12-string without the bass E strings, so it was also a 10 stringed instrument. It wasn't until around 1820 that the standard guitar had 6 strings. Women also played harps, but not before the end of the 18th century.

Musical theater in the colonies was very popular. Most performed were ballad operas—compilations of familiar folk tunes with new words strung together by spoken dialogue to tell a comic story. The most famous of these was The Beggar's Opera, compiled in 1728 in London as a reaction to the elite Italian opera that was so popular among the wealthy in that city. The Beggar's Opera was performed in the colonies as early as 1750. Just as many people today will buy the sheet music and/or CD to a favorite movie or musical, so the colonists would bring home the music and words to songs in The Beggar's Opera (or to any of the many other ballad operas), and play and sing them at home.

Music was also critical to the favorite pastime of the colonists—dancing. There was a huge repertory of dance tunes, mostly English and Celtic reels, hornpipes, jigs, and minuets. Dancing was usually accompanied by a single violin, but for special occasions, there may have been 4 or 5 musicians. Whatever instruments and players could be gathered was fine for the dancers. We have a reference to a dance being accompanied by a solo French horn, for lack of a more suitable instrument. This must have been quite a challenge since brass instruments had no valves yet!

The most varied sort of music in colonial America was related to the several religious denominations active here. The devout Congregationalist churches of New England encouraged the singing of psalms, anthems, and fuging tunes. After 1720, paid singing masters taught church members to read from music, and a large body of unique compositions emerged, most notably by William Billings of Boston. However, in the colonial South, the official tax-supported Church of England evoked considerably less enthusiasm on the part of parishioners. More organs graced private homes in the South than found use in churches.

Most musically sophisticated were the Moravian settlers in Pennsylvania and North Carolina. These largely Germanic people copied, performed, and even composed new chamber pieces that were far superior to the general level of musical accomplishment in the colonies. Baptists, Methodists, Lutheran, Dutch Reformed, and other Protestant denominations all rose in importance through the 1700s, but Catholics were persecuted (especially in Maryland) and flourished only after the Revolution brought true religious freedom. Native Americans and African Americans were in many cases Christianized, and the rise of the Negro Spiritual as a popular choral style after the Civil War is attributed to musical interactions dating back well into colonial times.

Two general sorts of military music are associated with early America, mostly during the late colonial period and the Revolutionary period. A "Band of Musick" consisted of professional musicians hired by officers to play contrapuntal music at parades, during meals, and for dancing. This ensemble often consisted of oboes, clarinets, (French) horns, and bassoons. The other type of music was often referred to as "field music." This consisted of the fifers and drummers who played during the march, during battles, and for the various camp duty calls which regulated soldiers' lives.