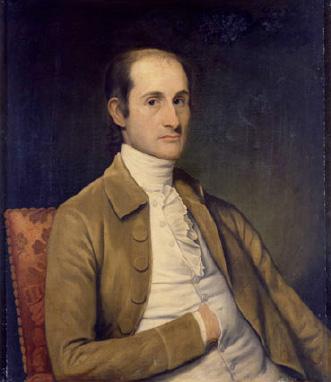 In a war of intelligence, the ciphers and codes employed by each side often spelled out the difference between success and failure. The Washington Library acquired a cipher from the 18th century.

Although John Jay was better known for his contributions to the Federalist Papers, the treaty that bears his name, and his legacy as the first Chief Justice of the United States, he was also an active “agent” of the era. He was well-known for frequently changing code on a whim, thus causing confusion. His correspondence reveals several puzzling letters where the code is not known nor understood. Recognizing the need for a reasonable solution, he turned, at one point, to a book code – one derived from The royal dictionary abridged…by Abel Boyer (London, 1771). This book code wasn’t used for long, yet it was used in important correspondence between Charles Thomson, secretary of the Continental Congress, and John Jay. Using the code, the men corresponded about the siege at Charleston, changes in Congress, and the expectation of assistance from the French naval fleet.

John Jay explained his proposed cipher to Charles Thomson in a message dated February 29, 1780: “Use the second part of Boyer’s Dictionary where the English is placed before the French – it is not paged – you will therefore number the pages beginning with page – Letter A and so on regularly [when you work add five to the number of the page]. There are three columns – distinguish them – a _ under the first figures denotes the first, a _ under the second, the second, and a _ under the third, the third. Count the words from the bottom including the one you use and to the amount add 10…The dictionary I have is the thirteenth edition and was printed in London in the year 1771…” Since the dictionary did not include every word, proper names and places for example, Jay continued in his letter to include a list of Roman numerals for frequently used names and places.

The recently-acquired cryptic letter, penned by Thomson on June 7, 1780, begins with a suggestion of revised code, which the author himself immediately implements, “I recd. your favor of 29 Feby. Would it not be convenient to count down as well as up distinguishing the former thus 186 and the latter 166. I is still in LXIV.”

Continuing his message, Thomson launches into an update on important recent events, “I am afraid Ompnsubyjil rb 13 245. There is great 11 91 15 288 20 177 since you left us. Upyspow is in for LX. LVI has made a total change except XXXXIV. We are waiting with anxious appreciation for 23 31 12 371 19 216 & 27 31 from LXX. There has been an engagement in the West Indies between the two fleets, but the particulars are not yet come to hand. I shall do myself the honor of writing more fully soon..." 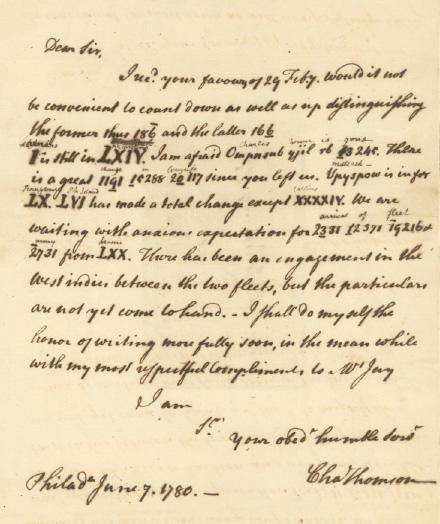 Primary Source: See a larger version of this letter

The decoded message is revealed in notes written on the document in John Jay’s hand. “I am afraid Charleston is gone,” Thomson relates, referring to the British forces’ occupation of Charleston in May 1780. His decision to conceal information about this significant setback is steeped in strategy. After enduring significant losses in the siege of Charleston, the American troops were left extremely vulnerable. It was critical to hide this weakness for as long as possible. As it would happen, the information was kept so secretive that few actually believed it to be true.

Thomson continues, “We are waiting with anxious appreciation for 23 31 12 371 19 216 & 27 31 from LXX…” Decoded by Jay, this sentence reads, “We are waiting with anxious appreciation for arrival of fleet & army from France.” Thomson is alluding to the relief that American troops expected from General Rochambeau, who would arrive in Rhode Island within a month’s time, bringing with him a strong naval fleet and 5,000 French troops. By shrouding this message in cipher, Thomson hopes to prevent the British from learning about the movements of their French enemies.

Through this cryptic exchange, Thomson and Jay ensure that messages which might weaken the American forces or encourage the British cause are kept within the colonial leadership.

The document is housed in the Fred W. Smith National Library for the Study of George Washington.