Mount Vernon had the opportunity to speak with famed historical artist Don Troiani. Don has had a lifelong interest in the American Revolution and has recently finished a new painting that shows General George Washington at the Battle of Yorktown. 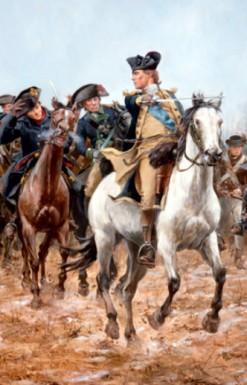 You have painted many remarkable Revolutionary War subjects. What interests you about this historical period?

Don Troiani: Growing up in Westchester County, NY I was always surrounded by Revolutionary history and as a young collector I often went digging for artifacts and collected Colonial weapons and accoutrements which still turned up in homes. Although I do a lot of Civil War and some 1812 subjects, the Revolution is my first love and I am trying to document the most important military events. I like the uniforms as well!

As an artist how do you go about selecting topics to paint?

DT: It’s a difficult question and it depends on quite a few factors. Information can be spotty and sometimes a subject has to be abandoned because of lack of information. It’s very different from writing as I have to show everything and sometimes details like the color of horse a particular officer might have ridden is just not known. Generally, though it’s just reading about something and it’s pictured in my mind.

As we speak you are completing a new painting that shows George Washington at Yorktown. Tell us about this new painting of yours.

DT: This is the General firing the first American gun after the battery was finished. The French had already completed their batteries and had commenced firing for a few hours by this point. A soldier from a New York regiment recalled the scene and described a large American flag being hoisted when Washington’s gun went off. 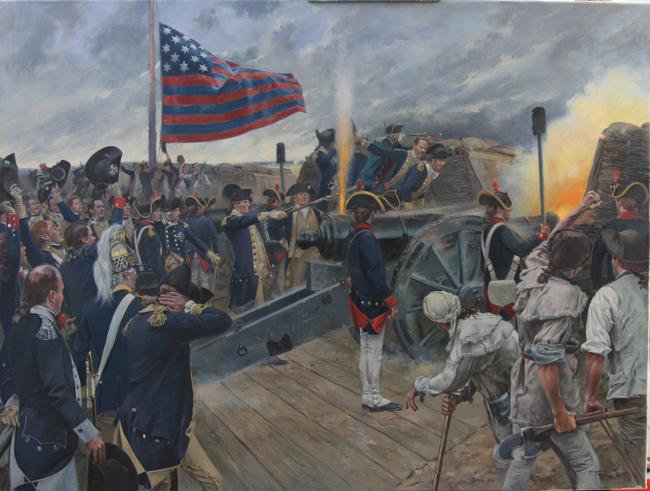 You are widely known as a painter that pays particular attention to historical accuracy. What sort of research went into this new Yorktown painting?

DT: Recreating the setting and background is often the most daunting challenge. First, all the available information has to be collected and other experts like Bob Selig and Jim Kochan were also consulted on details within their specialties. I visited Yorktown with Bob to see everything in person. Next all the information on the uniforms, artillery and other details are studied from primary accounts. Of particular value were several eyewitness accounts and orderly books and general orders covering the siege operations. A sketch by a French officer of a Continental Artilleryman provided some good insights to their actual appearance.

There’s been much early discussion about the artillery piece and its carriage at the center of the painting. Tell us more about the research behind that gun.

DT: There is some thought that a number of the Patriot cannon were mounted on garrison carriages , however , inventories I ran across of what was shipped to Yorktown from Philadelphia for the siege clearly stated that the large 18lb. and 24lb. guns were mounted on traveling carriages. Some garrison carriages are included on the manifests but seem to be without barrels. I suspect they were sent along in case they were needed for a special purpose. There was a good deal of redundant material sent to allow for damage during the fighting.

The distinctive red and blue flag above the gun emplacement may not be familiar to most.

DT: I based that on a period sketch done from across the river, it’s not very detailed but shows that the flag definitely had either blue and red stripes also possibly white. 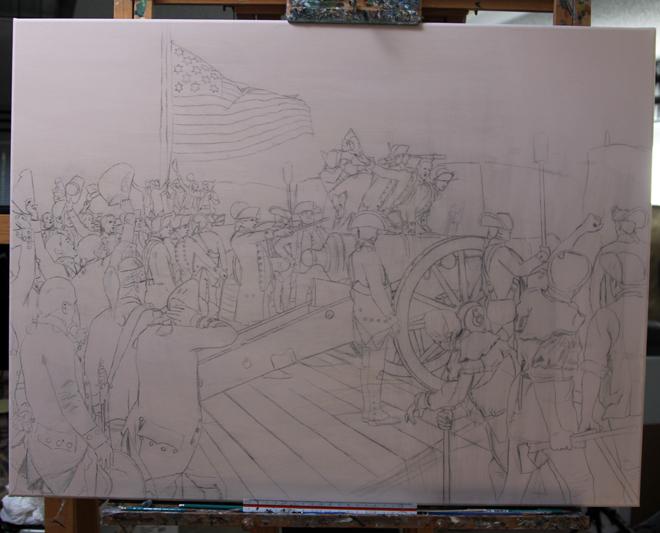 DT: I think when he rallied his troops at Princeton and led them forward into the hail of enemy fire heedless of the dangers to himself. I did a painting of that and it was a challenge to show the General in action as he is rarely portrayed that way. After all the stoic paintings which show him brooding, it’s easy to forget he was in his physical prime and an excellent rider. 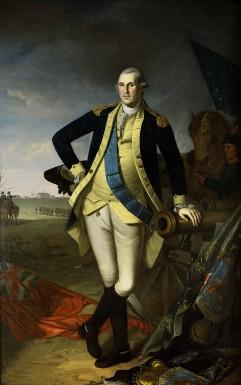 Did Washington’s uniform change much over the years of the war?

DT: Washington was always austere when it came to fashion and his uniform was basically the same throughout the war, blue faced buff. There were changes in the cuffs, epaulettes, waistcoat and other details as the war progressed. The main alteration was the blue silk sash worn under the coat which designated him as commander in chief. This was part of a system of colored sashes and cockades that was abolished in 1779 with new regulations. After that the system of rank was based on epaulettes. This is a common mistake made by many artists who do not realize that early portraits of Washington do not reflect his appearance in the latter part of the war. He is described as wearing his own hair pulled back with a touch of powder, he did not wear a fluffy white wig contrary to films and other popular media.

As you look forward, are there other Revolutionary War subjects that you are looking to paint?

DT: There are many, I just hope I can get to them all before I shuffle off. My goal is to cover each major battle and event with at least one painting. The New York campaign of 1776 definitely needs some attention. I’ve done the battle of Fort Washington (Margaret Corbin) and Long Island and White Plains are in long range planning. Some of the important southern battles like Savannah and Camden are also on the “to do” list along with Quebec, and Trenton needs further consideration. Sometimes commissions dictate subject matter as well. I recently completed a painting of the Wyoming Massacre and another of Oriskany for the Oneida Nation. These were not under original master plan consideration but after digging into the research I realized that the significant frontier fighting was overlooked. Sometimes though a patron might say “what would you like to paint?” That’s my favorite!

You have a large collection of original period weapons and accoutrements. How do these artifacts help with your work?

DT: There’s nothing quite like knowing the original items inside and out and having them by the easel while you work. Often I pose models with original guns and swords (very carefully). Clothing and accoutrements are copied from the originals and over 50 years I’ve built up a pretty extensive prop department. Even that though, is a constant evolution as things I had made 20 years ago are outdated when new information surfaces and more accurate reproduction cloth becomes available. Over the last six or seven years I had all my Revolutionary and 1812 uniforms replaced by those made from Kochan- Phillips woolens which has improved my work a great deal.

Go to the Site

Learn more about Washington's 1781 victory at the Battle of Yorktown.