“We hold these truths to be self-evident, that all men are created equal...”

George Washington and his fellow patriots fought the American Revolution for liberty and equality. But these principles did not yet apply to thousands of enslaved people of African descent.

The war posed a difficult choice for enslaved African Americans:

A valet who endured seven years of war alongside George Washington

1775: Lee travels to Washington’s headquarters in Cambridge, Massachusetts. As valet, he manages the general’s equipment, helps him bathe and dress, and ties the ribbon around his hair each morning.

In Philadelphia, he marries Margaret Thomas, a free black woman.

1783: By war’s end, Lee is famous due to his association with the victorious general.

1799: Washington uses his will to free William Lee immediately, praising his “faithful services during the Revolution.”

Lee remains at Mount Vernon as a free man.

1811: William Lee dies. He is likely buried on the grounds of Mount Vernon.

1748: James is born into slavery in Virginia. He is assigned as manservant to William Armistead, Jr., when both are children. He learns to read and write in English and French.

1775: General Washington forbids African Americans from serving in the Continental Army. He later changes his mind due to manpower shortages.

1781: With his master’s permission, James joins the Continental forces under the Marquis de Lafayette. As a spy, he poses as an enslaved man who had run away to intercept British intelligence, first from Benedict Arnold and later from General Cornwallis.

Before the battle of Yorktown, James provides crucial details of British troop movements.

1783: An act of the Virginia Assembly frees certain enslaved men who fought for the American cause. James is not freed because he is considered a spy, not a soldier.

He petitions the legislature for his freedom.

1787: A letter of support from the Marquis de Lafayette helps James secure his liberty. He takes the surname Lafayette in tribute.

1818: As a veteran, James Lafayette begins collecting a pension. He lives on a 40-acre farm in Virginia with his family.

1824: During the Marquis de Lafayette’s tour of America, the Frenchman reportedly recognizes his former spy in a crowd and embraces him.

1775: Virginia Royal Governor, Lord Dunmore, offers freedom to slaves of patriot masters who flee to fight for the crown.

1781: Harry, a 40-year-old stablehand, is one of 17 enslaved people from Mount Vernon to escape on the HMS Savage, a British warship.

1782: Harry builds defensive earthworks during the Siege of Charleston. Most “Black Loyalists” were assigned to non-combat support services.

1783: At war’s end, Harry is among 3,000 African Americans evacuated by the British to a settlement in Nova Scotia.

He takes the last name “Washington.” Many fellow freedom-seekers had died of disease or were recaptured.

1791: After facing harsh conditions in Canada, Harry and his wife, Jenny, depart with nearly 1,200 other refugees for Sierra Leone in West Africa. Despite promises of land, the arrivals face discrimination and high taxes from British colonial authorities.

1800: Harry Washington joins many settlers in protesting unfair treatment and demanding rights in Sierra Leone. He is tried for rebellion and banished. 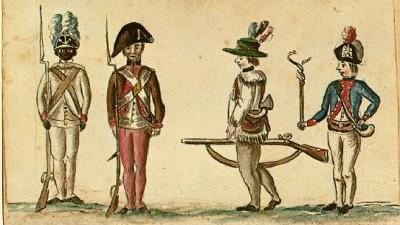 After fighting in primarily northern battles, the regiment marched south, where its troops helped secure American victory at Yorktown in 1781.

This watercolor of American foot soldiers during the Yorktown campaign depicts a member of the First Rhode Island Regiment on the far left. From the diary of Jean Baptiste Antoine de Verger, 1781. Courtesy of the Anne S.K. Brown Military Collection, Brown University

George Washington’s views on slavery changed during the Revolutionary War.

After the war, Washington grew critical of slavery and conflicted about being a slaveowner. He eventually used his will to emancipate the enslaved people he owned.

The content on this page was adapted from Give Me Liberty: African Americans in the Revolutionary War, a temporary exhibition in 2020 by George Washington's Mount Vernon.