Differences of opinion didn't concern President Washington. They could even be useful, until he came to realize (in 1792), the very personal nature of the differences between two of his cabinet members: Alexander Hamilton and Thomas Jefferson. 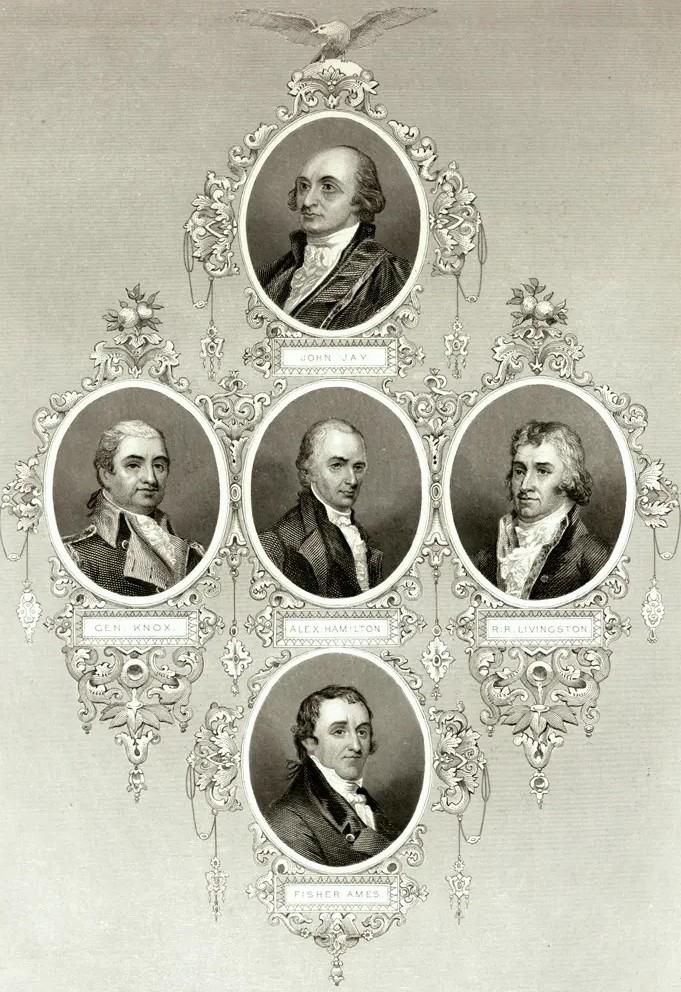 President Washington could also be very skilled in dealing with his cabinet, managing them in almost the same way that he had consulted with his staff of generals during the Revolution. He solicited each person’s opinion, opposed as they might be, considered his options, and made a decision.

Of course, when he selected Thomas Jefferson and Alexander Hamilton for his cabinet, he didn't know that they would become enemies. At first, they got along: Hamilton occasionally asked for Jefferson's opinions, and Jefferson nominated Hamilton for membership in the American Philosophical Society. It wasn't until Hamilton's economic policy began to take shape in late 1791 and 1792 that each man took a closer look at the other and began to wonder about what he saw.

This is one area in which George Washington created some of his own trouble. Eager to convince Jefferson and Hamilton to accept their offices, Washington was a bit too expansive in his descriptions of both jobs. In essence, he led each man to assume that his position was the most important position in the cabinet.

Hamilton became Secretary of the Treasury, convinced that he was a sort of Prime Minister; he often referred to "my administration." And Jefferson, as he boasted to Madison, believed that he was being put in charge of all of the domestic affairs of the nation. Obviously, this led each man to view the other as an intrusive busy-body consistently reaching beyond the bounds of his office.

Things were not made any easier by their obvious differences in personality, which became more apparent over time as their conflicting world views and policy choices came to the fore. Hamilton was many things that Jefferson was not: aggressive, confrontational, openly ambitious. The same holds true in reverse. Jefferson was many things that Hamilton was not: indirect, somewhat retiring, apt to work behind the scenes. Hamilton thus saw Jefferson as sneaky and hypocritical, someone with wild ambition who was very good at masking it. And Jefferson saw Hamilton as a wildly ambitious attack dog who would hammer his way into getting what he wanted. Their own notes and letters offer an insider's view of what it might have been like to have the two of them together in a cabinet meeting.

Jefferson's notes contain complaints about yet another of what Jefferson called Hamilton's forty-five minute jury speeches. And on the opposite side, Hamilton, as he noted in a letter to Washington, couldn't bear the fact that whenever something didn't go Hamilton's way, he could see Jefferson across the table smirking at him.

The relationship between George Washington and Alexander Hamilton was consequential for the lives of both men—and for the founding of the United States.

Matters weren't helped by Hamilton's habit of speaking frankly-usually, too frankly-about his political views. Luckily for historians (though, not so luckily for Hamilton), Jefferson often recorded such moments for potential future use.

For example, as Jefferson recounted in a note to a friend, one evening in 1791, Secretary of State Jefferson, Secretary of the Treasury Hamilton, Secretary of War Henry Knox, and Vice President John Adams were dining together at Jefferson's home. When dinner was over and the cloth was removed (as they put it in the 18th century), the conversation strayed into the subject of the British constitution.

To Jefferson, this story held the key to Hamilton's politics. “Hamilton was not only a monarchist,” he wrote, “but for a monarchy bottomed on corruption.” It was Hamilton's corruption- defined by Jefferson as his ability to sway Congress to his will -that most disturbed Jefferson. As he complained to Washington in 1792, Hamilton had at his disposal a "squadron devoted to the nod of the treasury." Out of the public eye and able to serve their own interests, such men would "form the most corrupt government on earth." To Jefferson, it was Hamilton and his self-interested friends, not the people, who reigned supreme.

Jefferson himself, he proclaimed repeatedly, had determined "to intermeddle not at all with the legislature... If it has been supposed that I ever intrigued among the members of the legislature to defeat the plans of the Secretary of the Treasury, it is contrary to all truth." As he explained it, he was guilty only of enunciating his "sentiments in conversation, and chiefly among those who, expressing the same sentiments, drew mine from me." In Jefferson's mind, such innocent conversations could scarcely be considered congressional intrigue. Jefferson’s protestations are convincing until we look more closely at the unfolding of some of his innocent dinner parties, which were sometimes deliberate attempts to test and reinforce the sympathies of potential supporters in the House.

Somehow, Washington had to rein in these two men and enable them to work towards some kind of common good-no easy task. In 1792, when he seems to have first realized the depth of the two men's hatred for each other, he wrote almost identical letters to them, pleading with them to try to get along. As he wrote in his letter to Jefferson,

How unfortunate, and how much is it to be regretted.., that whilst we are encompassed on all sides with avowed enemies and insidious friends, that internal dissentions should be harrowing and tearing our vitals. The last, to me, is the most serious-the most alarming-and the most afflicting of the two. And without more charity for the opinions and acts of one another in Governmental matters. … I believe it will be difficult, if not impracticable, to manage the Reins of Government or to keep the parts of it together: for if, instead of laying our shoulders to the machine after measures are decided on, one pulls this way and another that, before the utility of the thing is fairly tried, it must inevitably be tom asunder- And, in my opinion the fairest prospect of happiness and prosperity that ever was presented to man, will be lost-perhaps for ever!

Washington said essentially the same thing to Hamilton in a letter written three days later, writing in both letters a wonderfully unambiguous but diplomatic sentence assuring each man that the other one was getting scolded as well. "I do not mean to apply this advice to measures which are passed, or to any character in particular," he wrote. “l have given it in the same general terms to other Officers of the Government.”