George Washington led the charge to make this day of thanks a truly national event. 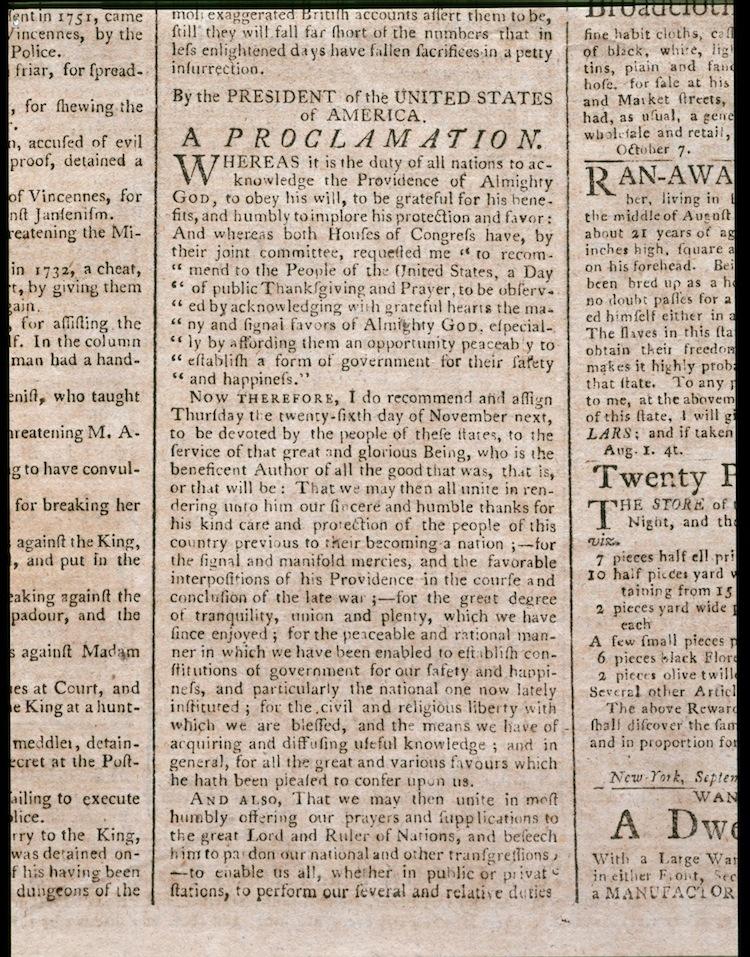 On October 3, 1789, George Washington issued his Thanksgiving proclamation, designating for “the People of the United States a day of public thanks-giving” to be held on “Thursday the 26th day of November,” 1789, marking the first national celebration of a holiday that has become commonplace in today’s households.

While subsequent presidents failed to maintain this tradition, it was Washington’s original proclamation that guided Abraham Lincoln’s 1863 Thanksgiving Proclamation. In fact, Lincoln issued his proclamation on the same day, October 3, and marked the same Thanksgiving Day, Thursday, November 26, as Washington, setting Thanksgiving as the last Thursday of November after our first president’s example. The proclamation was printed in newspapers, including the October 9, 1789, issue of the Pennsylvania Packet and Daily Advertiser.

“A Day of Thanksgiving”

George Washington first mentioned the possibility of a national Thanksgiving Day in a confidential letter to James Madison in August 1789 (just months after taking office), asking for his advice on approaching the Senate for their opinion on “a day of thanksgiving.”

By the end of September 1789, a resolution had been introduced to the House of Representatives requesting that “a joint committee of both Houses be directed to wait upon the President of the United States, to request that he would recommend to the people of the United States a day of public thanksgiving.” The committee put the resolution before the president and George Washington issued the first national Thanksgiving Proclamation within days.

George Washington knew the value of a thanksgiving day long before becoming our first president.

During the Revolutionary War, he would order special thanksgiving services for his troops after successful battles, as well as publicly endorse efforts by the Continental Congress to proclaim days of thanks, usually in recognition of military victories and alliances.

Even in the 18th century, the concept of Thanksgiving was not new to the citizens of the new United States.

Colonists often established Thank Days to mark certain occasions. These one-time events could occur at any time of the year and, emphasizing prayer and spiritual reflection, were usually more solemn than the Thanksgiving we observe today.

Thanksgiving was not made a legal holiday until 1941 when Congress named the fourth Thursday in November as our national day of thanks in answer to public outcry over President Roosevelt's attempt to prolong the Christmas shopping season by moving Thanksgiving from the traditional last Thursday to the third Thursday of November.

Mount Vernon is open 365 days a year, including Thanksgiving Day! Bring your family and friends to the home of the first president. Walk the grounds, explore the museum, and meet our special holiday visitor: Aladdin the camel.