Upon his election as President of the United States in 1788, George Washington’s reading took on a new urgency and focus.

In accepting the office, Washington faced the overwhelming and delicate task of defining a role that had never before been played on the world stage, a leader less than a king but more powerful than a prime minister. Article II of the Constitution outlined the duties of the executive, authorizing him to act as commander in chief of the military, to make treaties, to receive ambassadors, and to make recommendations to Congress, but it left much to interpretation. 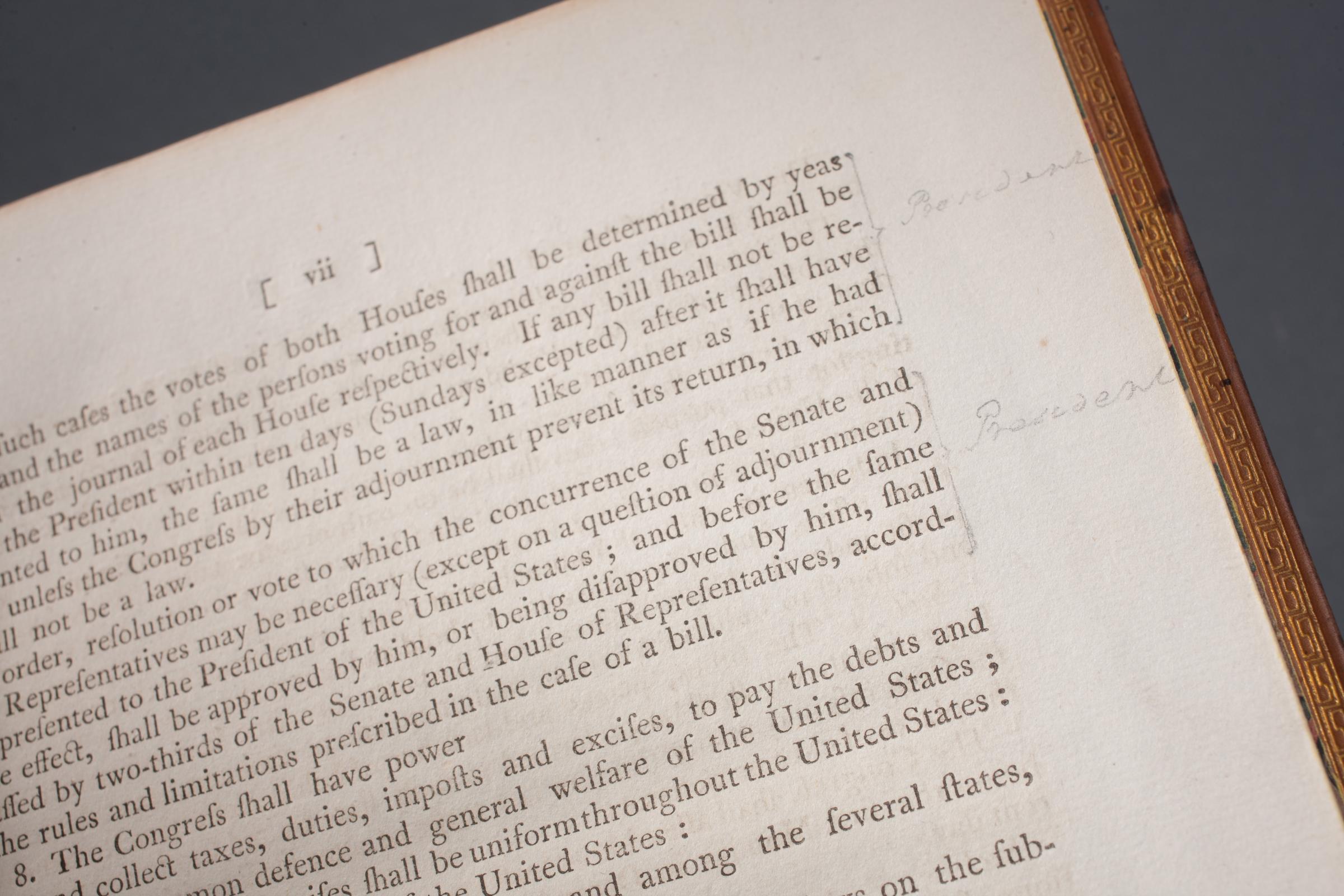 To define the presidency, Washington drew on his executive experience as commander in chief of the Continental Army and presiding officer at the Constitutional Convention, as well as his knowledge of legislative matters gained as a representative to the Virginia House of Burgesses. He recognized, though, that the decisions ahead of him regarding domestic laws and foreign affairs would require constant study.

To that end, he consulted the extensive reports of each of his cabinet members, read the pamphlets and newspapers articles on both sides of an issue, and kept current maps of the countries of the world. Well-aware of the time and energy required by these deliberations, he eagerly looked forward to what would become his greatest decision as president, the decision to retire after only two terms.

The Science of Politics

By Washington’s own definition, the makings of an excellent statesman went beyond traditional legal studies and embraced a well-rounded knowledge of the world. “Depth in the science of Politicks,” Washington believed, included familiarity with history, geography, world affairs, and general knowledge.

Washington’s reading before and during the presidency demonstrated his commitment to broadening his understanding of political science. From the histories of ancient and European governments, he sought lessons that could be applied to the American republican experiment. Familiar as he was with English politics, he attempted to expand his knowledge of international law, studying the great tomes on the subject by French and German authors. To keep abreast of changing political developments, boundaries, and new discoveries, he sought out the best maps available to expand his already extensive collection.

Just months after taking office, Washington ordered “a terrestrial globe of the largest dimensions and of the most accurate and approved kind now in use." Made by Dudley Adams, globemaker to King George III of England, it was doubtless consulted by Washington throughout his presidency. Afterward, Washington installed the globe in his study at Mount Vernon.

When Washington exhausted the reference resources in his own collection, he turned to the local library. Washington borrowed his first, and seemingly last, books from the New York Society Library on October 5, 1789. While there were no public, government-funded libraries in the United States at that time, subscription libraries such as the Society Library were numerous and offered borrowing privileges to paying members. During the period that New York City served as the capitol of the country, the Society Library extended its borrowing privileges to members of the new government. Its location was ideal, being housed in Federal Hall, the same building where Congress met.

George Washington enjoyed the honor of being the only president in history to be unanimously elected, not once but twice, yet despite this unequaled popularity, he endured some of the most bitter personal attacks ever launched at a sitting president.

Washington never shrank from hearing the worst. Throughout his presidency, he subscribed to newspapers that were routinely critical of his administration, as well as those that favored it. He regularly purchased the latest political pamphlets and took the time to read opposition views. Publicly, Washington preserved a dignified composure and held himself aloof from the political bickering. Privately, he confided his frustrations in letters to friends.

I fear, if the issue of public measures should not correspond with [my countrymen’s] sanguine expectations, they will turn the extravagant . . . praises which they are heaping upon me at this moment into equally extravagant . . . censures.

George Washington to Edward Rutledge, May 5, 1789

Only one publication in his library betrays his unedited response to attacks on his conduct as president: James Monroe’s A View of the Conduct of the Executive, published after Washington retired from office in 1797. Washington fired back, writing his own case against Monroe in the book’s margins.

George Washington’s copy of A View of the Conduct of the Executive, in the Foreign Affairs of the United States Connected with the Mission to the French Republic, During the Years 1794, 5, & 6 By James Monroe, 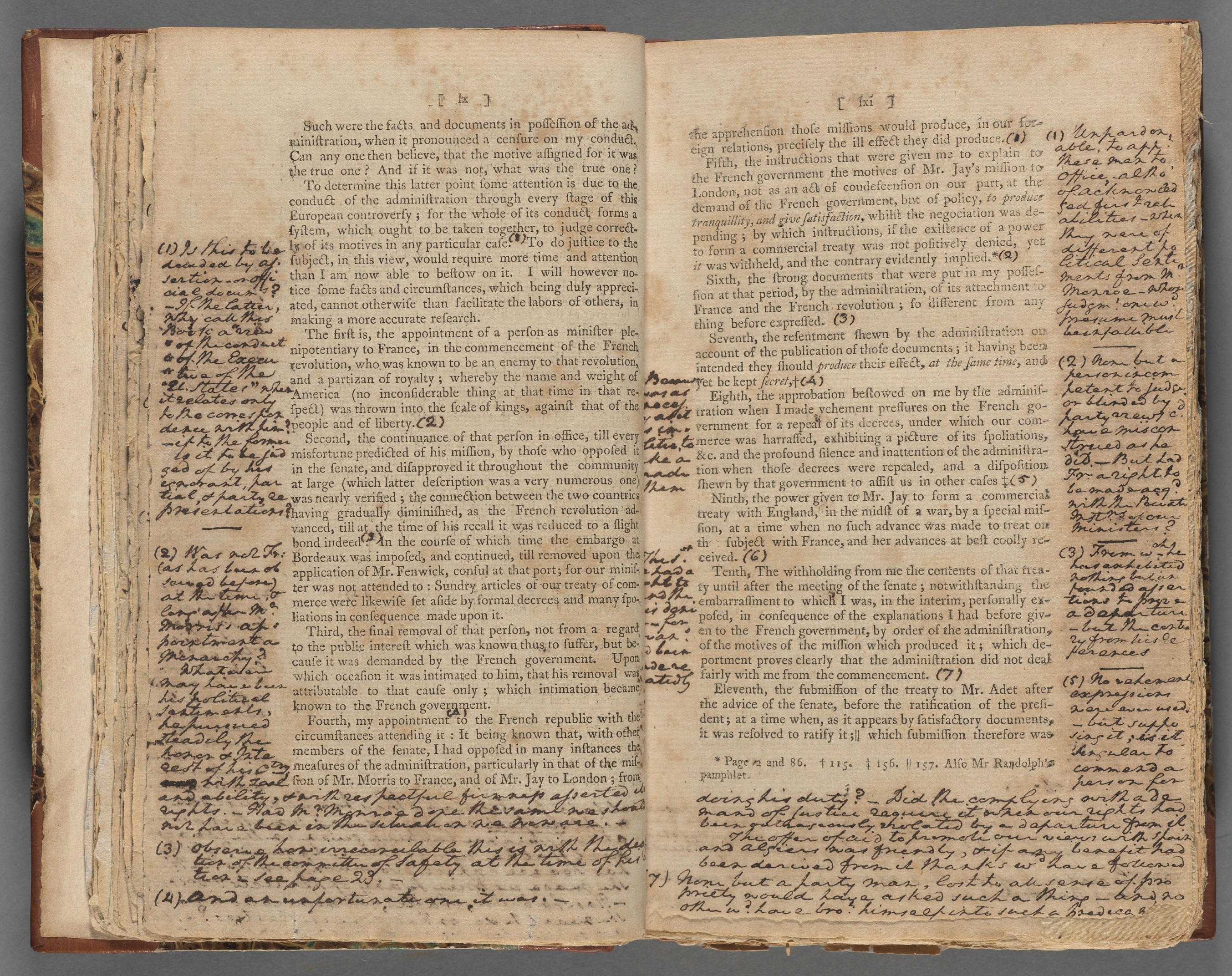 Washington’s extensive comments in this controversial book reveal the razor-sharp political convictions of the first president. It is one of only six known works in Washington’s library that are marked in some fashion (beyond a signature on the title page), and a rare surviving example of his reasoned, but passionate, response to criticism.

In his View of the Conduct of the Executive, James Monroe accuses Washington and his administration of making Monroe a fall-guy in the neutral United States’ negotiations with the warring France and England. Monroe had been sent to France on a goodwill mission in 1794. He was recalled in 1796 on the grounds that he had disobeyed his instructions and failed to advance the American interest.

On each page of the pamphlet, Washington numbered his comments and linked them to the text to which he was responding. In comment two on the right-hand page, Washington takes issue with Monroe’s action: “No reasoning can justify the measure – Nor no circumstances Warrant his relinquishm[en]t of our rights.” Like a lawyer preparing his case, in other notes Washington cites specific documents to counteract Monroe’s claims. Publicly, Washington remained silent and sought the opinions of others, wishing to hear them with “the most unreserved frankness.”

Personally, George Washington had made learning a lifelong quest, and he passionately believed that all Americans should have the opportunity to broaden their horizons. 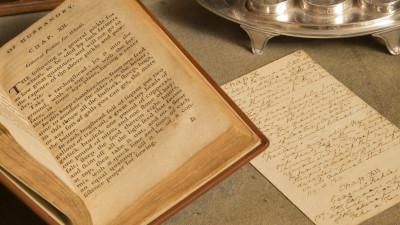