As a man of the Enlightenment, Washington was caught up in the quest to advance knowledge, better the human condition, and attain world peace.

The great debates of his day ranged from the weighty questions of the morality of slavery and the best form of government to scientific theories that, by modern standards, appear comical, such as the idea that the American environment produced inferior humans, plants, and animals compared to Europe.

For Washington and his peers, staying connected meant daily newspaper reading, picking up the latest pamphlet at the printer’s office, and writing letters that could take months to travel thousands of miles before reaching their recipients. Using paper-based media, social reformers, cultural elites, and ambitious citizens from around the globe traded goods and inventions, coordinated data-collection projects, and fomented revolution.

In the 18th-century, to be an American was to be part of one of the most literate cultures in the world. This was in large part due to a well-established press, run and patronized by a broad spectrum of the middle and upper classes, and the influence of Protestantism, which promoted literacy to encourage personal Bible study.

Short printed booklets stitched loosely together, with only a paper cover, if they had one at all — provided one of the quickest ways to voice opinions and start debates. Costing only a few shillings or cents, pamphlets were affordable to many and could be quickly published and distributed. Whether serious or satirical, in prose or poetry, they invited back-and-forth exchanges that often became heated and personal. Before, during, and after the American Revolution, pamphlets served as catalysts that transformed public opinion.

Washington purchased and received hundreds of pamphlets over the course of his lifetime. In his last years, he selected some to be bound together with spine labels such as “Tracts on Slavery,” “Political Sermons,” and “Miscellanies.” Those that he selected to be preserved and bound are believed to have been the writings that he found most influential or was most likely to reference again.

Whether the United States was really the land of opportunity and the hope of the future remained an open question in the years after the American Revolution. George Washington wholeheartedly believed the new republic to be “the most favorable Country of any in the world for persons of industry and frugality…to inhabit.” He paid close attention to the latest publications on American culture and natural resources, and privately recommended and shared his favorites with friends and associates.

When questioned by a prospective Scottish emigrant about the opportunities available in America, Washington responded enthusiastically. He refers him to several publications, including  Jefferson’s recently published Notes on the State of Virginia, which gives “the best idea of this part of the Continent to a Foreigner.”

Notes on the State of Virginia

Popular French authors, the Comte du Buffon and the Abbé Raynal, argued that life forms in the New World, whether human, animal, or plant, were inferior, and inevitably smaller, than those in the Old World. American authors used both facts and creative fiction to refute these ideas and make the new nation attractive to immigrants, who in turn could build up its industry and economy.

Thomas Jefferson’s Notes on the State of Virginia offered more than a physical description of his native state, advancing his own ideas regarding the future of Virginia, and by extension, the United States. In answer to a claim by Raynal that Americans would always be inferior to Europeans, Jefferson asserts “of the geniuses that adorn the present age, America contributes its full share.” He cites Washington as an example of American genius.

Towards a New Language

Washington’s commitment to bettering the human condition inspired an interest in languages. “To know the affinity of tongues, seems to be one step towards promoting the affinity of nations,” he mused.

In 1787, Empress Catherine the Great of Russia sponsored a monumental project to create a universal dictionary, containing over 200 languages from Europe, Africa, Asia, and America. Hearing of the project, the Marquis de Lafayette asked Washington to collect Native American vocabularies. Washington gladly complied, hoping that the dictionary would “one day remove many of the causes of hostility from amongst mankind.”

Washington asked Richard Butler to contribute vocabularies of several Native American languages to Catherine the Great’s universal dictionary project. Flattered, Butler sent a list of common nouns, adjectives, and phrases in Shawnee and Delaware, but acknowledged that a full study of these complex languages would require more time.

At the same time, Washington acknowledged that the goal of a universal language and world peace still seemed “visionary & chimerical.” Language reform had been the pet project of scientists and philosophers for centuries. Men from René Descartes to Thomas Jefferson had seen it as a means toward a more scientific knowledge of the world, world peace, and social and political transformation, but nothing had come of such schemes.

Upon his election as President of the United States in 1788, George Washington’s reading took on a new urgency and focus. 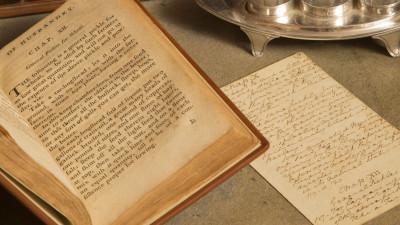