George Washington's systematic approach to reading is nowhere more evident than in his study of agriculture.

Washington developed a disciplined method of reviewing and recording new information in pocket-sized notebooks, testing theories in the fields, and recording results in his diary. He introduced new equipment and methods, re-trained enslaved and hired workers, and shifted from a single cash crop—soil-depleting, labor-intensive tobacco—to multiple income sources derived from wheat farming, fisheries, and later, a distillery. 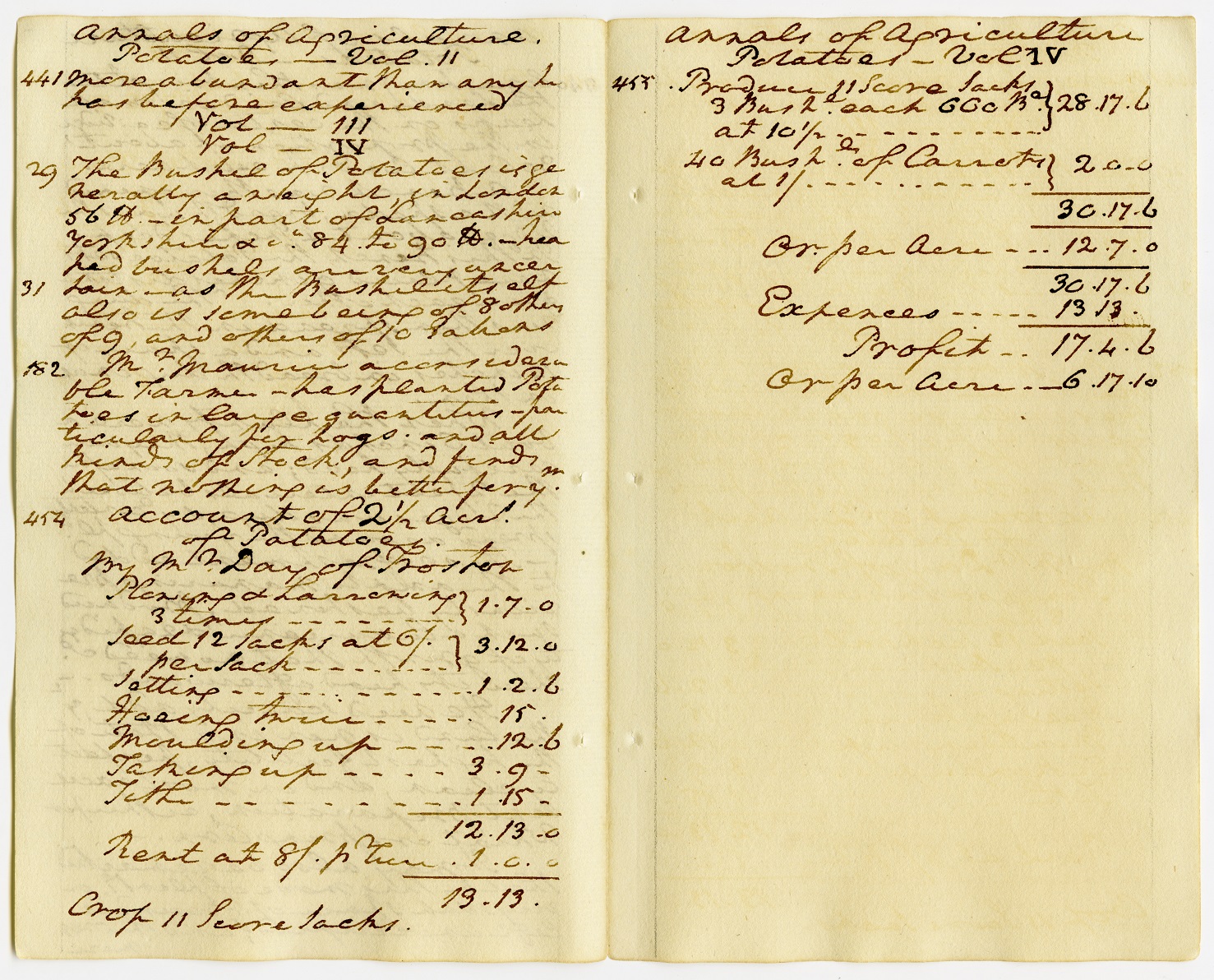 In adopting these practices, Washington became a leader for agricultural and economic change in America. He believed that the fortunes of the new nation would depend on more responsible farming methods. He was angered by the needless exhaustion of the soil by farmers who, counting on an endless supply of western lands and fearing crop failure, showed no interest in discovering more sustainable methods. To reverse this trend, Washington supported better publications, societies for promoting agriculture, and the establishment of a federal board of agriculture.

Washington began studying the new husbandry soon after returning to Mount Vernon in 1759. His initial purchases of farming publications, such as Edward Weston’s A New System of Agriculture; or, A Plain, Easy, and Demonstrative Method of speedily growing Rich, reveal his early entrepreneurial instincts.

Washington took a systematic approach to his study of farming. In 1760, he began a diary with daily observations on the weather, notes on each day’s fieldwork, and the progress of his experiments. He collected the most recent guides to agricultural practice and theory.

Avoiding the so-called “book-farmers,” whose only knowledge of farming was on paper, he focused instead on writers whose recommendations were backed by experience and close observation. He then used pocket-sized notebooks to record detailed notes on authors he found most helpful. Over the course of his lifetime, he produced more than 700 pages of notes on agriculture, contained in seven bound booklets and additional loose pages.

Washington regularly shared the latest farming treatises with his farm manager, William Pearce, as an informal means of continuing education.

By looking into some of the farming books I lent you, you will discover the quantity of Pease to allow to the Acre.

In his quest to become a successful farmer, Washington became an enthusiastic convert to the “New Husbandry” farming methods advocated by British and French agriculturists. He read about and then adopted a wide array of experimental farming methods such as crop rotation, the use of different fertilizers and new tools, and new breeds of livestock.

Even as Washington advanced sustainable agriculture at Mount Vernon, he lamented the “ruinous” farming practiced throughout the United States. Overcoming American farmers’ resistance to change would require new information networks.

When the energetic English agricultural reformer Arthur Young presented Washington with The Annals of Agriculture, Washington saw a way forward. “Your annals shall be this guide [to better practices],” he predicted. Washington’s correspondence with Young and progressive farmers on both sides of the Atlantic established the connections through which these ideas, as well as books, seeds, and tools, could travel.

At Young’s request, Washington relayed a copy of the Annals to the recently established Philadelphia Society for Promoting Agriculture (PSPA), which supported research and experimentation. The PSPA exchanged ideas with similar societies in other states, and several members contributed directly to the Annals, reaching a trans-Atlantic audience. Closer to home, Washington shared his latest findings with his farm manager and local planters.

At Washington’s request, Young sent him two plows. In the letter that followed them, Young commented on their use and also included a plan for a barn. Washington built the huge brick structure recommended by Young at his outlying farms. A visiting Frenchman observed that the barn and barnyard “were innovations in Virginia, where they have no barns and do not store fodder for cattle.”

Plan for a Barn, Arthur Young to George Washington, February 1, 1787, Courtesy of the Manuscript Division, Library of Congress

Washington rarely wrote in his books. Instead, he developed a system of note-taking, using loosely-bound, pocket-sized, blank books. 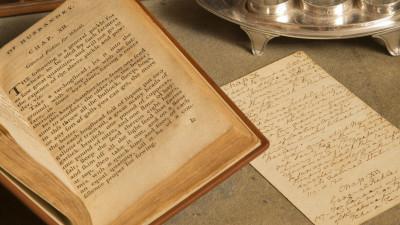