In his will, written several months before his death in December 1799, George Washington left directions for the emancipation of all the slaves that he owned, after the death of Martha Washington. 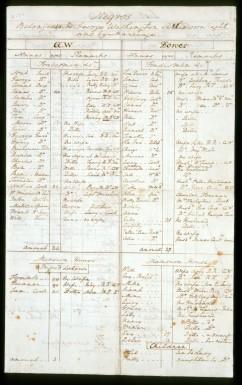 Washington was not the only Virginian to make provisions to free his slaves during this period. In 1782, toward the end of the American Revolution, the Virginia legislature made it legal for slave holders to manumit their slaves, without a special action of the governor and council.

Of the 317 slaves at Mount Vernon in 1799, 123 individuals were owned by George Washington and were stipulated in Washington's will to be freed upon his wife's death. However, these conditions did not apply to all slaves at Mount Vernon. When Martha Washington's first husband Daniel Parke Custis died without a will, she received a life interest in one-third of his estate, including his slaves. The other two-thirds of the estate went to their children.

Neither George nor Martha Washington could free these dower slaves by law. Upon her death the slaves would revert to the Custis estate and be divided among her grandchildren. By 1799, 153 slaves at Mount Vernon were part of this dower property. Forty more slaves were rented from a neighbor, while another man, Peter Hardiman, was rented from the widow of Martha Washington's son. All these people would eventually return to their owners.

In accordance with state law, George Washington stipulated in his will that elderly slaves or those who were too sick to work were to be supported throughout their lives by his estate. Children without parents, or those whose families were unable to see to their education were to be bound out to masters and mistresses who would teach them reading, writing, and a useful trade, until they were ultimately freed at the age of twenty-five. Washington’s will stated that he took these charges to his executors very seriously: "And I do moreover most pointedly, and most solemnly enjoin it upon my Executors...to see that this clause respecting Slaves, and every part thereof be religiously fulfilled at the Epoch at which it is directed to take place; without evasion, neglect or delay, after the Crops which may then be on the ground are harvested, particularly as it respects the aged and infirm."

Martha Washington chose to free her late husband’s slaves early. She may have feared for her safety in a situation where the freedom of so many depended on her death. In December 1800, Martha Washington signed a deed of manumission for her deceased husband's slaves, a transaction that is recorded in the abstracts of the Fairfax County, Virginia, Court Records. They would finally become free on January 1, 1801.

Transcript of Washington's Last Will and Testament