In 1799, this estate was home to a community of 317 enslaved men, women, and children who had no choice but to live here. George and Martha Washington relied on enslaved labor to keep their household functioning and their plantation profitable.

At Mount Vernon, many original structures in which enslaved people lived and worked survive. These tangible spaces, along with discoveries made by historians and archaeologists, help us better understand the lives of individuals who were held in bondage on this estate. We invite you to learn about a few of the people who lived and toiled here as you explore the estate. 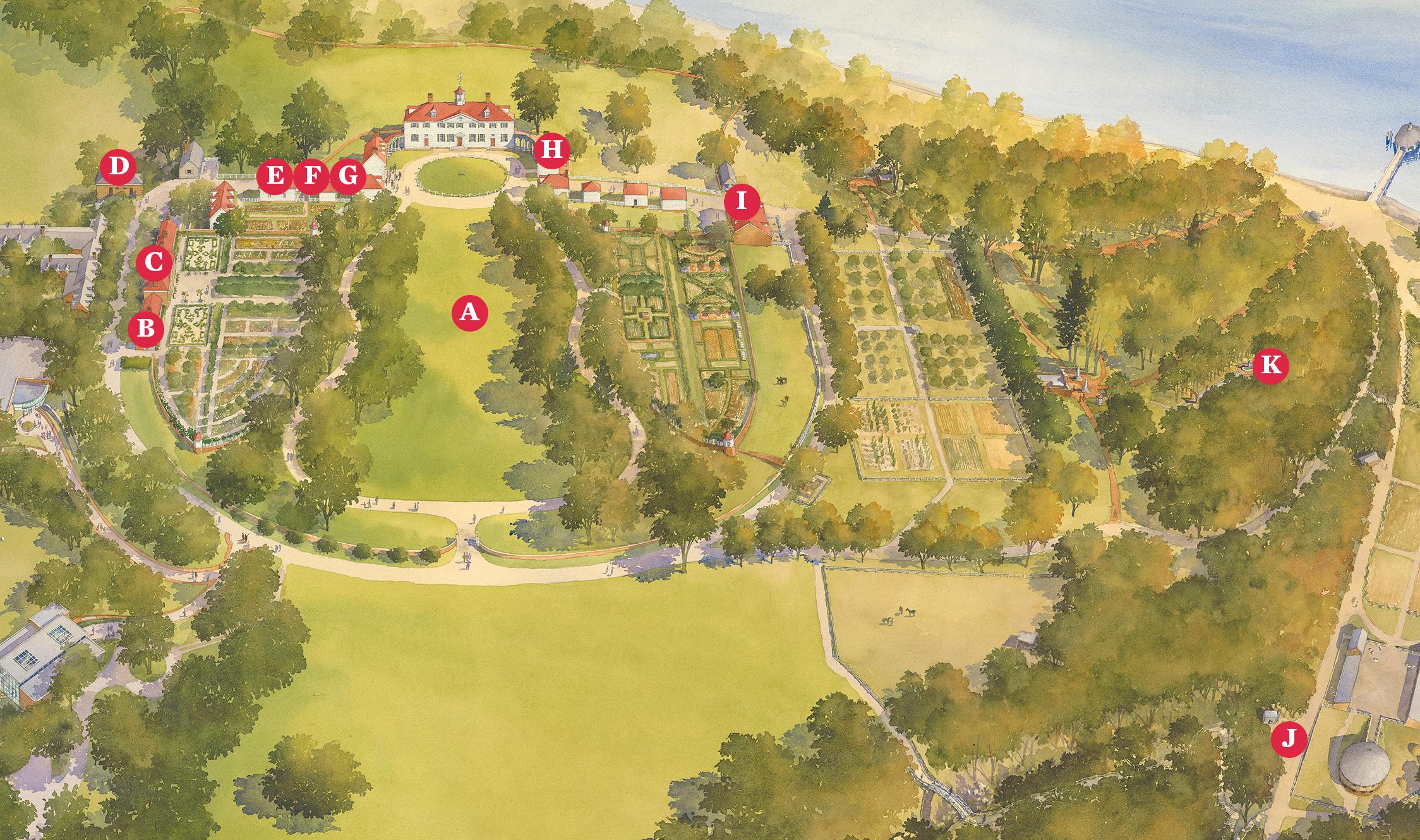 In 1799, the year that George Washington died, Mount Vernon encompassed 8,000 acres of land divided into five farms. This area was part of Mansion House Farm, the hub of the plantation. While the majority of the enslaved workers at the four outlying farms toiled in the fields, most of those at Mansion House Farm worked in the house or were skilled in one or more trades.

Enslaved workers built and maintained almost everything you can see from the Bowling Green. Although Washington developed the detailed plans, it was the enslaved workers who carried out most all of the arduous work.

Enslaved workers typically labored from sunrise to sunset, Monday through Saturday, with about two hours off for meals. As the seasons changed, so did the workday—7.5 hours in winter, and as long as 13 hours in summer. Those who worked in the house were always “on call” and might work even longer hours. Enslaved people also did their own housekeeping, prepared their meals, and tended their personal gardens. Socializing, worship, music, and recreation occurred in rare leisure hours.

Originally constructed by enslaved bricklayers and carpenters in 1791-92, this structure was rebuilt in the 1950s after it was destroyed in an 1835 fire.

Four bunkrooms designed by George Washington provided barracks-style quarters for many of the more than 80 enslaved people living at Mansion House Farm in 1799. Others lived above the outbuildings where they worked. A few families at Mansion House Farm, and all of the enslaved people on the plantation’s outlying farms, lived in small log dwellings. A replica Slave Cabin is located at the Farm.

Ona Judge, an enslaved lady’s maid to Martha Washington, may have lived in these quarters. Born at Mount Vernon around 1774, Ona Judge was the daughter of a dower slave, Betty, and an indentured English tailor, Andrew Judge. Like her mother, Judge was a skilled seamstress and was one of the enslaved people who accompanied the Washingtons to New York and Philadelphia during the presidency. On May 21, 1796, Ona Judge walked out of the presidential mansion in Philadelphia while the family was eating dinner. With the help of local friends she secured passage to New Hampshire.

In May 1768, George Washington purchased teenage brothers Frank and William Lee. Frank Lee eventually became the butler in the Mansion. William Lee served as Washington’s valet and accompanied him throughout the American Revolution.

By all accounts, William Lee was an accomplished horseman who kept pace with the General. He was also responsible for many of Washington’s possessions used during his military service.

After the war, William Lee injured both of his knees in separate accidents and was unable to continue serving as Washington’s valet. He became the shoemaker at Mount Vernon, a job he could perform while seated. Lee was the only enslaved person whom Washington freed immediately upon his death.

Washington hired a German immigrant, Dominicus Gubner, to train two enslaved men, Nat and George, as blacksmiths. An 1803 receipt shows that George, who was freed along with the other Washington slaves in 1801, remained at Mount Vernon and was paid for his work as a blacksmith. George signed the receipt with an “X,” indicating that he could not write. George’s wife, Lydia, and their daughter were dower slaves who lived and worked on one of the outlying farms. Although George received his freedom, his family did not.

Each of Washington’s five farms was supervised by an overseer who was usually a hired white man or, less commonly, an enslaved African American man. The overseers, who reported to the manager of the entire estate, were required to submit a written weekly account of the work done at their particular farms.

Davy Gray was an enslaved overseer. In this role, Gray had the ability to act as a mediator between Washington and the enslaved laborers; in one instance, he convinced Washington to increase the workers’ rations.

Davy Gray was married to Molly, who was also a dower slave. It is believed that Nathan, who cooked for the Washingtons at Mount Vernon in the late 1790s, was Gray’s son. The identity of Nathan’s mother is unknown, but she was a Washington slave, a status that her son inherited. Nathan was freed after Washington died, while Davy Gray remained enslaved.

In this building, enslaved women spun linen thread and wool yarn, which hired weavers made into cloth. These textiles were distributed to enslaved seamstresses, who made clothing for the enslaved population. Some of the yarn was made into stockings by enslaved knitters, typically men and women who were disabled or too old for strenuous work.

Alce (pronounced Al-sie), an enslaved spinner, was part of a large multi-generational family at Mount Vernon. The matriarch of the family was her mother, Doll, who came to Mount Vernon with Mrs. Washington as an enslaved cook in 1759. When she arrived here at age 38, Doll had six children including Peter, who was a knitter and described as “lame”; Lucy, a cook, who married Frank Lee, the butler; and Alce, who had seven children. One of Alce’s sons was Christopher Sheels, who became Washington’s valet when he returned from the presidency. Sheels and his wife, who lived on another plantation, made an unsuccessful attempt to run away a few months before George Washington’s death.

The tools, barrels, rum, beehives, and bolts of cloth inside the locked storehouse were expensive and extremely valuable. From this building, overseers issued the supplies enslaved workers needed to do their jobs, such as nails for the carpenters or thread for the shoemaker.

Surviving evidence indicates that enslaved people at Mount Vernon resisted bondage in a variety of ways such as pretending to be sick, procrastinating, producing shoddy work, or misplacing and damaging equipment. They were also sometimes accused of theft. Stealing food and supplies allowed them to supplement their limited rations, as well as resist Washington’s authority.

The daily food ration for an enslaved adult consisted of about four cups of cornmeal and five to eight ounces of protein, usually salted, dried herring. Many enslaved people supplemented rations by keeping gardens by their quarters, raising poultry, and hunting and trapping wild animals. Each year, Washington distributed to enslaved people an allotment of basic clothing made of coarse linen and wool, as well as one pair of shoes and one blanket.

The most extreme act of resistance, running away, carried a high risk of detection and severe punishment. Yet a number of Mount Vernon’s enslaved people, including those who worked closely with the Washingtons, took opportunities to escape. Martha Washington’s maid, Oney Judge, and Hercules, a cook, both escaped successfully at different times during Washington’s presidency.

Hercules, who was known for his superior culinary skills, was taken to Philadelphia by the Washingtons to cook for the presidential household. Mrs. Washington’s grandson described the chef as “a celebrated artiste . . . as highly accomplished a proficient in the culinary art as could be found in the United States.” Hercules earned money by selling “slops”—things such as feathers, bones, animal fat, and used tea leaves—from the presidential kitchen. This income allowed him to purchase fine clothes, accessories, and other goods not usually available to the enslaved. Nevertheless, Hercules longed for freedom.

He successfully escaped from Mount Vernon on February 22, 1797. Despite Washington’s efforts to recapture him, Hercules was never apprehended. A short time after the cook’s escape, a visitor to Mount Vernon asked one of Hercules’s young daughters if she was upset that she would never see her father again. Her answer surprised him: “Oh! Sir, I am very glad, because he is free now.”

A Day in the Life of an Enslaved Cook

Both enslaved men and women served as cooks at Mount Vernon and much was expected of them each day.

I
Coach House, Stable, and Paddock

Peter Hardiman, an enslaved groom whom Washington rented from a relative, oversaw the stable’s operations. By 1787, Hardiman was married to Caroline Branham, a housemaid and seamstress, and they had six children. Although the state of Virginia did not recognize marriages between enslaved people, Washington did. He also was reluctant to break up families of enslaved individuals. Washington worked out a long-term contract through which he obtained permission to keep Hardiman at Mount Vernon.

Wilson, the couple’s oldest son, followed in his father’s footsteps as groom. The teenager led Washington’s horse in his funeral procession on December 18, 1799. After Mrs. Washington’s death, Caroline Branham and her children—all dower slaves—were inherited by George Washington Parke Custis and moved to his home, Arlington House. Hardiman later joined them there, where he continued to care for horses, donkeys, and mules.

This replica cabin represents quarters for a family of eight living on Dogue Run Farm. The people of Mount Vernon’s enslaved community had diverse ethnic and geographic origins. By 1799, only a few enslaved people at Mount Vernon had been born in Africa. Some came from families that had been in America for generations.

Regardless of birthplace, enslaved people were considered “chattel,” or property, by law. Children born to enslaved women were also slaves from birth. Their status could not change unless they were freed by their master or purchased their freedom.

In 1929, the Mount Vernon Ladies’ Association placed a commemorative marker noting the site of the 200-year old slave cemetery. We believe this marker to be the earliest of its kind on a historic plantation. Despite this oﬃcial recognition, the burial ground lay unattended in dense underbrush for years.

In the early 1980s, a group of citizens began a concerted effort to honor the enslaved people of Mount Vernon. In 1982, a reporter from The Washington Post broadly publicized evidence of the forgotten slave cemetery. By 1983, these efforts resulted in action when the Mount Vernon Ladies’ Association dedicated a new memorial, which was designed by students attending the architecture school at Howard University. The Association, in partnership with Black Women United For Action, now holds an annual ceremony at this spot in tribute to the generations of enslaved people who lived and worked here.

There is no record of the number or identities of those enslaved people interred in the cemetery. William Lee, who died many years after he was freed in 1799, is thought to be buried here. Mount Vernon was inherited by George Washington’s nephew, Bushrod Washington. One of his former slaves, West Ford, may be buried at this site. After receiving his freedom in about 1805, Ford established a free black community at Gum Springs, just north of Mount Vernon.

In 2014, Mount Vernon launched a project to thoroughly document the locations of individual burials at the cemetery. The goal of this multi-year survey is to commemorate the lives of those free and enslaved individuals who lived and died at Mount Vernon by creating a map showing the exact location of individual grave sites. No human remains will be disturbed.

Archaeology of the Slave Cemetery at Mount Vernon