The majority of enslaved people at Mount Vernon were assigned to agricultural work on the plantation’s four outlying farms.

Under the supervision of overseers, field hands toiled from sunrise to sunset, which could mean 14-hour days in the summer. They planted and harvested Mount Vernon’s major cash crops—first tobacco and later wheat—as well as corn, vegetables, and grasses. Most field workers were women, as men were more likely to be trained in a trade.

Washington was a strict taskmaster to all of his workers, both hired and enslaved. He expected laborers to share his enthusiasm for the plantation’s success and work diligently to execute his plans, though they did not stand to benefit from his innovations.

At Dogue run—The Women began to hoe the Swamp they had grubbed in order to prepare it for Sowing in the Spring with grain and grass Seeds. 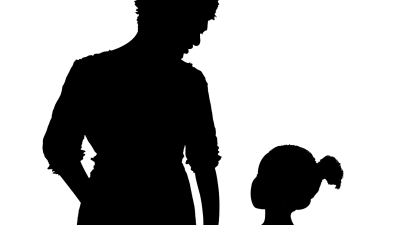 Priscilla, a mother of six, was assigned to agricultural labor on Dogue Run Farm. She lived there with her children, apart from her husband, Joe, who was a ditcher at the Mansion House Farm. Priscilla twice attempted to escape Mount Vernon, but she was recaptured both times. 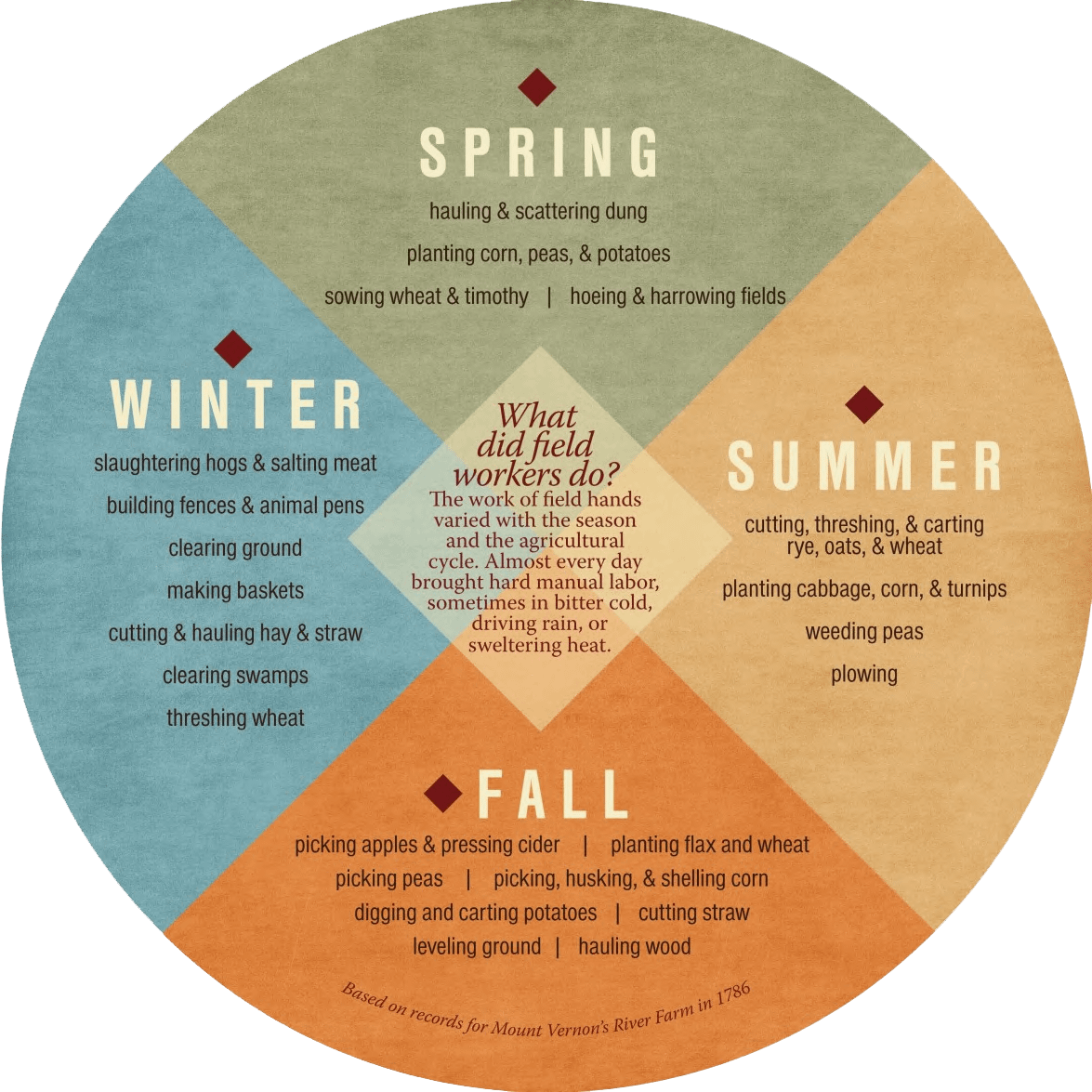 Field hands endured long hours of strenuous labor while also maintaining their own families and households. Explore the daily experiences of a field hand at Mount Vernon in this timeline.

Agriculture has ever been amongst the most favourite amusements of my life.

Washington saw himself as a farmer above all else. In the 1760s, he abandoned tobacco (the cash crop of most Virginia plantations) and began focusing on grains like wheat and corn, which were less labor intensive to cultivate. Washington hoped his plantation would become a model for other Americans. He eagerly read agricultural books and devised complex crop rotations and experiments, which were implemented by overseers and enslaved laborers.

I shall write to you ...by every Mondays Post, and shall expect a copy of the weekly reports by the Mail which leaves Alexandria on Thursday.

When in residence at Mount Vernon, Washington rode across his plantation daily to inspect progress. When away, such as during the presidency, he demanded exhaustive weekly reports from his plantation manager recording “in what manner the hands have been employed.” These reports reveal the grueling and diverse labor that enslaved people performed to grow and harvest crops, manage livestock, clear swamps for new fields, and move supplies across the plantation. Washington read each report carefully and questioned details he found dubious. 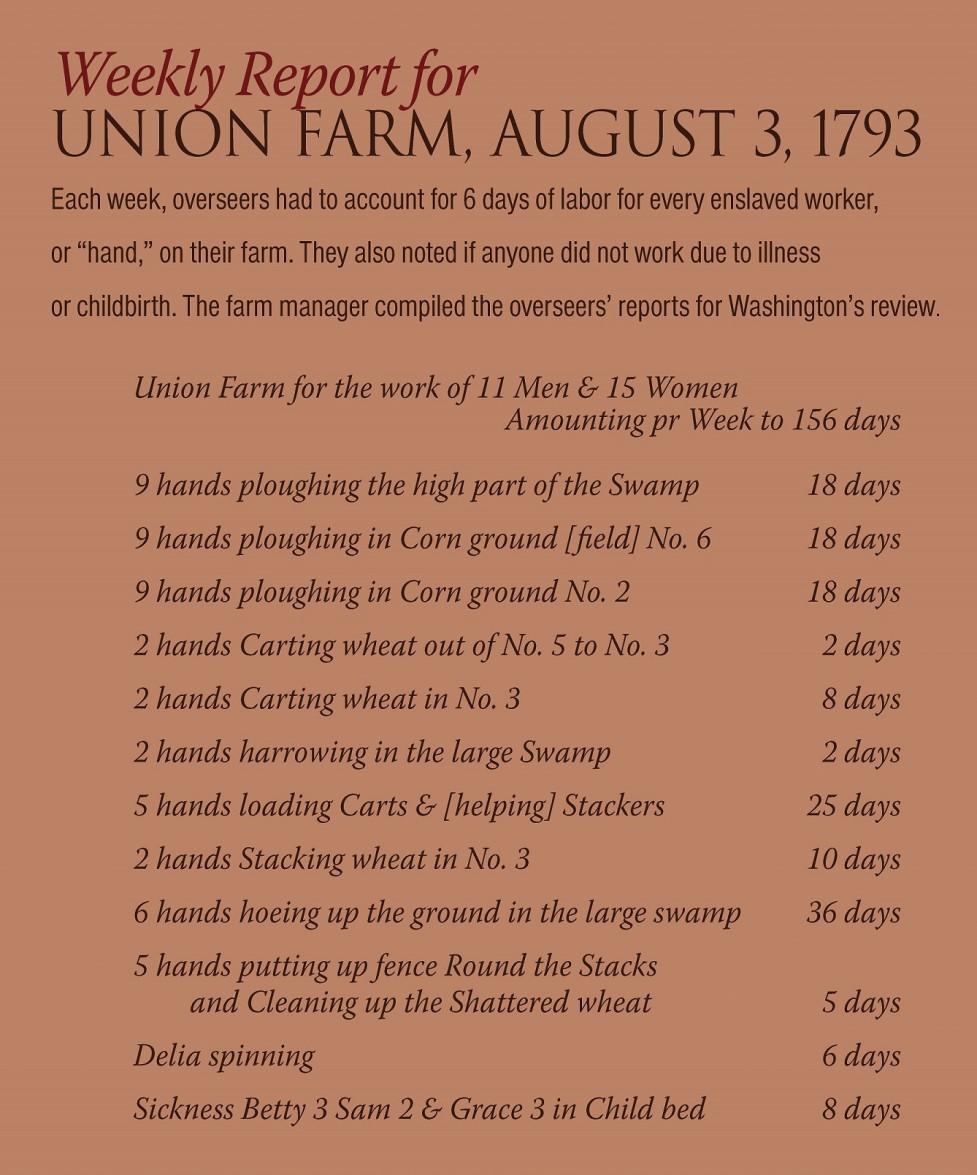 Keep everyone in their places, and to their duty.

Enslaved laborers were under the near-constant scrutiny of managers and overseers, who carried out Washington’s orders. Washington hired relatives, other Virginians, and occasionally men from England and Scotland to manage his plantation and supervise his farms. Each overseer lived in a house on his assigned farm, close to the slave quarters. Washington expected them to follow his instructions for planting and harvesting, maintain the pace of work, distribute food and clothing, and punish those who disobeyed orders. Several enslaved men, like Davy Gray, gained Washington’s trust and were appointed to the position of overseer. 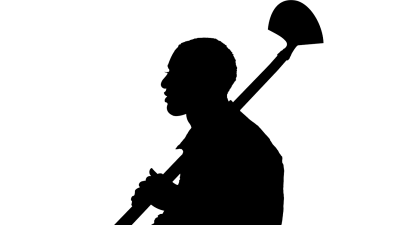 Davy Gray came to Mount Vernon as a teenager when George and Martha Washington married in 1759. He was one of several enslaved men who rose to the position of overseer. In 1793, Washington praised his work, noting, “Davy at Muddy-hole carries on his business as well as the White Overseers, and with more quietness than any of them.”

The standard rations enslaved people received were cornmeal and salted fish, which they harvested themselves. 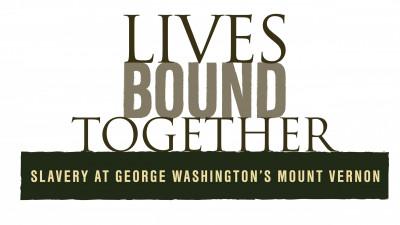