Much has been written about George Washington and his religious beliefs. Some even go as far as to suggest he did not believe in God, while others believe he was a Deist.

1. While rather private about his religious beliefs, George Washington was an Anglican.

The Washingtons attended services about once a month at two churches near Mount Vernon. During the Revolutionary War, Washington regularly attended services held by military chaplains and local civilian congregations. Often, when he was traveling, Washington would stop for services at whatever church was nearby, regardless of its denomination. Over the course of his life, he is known to have attended services at churches associated with the following Christian groups: Presbyterians, Quakers, Roman Catholics, Congregationalists, Baptists, and Dutch Reformed.

Throughout his time as a leader, in the army and civilian government, Washington encouraged the declaration of days of prayer and fasting as a means of seeking divine assistance in perilous situations and also supported the proclamation of days of Thanksgiving to praise God for his help. He and his other officers led church services during the French and Indian War because they lacked chaplains. During the Revolution, he ensured that there were chaplains of various denominations to meet the spiritual needs of his soldiers. He also encouraged them to stop swearing and gambling, because he told them it was unseemly to ask God’s favor on their efforts if they were constantly insulting him by their behavior.

2. Washington intended religious freedom in the United States to apply to all religions.

Shortly after his inauguration as president, religious communities began writing to Washington. He told these groups that the only being to whom Americans owed an explanation of their religious beliefs was God. When the Virginia Baptists wrote about their qualms that the new Constitution did not specifically guarantee freedom of religion, they went on to say that they knew they were in good hands with Washington at the head of the government. The President responded that he would never have signed the Constitution if he thought it would endanger the religious rights of any group.

There are some who believe that Washington was only speaking of religious freedom in regard to Christian denominations, but did not intend it to apply to other religions. To a Jewish congregation in Rhode Island, he noted that,

It is now no more that toleration is spoken of, as if it was by the indulgence of one class of people, that another enjoyed the exercise of their inherent natural rights. For happily the Government of the United States, which gives to bigotry no sanction, to persecution no assistance requires only that they who live under its protection should demean themselves as good citizens, in giving it on all occasions their effectual support.

Read all of the letters

President Washington's address to the Touro Synagogue advanced the subject of religious freedom in America. His letter included the now famous line, "the Government of the United States, which gives to bigotry no sanction, to persecution no assistance..."

Before the Bill of Rights, there was no assurance in the Constitution of religious freedom. Explore George Washington's role in the formation of the United States Constitution. 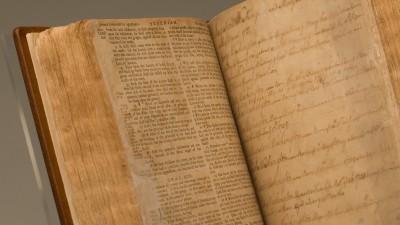 He was born "about 10 in the Morning" on February 11, 1731/32, according to the Julian calendar then in use. When England adopted the Gregorian calendar in 1752 (which we still observe today) this date changed to February 22, 1732 - the day Washington considered to be his birthday.

4. George Washington was chosen as a vestryman and churchwarden.

Washington served as a vestryman for both Fairfax Parish in Alexandria and Truro Parish in Fairfax County. He was also chosen by his fellow vestrymen to act as churchwarden for three terms.

The activities of each Anglican parish in Virginia during the 18th century were overseen by a minister and a group of 12 gentlemen, known as the vestry. These men were responsible for levying taxes to pay the minister’s salary and church budget, as well as upkeep and construction of church property, and care for the poor in the community. On a rotation basis, two of the vestrymen were typically asked to take on the position of churchwarden. It was these men who were responsible for the day-to-day hands-on work of the parish.

5. George Washington expressed little preference as to the religion practiced by the enslaved workers at Mount Vernon.

Religion offered comfort to those facing a life of bondage. Some enslaved people were Christian. They may have encountered Quakers, Baptists, and Methodists in the local area. Caesar, an enslaved field worker at Union Farm, was also a minister who preached to local black communities. Some enslaved people may have continued African religious traditions or blended a variety of spiritual beliefs into their daily lives.

6. While at Mount Vernon, George and Martha Washington worshiped at Christ Church in Alexandria and Pohick Church in Truro Parish.

Christ Church was about 10 miles from Mount Vernon whereas Truro Parish was only seven miles away. The Washingtons took a part in establishing Pohick Church. The Washington family maintained pews in both churches, however, attendance at either church required a roughly one-and-a-half- to two-hour trip by horseback or coach, each way. A scholar who closely examined Washington's diaries for evidence of church-going found that he typically attended an average of one Sunday per month, a frequency dictated in Virginia society by both custom and the law, prior to the Revolution. 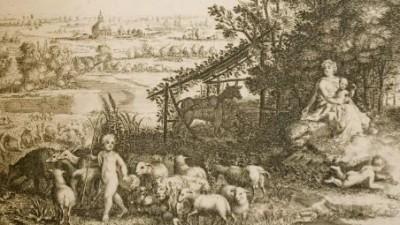 7. George Washington purchased a Bible for Martha Washington in New York on August 18, 1789.

Martha signed her name on several of the pages. This Bible contains six fold-out maps and nearly 300 copperplate engravings executed by John Sturt. It is also filled with family history, including the record of the marriage of Nelly Custis to Lawrence Lewis and birth records of their eight children. There are also newspaper clippings of obituaries for Eleanor Parke Custis, M. E. Angela Conrad, and Lawrence Lewis.

8. George Washington was a member of the Freemasons

Washington entered the Order of the Freemasons in October 1752 at the age of 20. Upon joining the Fredericksburg Lodge No. 4 in Fredericksburg, Virginia, Washington became a member alongside a number of influential Virginians.

In 1783, at the close of the Revolutionary War, a masonic lodge in Alexandria, Virginia, was chartered. The new lodge asked General Washington to be its first master. Washington accepted the position and became master of the newly formed Alexandria Lodge No. 22.

Learn more about Washington’s time as a mason

Historian Mary Thompson explores her book "In the Hands of a Good Providence: Religion in the Life of George Washington."