When the president retired from public life, Martha Washington had hoped for many years with her husband at Mount Vernon. This was not to be. 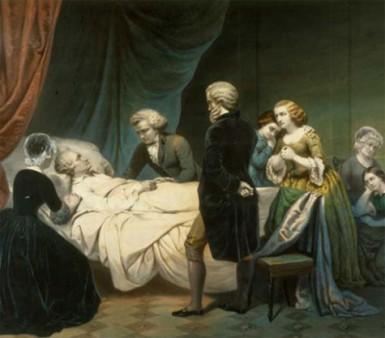 On December 14, 1799, only two and one-half years after leaving the presidency, George Washington died quite suddenly, soon after contracting a virulent throat infection.

Although the nation mourned, Martha Washington was bereft. She had suffered so many losses over the course of her life—having outlived four children, numerous relatives, and two husbands—she almost could not bear the pain. She closed up the second-floor bedroom that she had shared with George and moved to a room on the third floor, where she spent much of her day.

When in public, Martha Washington appeared in her mourning clothes, including a black lace shawl, black gloves, and black kid shoes. She sometimes also wore a mourning locket or ring, containing a strand of her husband’s hair.

Martha Washington was sixty-eight years old and a widow for the second time.

In the months after George Washington’s death, Mrs. Washington received thousands of condolence letters and hundreds of requests for mementos.

Visitors flocked to Mount Vernon and Mrs. Washington handled the onslaught as best she could. Fatigued and grieving, she often delegated routine household tasks and secretarial duties to trusted aides, enslaved individuals, and family members.

Mrs. Washington took solace in her family. Her grandchildren, Wash Custis and Nelly Custis Lewis, and Nelly’s husband, along with their two young daughters, still lived at Mount Vernon. Tobias Lear, her niece’s widower and her husband’s former secretary, resided there as well. Her other grandchildren, Elizabeth Parke Custis Law and Martha Parke Custis Peter visited, often bringing their children. These interactions enlivened her days.

In the months after George Washington’s death, a new threat to Mrs. Washington’s security arose. Under the provisions of his will, Washington had declared that the 123 enslaved people that he owned outright (separate from those controlled by Martha Washington's first husband's estate) were to gain their freedom after his wife’s death. Hearing the news, however, these enslaved people may have become restive. Rumors circulated about a suspicious fire at Mount Vernon that may have been set by some of those enslaved.

Fearing for her life, Martha Washington, at the urging of her nephew Bushrod Washington, decided to free her deceased husband’s enslaved community. On January 1, 1801, a bit more than a year after George’s death, Washington’s enslaved people gained their liberty.

Almost inevitably, Martha Washington’s thoughts turned toward her own death.

Always a religious person, she sought comfort in her faith. In later years, family members recalled that Mrs. Washington studied the Bible or read devotional literature almost every day.

One visitor remarked in 1801, “She speaks of death as a pleasant journey.” 1

Martha Washington’s health, always somewhat precarious, now declined precipitously. Just two and a half years after her husband and to the dismay of her extended family, Martha Washington died on May 22, 1802.